The central banks across the world responded to 2008 economic depression through banking bailouts and quantitative easing. The banks wanted to create demand in the market by putting money. The rise in demand was expected to revive the economy. Governments also responded to crisis by releasing fiscal stimulus to enable the recovery from one of the worst economic crisis in decades. There were only few countries like India which didn’t had to go into ‘debt trap’ for the recovery of the economy. Therefore Indian central bank (RBI) has the capacity to respond to another economic crises while most of the emerging market economies did not have the same. The global debt has reached to 182 trillion in 2017 which is 244 percent of the global GDP. “There is a positive relation between the debt to GDP ratio and the level of GDP per capita. If you compare around the world with the best economies or emerging market economies, the level of debt in India is lower,” the top IMF official said. 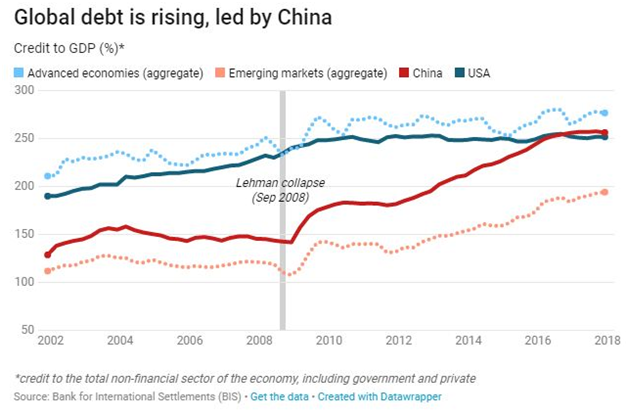 India’s public debt stands at 70.4 percent of GDP while private debt is 54.5 percent of GDP. This takes combined Indian debt to 125 percent of GDP while in comparison China’s debt is 247 percent of GDP. However, the differentiation between public and private debt in China is very tough, “The dividing line between what is public and private debt in China is blurry. This blurriness reflects the very large number of public units and corporations, the complex layers of government, and widespread subnational off-budget borrowing,” said Vitor Gasper, International Monetary Fund (IMF) Director of Fiscal Affairs Department. China’s debt has risen exponentially after 2008 economic crisis because China announced fiscal stimulus of 4 trillion yuan for the recovery of the economy. The global demand has dried up after financial crisis and China is export led country therefore its economy was hit hard. To compensate global demand from domestic demand it announced the fiscal stimulus which was almost 14 percent of the GDP.

The huge debt makes Chinese economy unstable. On the other hand India’s total debt is almost half of China’s total debt. In addition to that, China’s GDP is almost five times higher than that of India. Therefore total Chinese debt is around 30 trillion dollars and India’s debt is just 3 trillion dollar, 10 times lower than that of China.  “So, it’s very stable. So, what you do see is that emerging market economies, which is where India is, there’s a very fast buildup in private debt with a slowdown in the last two years, But India is basically steady. So, India is not an emerging market economy where leveraging is progressing fast,” Gasper said.

A few days back IMF cautioned India about rising Current Account Deficit (CAD) but also said that India is still the ‘fastest growing’ major economy in the world, a tag the country got by replacing the Red Dragon. IMF suggested the country should rationalize subsidies and increase tax compliance to curb the rising public debt, “A high interest burden and risks from rising yields also require continued focus on debt reduction (by India) to establish policy credibility and build buffers. These efforts should be supported by further reductions in subsidies and enhanced compliance with the goods and services tax,” said IMF. The debt in India is rising due to hike in global crude prices, however the situation is still controllable and the country has one of the best macroeconomic indicators among major economies. Therefore the chances of long dreamt double digit growth is high in the upcoming years if petroleum prices became supportive.

Rife with factionalism, road ahead is tough for Congress in Madhya Pradesh