The premiership of late prime minister Atal Bihari Vajpayee was the golden era for the economic growth and economic reforms in the country. His government pulled the country out of the hangover of socialism and pushed the country to embrace the global liberalization, privatization, and globalization of the 1990s. The economic reforms of his government were much more special because his coalition government had many political parties from the left side of the political spectrum like Biju Janata Dal (BJD), TMC, JD (U) etc. So what steps were taken by the Vajpayee government which compelled the ‘India Shining’ narrative?

The most important economic decision made by the Vajpayee government was perhaps The Fiscal Responsibility and Budget Management Act (FRBM) because it institutionalized the fiscal discipline to improve the microeconomic management of the country. The previous governments had become habitual of deficit spending in the election year for political gains out of it. The FRBM act ended this and compelled the governments to behave in a more fiscally prudent manner. Another path-breaking decision of the government was the New Telecom Policy which unleashed telecom revolution in India. Under the New Telecom policy, the regulation in telecom sector was separated from connection providing services. Two PSUs, BSNL and VSNL, were formed to look after the domestic and international telecommunication and the private sector was allowed to compete with them.  The government had a monopoly over the telecom sector and the mobile phone penetration was in single digit before the New Telecom Policy.

The Pradhan Mantri Gram Sadak Yojna which revolutionized the connectivity in rural India was the flagship program of Vajpayee government. Through this program, the villages across India got connected with towns and cities through all weather roads. The farmers were not getting a fair price for their products because they used to sell the crops to the local middleman at very low prices. The road connectivity enabled them to sell the produce in Mandi and get the fair price. The other flagship infrastructure program of the Vajpayee government was the Golden Quadrilateral. For the first time in the history of contemporary India, any government initiated such a large-scale infrastructure project to connect the four metropolitans in the south, north, west, and east India. So the Vajpayee government brought the people of India closer to each other and this was the second national integration program after accession under the leadership of Sardar Patel. The modern city infrastructure in the country was also started under the leadership of Vajpayee. His government funded India’s first modern metro rail project, the Delhi Metro Rail Corporation (DMRC) which is today the lifeline of the city and inspired the metro programs in many other cities of the country. 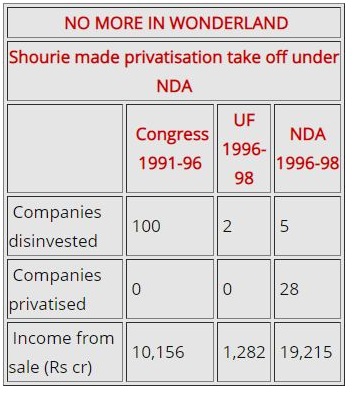 The Vajpayee government brought some fresh ideas to start the end of the socialist era and these were privatization and formation of independent regulatory authorities. The privatization of loss-making public sector undertakings was started by his government and to undertake this task Arun Shourie was made divestment minister. The NDA government privatized 28 companies and made 19, 215 crore rupees from this. Another big step was establishing the independent regulatory authorities to regulate the markets which were a relatively new concept in the country. Insurance Regulatory and Development Authority (IRDA), Competition Commission of India (CCI), Pension Fund Regulatory & Development Authority (PFRDA), Central Electricity Regulatory Commission (CERC) was constituted to regulate the respective sectors and keep them away from political and bureaucratic interference.

So, Atal Bihari Vajpayee played an important role in the national integration of the country through infrastructure projects and pulled the country out of the socialist hangover. The rise of the country on world stage started under his leadership, the seeds of Indic renaissance were sowed under his guidance.

A poet at heart, Atal Ji delivered some of the most memorable speeches