Urban consumers much better off after implementation of GST

According to an analysis by howindialives.com, urban consumers have to spend less money on goods and services in the post-GST period. Howindialives.com is a database and search engine for public data started by four business journalists- John Samuel Raja, Avinash Singh, Anand Krishnamoorthy and Ramnath NS.

The analysis is based on 71 items representative of a middle-class shopping cart and drawn from 18 categories of the Consumer Price Index (CPI), which measures changes in the price level of the market basket of consumer goods and services purchased by households. The market price data in different cities was collated from online grocer BigBasket.com. As per the analysis, the price at which the basket of goods is being sold has fallen across cities. Among the five big metros- Delhi, Mumbai, Kolkata, Chennai, and Bangalore, the sharpest decline in the prices has been in Bangalore. 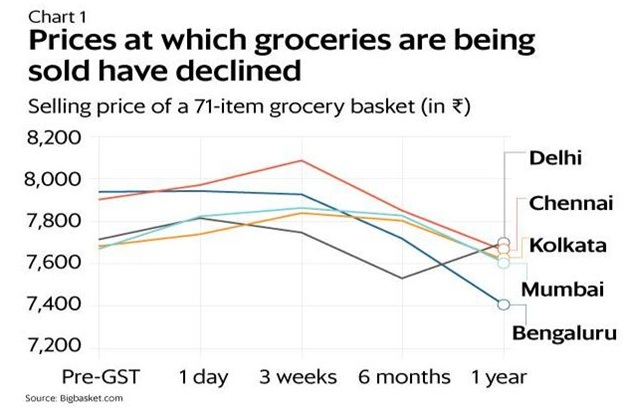 The fall in prices is due to discounts offered to urban consumers by retailers as the maximum retail prices (MRP) charged by companies is same. The fall in the prices has been in line with the discounts offered across cities because the MRP is almost the same across the cities. 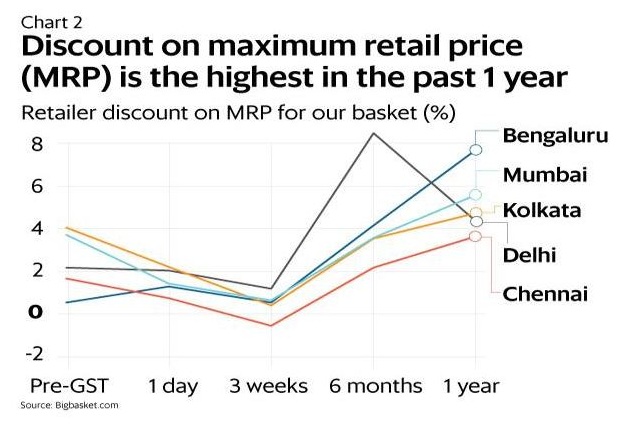 However, the markup charged by companies varies across cities and time frames, leading to urban consumers paying different amounts for the same product in different cities and at different points in time. Markup is the amount added to the cost price of goods to cover overheads and profit. The markup of our basket as a share of MRP is the same for three cities and has increased for two cities. Bangalore recorded the highest increase, from 6% to 11%. The increase in markup in the post-GST period is highest in the cities where it was less in pre-GST period, because the shopkeepers are trying to earn more profit due to a fall in the prices. The increase in markup is the highest in spices (5% to 21%), followed by non-alcoholic beverages (7% to 15%) and personal care (8% to 12%). Cereals (9% to 6%) and household goods (7% to 4%) saw a decrease in the markup. The MRP had increased in the initial six months of GST implementation because many shopkeepers were not passing down the benefits of the fall in prices to the consumers. Some companies were punished by government regulatory bodies for that and thereafter in the next six months the MRP came to almost pre-GST levels.

The GST was expected to be disruptive and harmful to the Indian economy in a short run of one or two years. But it proved to be less disruptive than was expected by the Modi government. GST proved very influential in widening the tax base of India, and helped to increase the indirect as well as direct tax revenues of the country.  The number of direct taxpayers increased from 6 million to 10.6 million in the fiscal year 2017-18 which is a positive spillover effect of the GST. According to experts, there will be some positive and some negative spillover effects of GST in coming years. GST is going to be as influential as the liberalization of the economy in 1991.

As NYPD officer gets caught spying, US may shut the Chinese consulate in New York too after Houston