With proposed Hyperloop between Mumbai and Pune, Fadnavis looks to project Maharashtra into the future

Maharashtra Chief Minister Devendra Fadnavis is one of the youngest politicians in the country and represents the aspirations of young India. He visited ‘Virgin Hyperloop One’ test site to explore the possibilities of implementing the Hyperloop technology for transport between Mumbai and Pune. The CM held a meeting with Virgin Hyperloop One CEO and board member Rob Lloyd in Nevada, USA. If implemented, the Hyperloop project will reduce the travel time between Mumbai and Pune from four hours to 25 minutes, covering the distance of 200km between the two cities.

The idea for Hyperloop transportation in India was expressed by Virgin Group chairman Richard Branson in Magnetic Maharashtra Summit in Mumbai in February. Richard Branson is one of the investors in the company ‘Virgin Hyperloop One’ which is will implement the project. According to a statement released by the CM office, “The Government of Maharashtra is exploring this transportation technology (Hyperloop) for the Mumbai-Pune route with an aim to reduce the travel time between them to just 25 minutes. Virgin Hyperloop One will soon be sending its engineers to Pune to conduct a study, The Pune Metropolitan Regional Development Authority (PMRDA) has identified a 15-km long demonstration track for Hyperloop. If things go as per plan then the Hyperloop between Mumbai-Pune will be ready by 2024.”

The government claims that 70 percent of the raw material and components required will be bought from Maharashtra itself. This project will give a boost to “Make in Maharashtra“, with the estimated investment in the project being around 200 million dollars. Some other states like Tamil Nadu, Andhra Pradesh, Karnataka, Telangana are also exploring the possibilities to connect the major cities of South India. Hyperloop is high-speed travel in tubes where a pod-like vehicle travels through a tube at a speed which is more than the usual airline speed. Its first open source design was released by a joint team of Tesla and SpaceX. 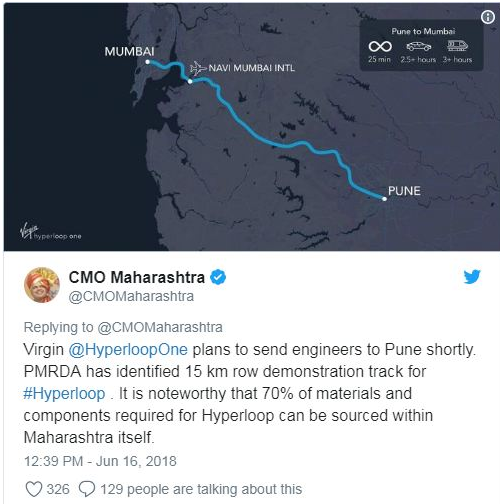 The hyperloop technology is expected to revolutionize the transportation system in the upcoming decades. It is as fast as air travel if not more, and very environment-friendly. The project will lead to drastic reduction in greenhouse gas emission up to 1.5 lakh tonne annually. The Mumbai-Pune route is one of the busiest routes in the country, where road and air traffic is very high despite good connectivity. As of now the major players in Hyperloop technology are Hyperloop One led by Vodafone fame billionaire investor Richard Branson and CEO of Tesla Elon Musk. Richard Branson is known for revolutionizing wireless telephone technology, while Elon Musk is a serial entrepreneur transforming one industry after another like digital payment and Electric Cars. Two of the smartest brains of the world working investing heavily in hyperloop technology show the feasibility of this revolutionary transportation idea.

Since coming to power, CM Fadnavis has proposed many out of the box solutions to several arching problems of the state. For example, his Jalyukta Shivar Scheme is solving the decades-old problem of drought in the state. According to state government data, within four months of this summer, only 152 tankers of water were needed in 12,000 villages that became water reliant. The tankers required in the area are declining slowly, as in 2011, 379 tankers were needed while the number came down to 366 in 2017. The ‘ Make in Maharashtra’ initiative led to billions of dollars invested in the state from major companies like Foxconn, Virgin group etc. The work on Mumbai Metro is going on in full speed on the western line and central line, as Fadnavis looks to modernize Maharashtra and project it into the future.