No Result
View All Result
Newswire
From super spreader to Superman: 5 wild moments from Trump’s 2020 (Analysis) 1 hour ago
How Pedro Pascal prepared for ‘The Mandalorian’ 1 hour ago
Coyote Ugly might get a reboot 3 hours ago
Bihar phase 2 polls: 502 candidates face criminal charges 3 hours ago
Disappointed with collapse of Nagorno-Karabakh ceasefire: Trump 3 hours ago
Russian FM self-isolating after coronavirus patient contact 4 hours ago
Next
Prev

It is not about Vijaya Dashmi Anymore, Kolkata HC has Given the Case a New Angle. And Mamata is left Angry and Embarrassed

When we were kids, we learned an idiom that became one of the major lessons of life. The idiom was- “Where there is a will, there is a way”. This is one of the basic lessons that a kid receives during his/her journey to adulthood. This inspires him/her to never step back from achieving what he desires. However, it seems that the Mamata Banerjee-led West Bengal government forgot this basic idea. Hence, the High Court had to remind the Chief Minister about the lesson by drawing a comparison between the West Bengal Police and the Maharashtra Police.

It all started in 2015 when Mamata Banerjee put a temporary halt on Durga idol immersion from 22nd to 24th October due to Muharram. The reason stated by her was “precaution to avoid communal clashes”. She firmly believed that communal clashes can happen when two communities carry out their rituals and festivals on the same day. She continued the same trend in 2016 by again putting a “temporary halt” on idol immersion from 4 P.M. on 11th October because Muharram was on 12th October. That year, the High Court Justice Dipankar Dutta lifted the “restriction on idol immersion” by directly calling such directive “appeasement politics”. But, Mamata being Mamata, did not learn anything from the verdict and again continued with the same old “temporary restriction” on idol immersion this year. On 23rd August 2017, Mamata Banerjee declared a temporary restriction on Durga idol immersion from 6 P.M. on Vijaya Dashami (Sep 30th) to 6 A.M. October 2nd this year.

On September 15th, a division bench comprising Acting Chief Justice Nishita Mhatre and Justice T Chakraborty wanted to know whether idol immersion can be continued after 10 PM till 1.30 AM on October 1st. The court directed the state counsel to inform it about the government’s views on September 18th. The judges also wanted to know how many Muharram processions had been allowed. The government counsel informed the HC that only two organizers had sought permission for Taazia procession.

The division bench was surprised to hear that the entire Durga puja immersion ceremony was either being cut short or postponed because of only two Taazia processions.

Mamata Banerjee, when questioned about the inefficiency of the Bengal Police, became angry due to the remarks passed by the judges.

The next thing she did was to lash out at BJP by claiming that the so-called communal party is spreading rumours to instigate communal hatred in her state. She accused BJP of misleading the common people by confusing them about the directive, which is otherwise, an efficient procedure to promote the Ganga-Jamuna Tehzeeb (communal harmony).

Earlier, Mamata had a tendency of calling everybody a Maoist if he/she disagrees with the Chief Minister’s views. During a public talk-show, she even called a girl in the audience a Maoist for questioning her regarding the Law and Order of the state. Now, whoever disagrees with her or criticizes her, she calls him/her a BJP agent. Just like Arvind Kejriwal called the LG a BJP-agent, Mamata Banerjee called the Governor Mr. Keshari Nath Tripathi a BJP-agent when he questioned the Law and Order of the state due to the frequent communal clashes like Malda, Kaliachowk, Dhulagarh and Basirhat.

Though there is no reason to think the High Court judges are also acting like BJP-agents, still Mamata Banerjee is quick to find out BJP’s conspiracy in this verdict too.

In reality, the misrule by Mamata Banerjee’s government has turned the West Bengal Police department into a gang of puppet and sycophants.

It all started in 2013 when Mamata Banerjee publicly abused a sergeant of the special branch for making her wait for her car in Kolkata Bookfair 2013. She showed her short temper by saying that she would whip the sergeant who was just carrying out his duty sincerely. Such attitude by the CM is enough to dampen the image of Police department in front of her party workers who do not respect the Police department.

Since that day, the West Bengal Police department saw immense downfall of its stature in a state where Police hides under the table being afraid of the goons of the ruling party. In November 2014, the goons of the ruling Trinamool Congress (TMC) ransacked a police station in Alipore area of Kolkata in the name of protesting forced acquisition of a public works department (PWD) land. The Police hid inside almirah and under the table to save themselves, instead of taking action against the miscreants. 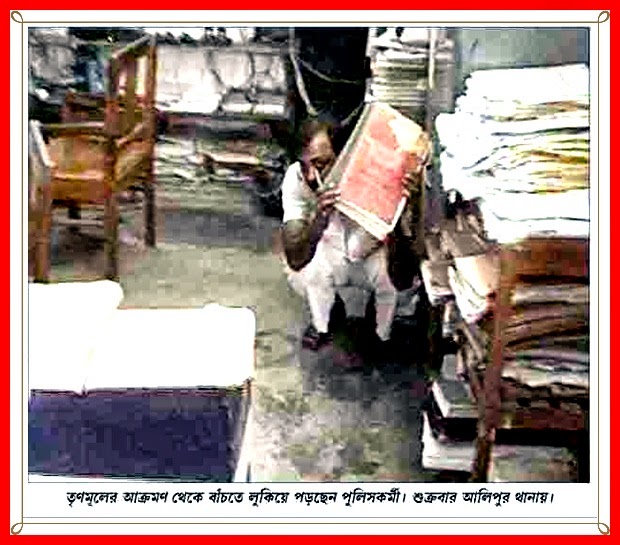 Another incident that proves the weakness of the West Bengal Police department is the burning of a police station in Malda during the Kaliachowk riots. In January 2016, a violent mob rampaged through the streets and burned down numerous vehicles, BSF vans and a police station in Malda when a riot took place as a protest against the comments passed by Kamlesh Tiwari. Numerous records, which were evidences of drug business in Malda, turned into ashes in front of the worthless Bengal Police who were busy in saving their skins instead of teaching the miscreants a lesson.

In December 2016, a riot broke out at Dhulagarh, which is at 20 minutes distance (approx. 17 km) from the state secretariat Nabanna. Instead of saving the victims from the rioters, the Bhadrolok Bengal Police gave 2 minutes to the victims to flee from the scene. The brave Bengal Police fled from the scene leaving the victims at the mercy of the rioters. When Zee News media personnel tried to cover the news, the editor Sudhir Chaudhry, correspondent Pooja Mehta and camera-man Tanmay Mukherjee were charged under Section 153A. That was an efficient way to propagate communal harmony- by shielding the rioters.

On 16th October 2016, a youth named Indrajeet Dutta was murdered when an argument took place regarding the money collected for Muharram celebration. The family of Indrajeet Dutta has not received justice till now and his murderers are roaming freely. On 27th March 2017, some youth collected Rs. 51,000 and went to Indrajeet Dutta’s home to give the money to his family. These youths were arrested by the Rampurhat Police for wearing saffron T-shirts with Jai Sree Ram written on them. The news was not published in any English media, but a local Bengali media published the news. Three of these youths were Sabyasachi Bhattacharya, Ankan Dutta and Moon Bittar who are very much active on Facebook. 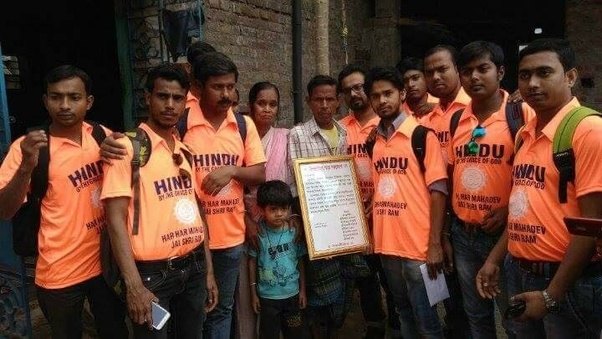 The recent incident was the Basirhat riot where the Bengal Police arrested a minor and kept him in Basirhat sub-jail for posting a Facebook post which allegedly instigated a riot. The efficient Bengal Police could not arrest the rioters, but were energetic in mentioning the minor an “18+ years old adult” and detaining him in a sub-jail- which is against the law.

Another feather in the cap of efficiency of West Bengal Police Department was the beating of Tehatta school students, including girls, who were rallying on National Highway 6 and demanding their school to be reopened so that they could celebrate Saraswati Puja. The Police failed to arrest the fundamentalists who were instigating communal tension by demanding to permission to allow them to celebrate Nabi-Diwas in the school premise, and forced to close the school when their demands were not fulfilled.

There are numerous incidents, which showed that West Bengal Police is turning into a worthless department, knows nothing except taking salary at the exchequers expense and extorting money from the truck drivers. They cannot even tackle the Syndicate Mafia in West Bengal unless gets a nod from the politicians.

To end the discussion with, here is a question. Don’t you think Mamata Banerjee has enough reason to fume over HC’s remarks especially when her inefficient Police Department, which cannot save riot victims and cannot arrest rioters, is asked to perform like one of the most talented Police Department in India?

It was a Prosperous Country, Now Its people are Forced to Eat Rabbits. That’s What Socialism Does to a Country

Indian Army is Pitting Terrorists against Terrorists in Kashmir. And the Result is Deliciously Awesome