by Rajat Narsapur
in Analysis
0

At the stroke of midnight on 1st July last year, India witnessed a major economic tax reform in the Central Hall of the Parliament. On that very day, Prime Minister Narendra Modi had termed GST simply as “Good and Simple Tax”. Instead, Congress President Rahul Gandhi while speaking at a rally in Gandhinagar, chose to call it as “Gabbar Singh Tax”, before the Gujarat Assembly Elections. Many intellectuals also chose to claim that the BJP shall lose in the Gujarat elections due to decisions like ‘Demonetization’ and the ‘GST’ implementation. The Gujarat election results were a perfect reply to such comments on one end, but stretching on to actuality, the facts and figures showed up themselves impeccably in support of the GST.

The GST collections crossed Rupees 1 lakh crore in the month of April this year which was a huge achievement for the Modi government. The Rating agency ICRA also praised the Modi government for an appreciable implementation of the tax reform in the goods transportation sector.

The Finance Minister Shri Arun Jaitley had addressed a lot of issues regarding GST which had been put up by the industrial stakeholders back in September 2017. Gems and Jewellery Export Promotion Council chairman Praveenshankar Pandya said, “We got a positive response from the minister. They would tabulate our demands to put that before the GST Council”.

All these substantiate to the systematized decisions that were taken by the government to yield better outcomes this year from the industrial sector. The FMCG (Fast moving consumer goods) companies have recorded a double digit growth in their sales volumes, of which the FMCG giant HUL (Hindustan Unilever Limited) has reported a growth of 19% in its June quarter.

The voice of GST being a bumper bonus in the sales for the FMCG companies was being heard in the economic experts’ strata as soon as GST marked its 1st anniversary on the 1st of July, 2018. All analysts expected a high-single to double digit growth in the FMCG (Fast moving consumer goods) sector in the April-June quarter of this year. IDFC Securities said, “In terms of input costs, prices of crude and crude-linked commodities will continue to inch up, which could impact gross margins in the sector sequentially.”

Hindustan Unilever, India’s biggest consumer goods company, had reported a 9.3% YoY rise in net profit to Rs 1,283 crore for the first quarter that ended in June 2017. While this year in June, HUL recorded a growth of 19% with the net profit rising to Rs. 1,529 crore. It saw sales volume grow 12% while the total income rose 3% in the quarter to Rs. 9,622 crore. HUL’s earnings before interest, tax, depreciation and amortization rose 21% to Rs. 2,251 crore while operating margin expanded to 23.7% from 21.9% last year.

Sanjiv Mehta, Chairman and Managing Director, HUL commented: “We have delivered another strong performance in the quarter, with double digit volume growth across all three divisions and further improvement in margins. This quarter also saw the integration of Foods and Refreshment divisions which will help us increase organizational agility and better serve local consumers while harnessing the advantages of global scale.”

According to many industrial giants and economists, GST has proven to be a money saving equipment for the common man increasing his/her financial stability. The day-to-day goods including cookies, soaps, shampoos, hair oils etc. are being taxed at 18% under the GST in comparison to the 22% extra burden on the common man in the case of indirect taxes (Excise duty and VAT). Around 200 products like detergents and skin-care products that attracted 28% of indirect taxes, have now been bucketed into the 18% slab of the GST. “In the months since the roll-out of GST we have seen consumer confidence improve, which has resulted in higher growth, with consumer demand shifting from unorganised players to organised players,” said Dabur India chief financial officer Lalit Malik. Appreciating the GST for assisting the FMCG companies in their growth, Krishnan Sambamoorthy and Vishal Punmiya of Motilal Oswal in a recent report wrote, “The consumption pattern is likely to get even better in FY19, with manufacturers passing on the price benefits to consumers post GST and GST 2.0”.

Not only this, HUL published an advertisement in The Times Of India newspaper on the front page in December 2017 displaying “Thank You, GST” in the headline. The advertisement also showed the prices of various day to day products whose prices fell post implementation of the GST. 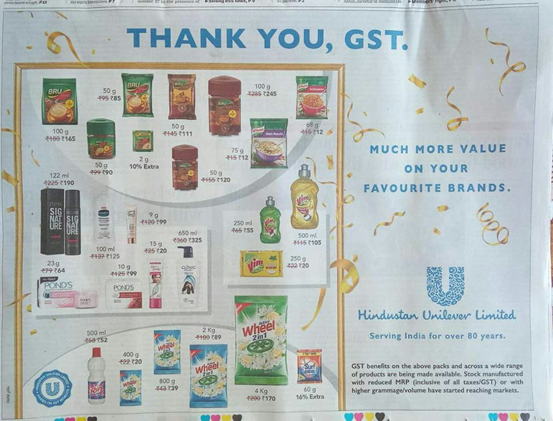 All these endorsements by the industry giants are a full proof explanation on how the government has stood up to the industry expectations in policy-making.

The most important point to be noted here is that, with all these good news coming from the FMCG sector, the government has an answer to many opposition parties claiming that the government has done nothing for the common man. Going a bit further, the above figures are a proper riposte to the demand of a single slab in GST by the Congress party. On the 1st anniversary of the GST, the former Finance Minister P. Chidambaram went on to say that the GST has become a ‘bad word’ among the business persons and common citizens. It is time for Mr. Chidambaram and his party to come out of the unholy nexus of defaming PM Modi and his government because the facts and figures speak for themselves. The Congress party, while citing the reasons for moving the motion of no-confidence, also mentioned GST as a major issue.

Spiritually observing, the Modi government has received the blessings of the Wahe Guru as it chose to add Langars in the 0% GST bracket. The idea of good governance exhibited by the ones in power is a visionary help for the country and the common citizen. The GST has brought in many changes and many experts believe that India shall progress in a better manner with the current statistics in hand.