Whose Healthcare? The Nation’s or the Mahagathbandhan’s?

Many from the medical fraternity were surprised to receive an invite for the‘National Conclave on Healthcare’ which was being organised by Samruddha Bharat Foundation on Sunday, July 29, 2018 at the Constitutional Club of India in the heart of the capital. The surprise was warranted since the eminent speaker at a conclave on healthcare, was not a doctor, not a scientist, not anyone with experience in formulating policies regarding health, but a 3 time MP from Uttar Pradesh, Shri Rahul Gandhi, with no achievements whatsoever to his name other than being the son of a Prime Minister, grandson of another and great grandson of a third. 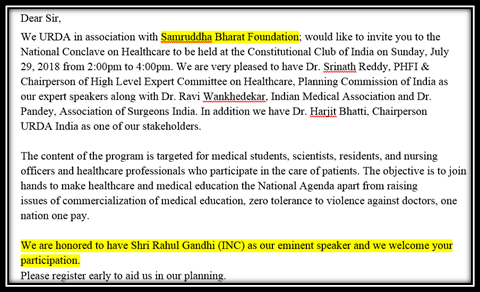 The surprise turned into shock when one reached the final page of the invite which listed the program’s schedule: 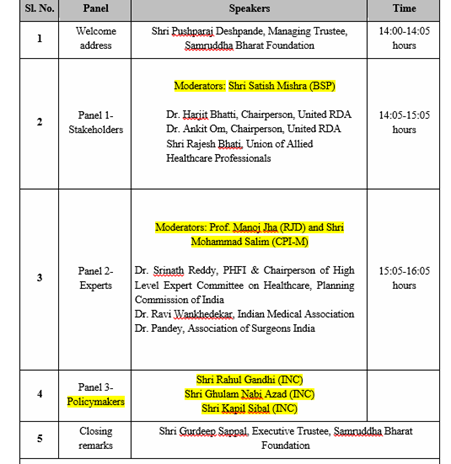 In this conclave on healthcare, almost half of the speakers are from political parties, and not any random political parties at that- Congress, BSP, RJD and CPIM and not even one amongst them was a doctor or related to the health profession.

Once one visits the website of the parent organisation, Samruddha Bharat Foundation, things start becoming clearer. It states that it is an independent platform of progressive individuals striving to counter the attacks on the Constitutional idea of India. So far, so good. Click on the ‘Advisors’ tab, and lo and behold, 4 out of the 5 names (including that of Mr. Priyank Kharge), are associated directly or indirectly with one political party- the Indian National Congress.

While it is all right for political parties to indulge in politics, hell, that is what they are supposed to do, the question is fair and square at the doorsteps of the medical fraternity and its representatives from associations like the Indian Medical Association (IMA) and United RDA (URDA) whether they wish to be puppets in the hands of shrewd politicians?

The medical profession is a much respected profession in the eyes of the common man and many consider doctors to be next to God. So in this light, is it ethical for representatives of the medical fraternity to flirt with such openly partisan forums? What else but petty politics, can be the rationale behind having moderators from parties who excel in scams in the name of health (remember the NRHM Scam) and who could not build a decent hospital in the fifteen years that they ruled (or ruined) a state and now have to run to Delhi and Mumbai for treatment of their own Chief? The invite in itself is a scathing indictment of the way healthcare has been handled for the past 70 years in India and yet the organisers have chosen to invite 3 politicians from the very party that is chiefly responsible for this mess!

If the conclave was serious about wanting to do transform the health system in the nation, would it not have been better to have representatives from the health ministry or NITI Aayog? If they were so keen to have politicians over, would it not have been more prudent to invite Dr.Harshavardhan or Dr.Jitendra Singh who are qualified doctors? Pranab da, one of the tallest leaders of the Congress party, himself set an example as to how important it is to engage even with voices one does not necessarily agree with. But excluding any representation from a party which is in power not only at the Centre but also across most of India and choosing to focus on politicians with a set agenda, makes one believe that rather than the health care of the nation, such conclaves are more focused on ameliorating the flailing electoral health of certain parties.

Whatever is said at the conclave tomorrow is secondary. A noble profession like medicine and healthcare, risks losing the credibility and trust it enjoys by the mere virtue of appearing hands in gloves with such partisan platforms. Now it is for the larger fraternity to introspect about whether or not it approves of the action of some who claim to be its representatives………