The National Health Protection Scheme (NHPS) will offer treatments at 20 percent lower rates than the Central Government Health Scheme (CGHS) and Rashtriya Swasthaya Bima Yojana (RSBY) under what is touted as the famed Modicare. CGHS is the existing medical care scheme for central government employees started in 1954 under Ministry of Health and Family Welfare, while RSBY was started in 2008 by the Manmohan Singh government to provide health insurance coverage to people living Below Poverty Line (BPL).

The new health insurance scheme, popularly known as Modicare, was announced by the Modi government in Union Budget 2018. The combined schemed known as Ayushman Bharat– National Health Protection Mission (NHPM) is being hailed as the largest public sector health cover in the world. It will subsume RSBY and provide 5 lakh health insurance cover to 50 crore people, which is nearly 40 percent of the population of the country. The families which will benefit from the scheme will be identified from Socio-economic and caste (SECC), 2011 data. An official from health ministry said “The ministry has finalized the rates for 1,354 packages, which will be covered under NHPS.

The packages include 23 specialties such as cardiology, ophthalmology, orthopedics, urology, and oncology, etc.” The scheme has brought prices of many treatments to as much as 50 percent lower, for example, a knee replacement costs 3.5 lakhs in an average private hospital while under NHPS the price will be 80,000 for the same.The private hospitals used to charge rates according to their own wishes to people but under this new scheme, the rate of common procedures has been fixed. Indu Bhushan, chief executive of Ayushman Bharat said “CGHS and Rashtriya Swasthya Bima Yojana (RSBY) rates have been used as reference prices for fixing the rates under the Modicare scheme. However,the rates under the new scheme are on an average 15-20% lower than that of CGHS.” 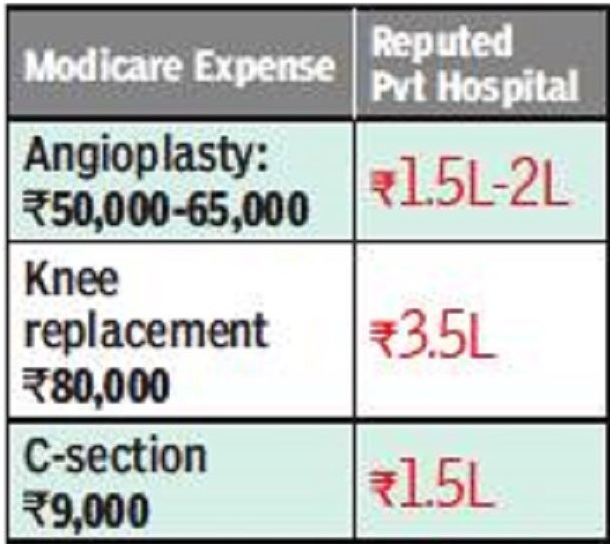 The people will be treated in private hospitals under this new scheme but the government will provide money for treatment from the 5 lakh health insurance covers which 10 crore needy families will be availing. Besides the insurance cover, the government will create 1, 50,000 wellness centers across the country. The wellness centers which includes Sub-centres, Primary Health Centres (PHC) and Community health centers (CHC) are the first line of contact for primary health care for the citizens of the country. 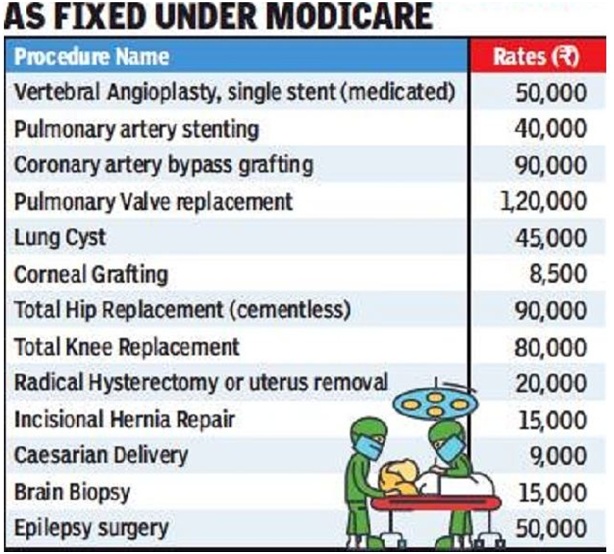 According to the draft of National Health Policy, “Over 63 million persons are faced with poverty every year due to healthcare costs alone. It is because there is no financial protection for the vast majority of healthcare needs.” The poor and needy have to sell their assets like jewelry in order to get quality healthcare, or land up borrowing money from Sahukars who levy heavy interests. The share of non regular expenditure on healthcare as a proportion of total household monthly per capita expenditure is 6.9 percent in rural areas and 5.5 percent in urban areas.

The new Modicare policy by the government will create a competitive environment in the market to provide cheap and better healthcare in the country. Modicare will be able to provide healthcare to the last man of the country which will be the realization of “Antyodaya” dream of BJP ideologue Pt Deen Dayal Upadhyay.