Congress Manifesto: A package of scams and horrors in waiting

27th April has its own irony. This date will be remembered twice. Once, for the epic dismissal of Navjot Singh Sidhu at Sharjah in 1990, when he got clean bowled by Waqar Younis on the first ball, a fact for which he is trolled even today, courtesy the once great comedian Kapil Sharma.

The other incident is the release of a manifesto by a political party, which proves how shamelessly lying on the face can also be an art. Moments after Rahul Gandhi dug his own political grave by insulting the song ‘Vande Mataram’, the Congress party released their manifesto for the upcoming Karnataka elections 2018.

Needless to say, anything that is released with the blessings of “BJP’s star campaigner” wouldn’t be anything less than hilarious. So is the manifesto, which is more of a book on how to make castles in thin air than an actual summary of what Congress would give to Karnataka, should they be re-elected again. Before delving into how this manifesto was termed the ‘Congress Manifesto Scam’ on social media and royally ripped apart, let’s have a look at some of their super tall claims:-

Jobs to be offered to the kiths and kin of the martyrs!:-

The manifesto claims of giving more jobs to the kins of martyrs, whereas the Congress has done nothing but insult martyrs’ legacies, from refusing to provide jobs for the kin of Lance Naik Hanumanthappa, demolishing the boundary wall of Lt.Col. Niranjan Upadhyay’s home, who died in the Pathankot attacks, to refusing to give a state funeral to legendary war hero Colonel M B Ravindranathan of the Rajputana Rifles, who had led the Indian soldiers to a historic win at Tololing in the 1999 Kargil War. Nothing could be more ironic than this.

IT sector to contribute USD 300 billion in next 5 years!:-

According to the manifesto, the Congress plans to increase the contribution of the IT sector to the GDP from the present figure of $60 billion to a whopping $ 300 billion by 2023. Ironically, the actual GDP of Karnataka doesn’t go beyond $190 billion. Can the Congress committee explain how will they make this possible, that just the income from IT would be more than the state’s collective GDP? 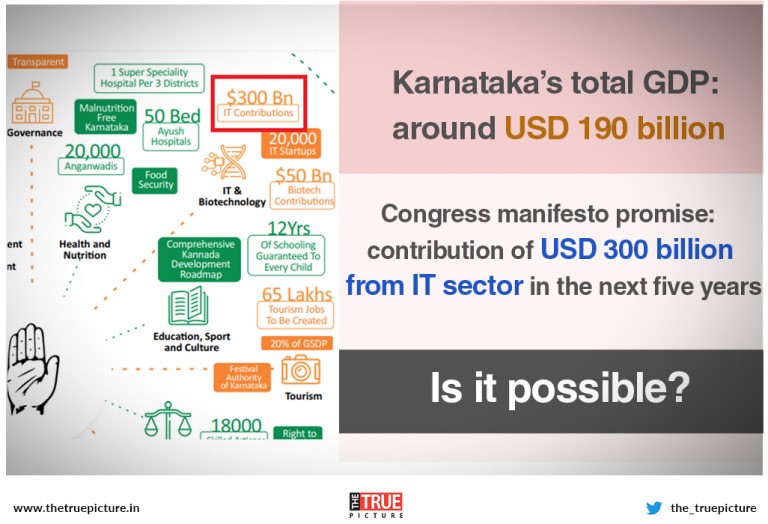 Creation of more than 14 lakh jobs?

Congress has claimed in its manifesto that more than 50 lakh jobs have been provided in the entire term to the millions of Karnataka residents. But before we go gaga over it, let’s have a look at this:-

Also, Rahul Gandhi has consistently harped on the point that there has been zero job creation in India since the ascent of PM Modi to power. So who is lying? The manifesto or the Minister in the screenshot? Or simply, our dear Rahul Gandhi? 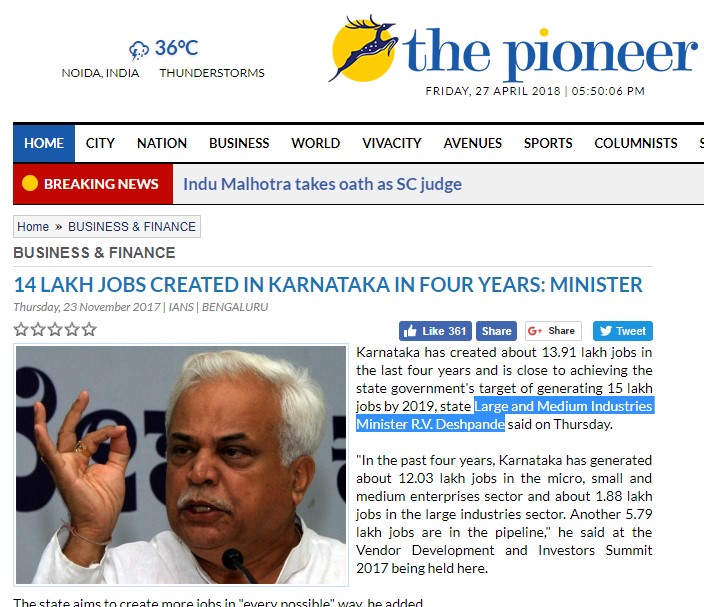 In their manifesto, Congress has promised for an expansion in the skill development of the state, with the following promises:-

However, if one looks closely, they’ll also find that Congress has promised the availability of cooking gas, and yes, AS A SKILL!  Expect the Congress party to come up with such out of the box promises!

Appeasement Politics on a High:-

Congress is in full appeasement mode. They’ve shed the cloak of passive Hindutva, which they tried to use to achieve success in Gujarat elections, and are leaving no stone unturned to give a green card to the very poison of radicalism, which has made the states of Bengal and Kerala a living hell. Following tweets by BJP Karnataka show how serious this issue is:- 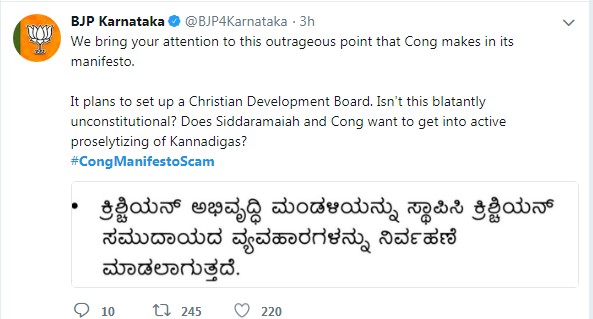 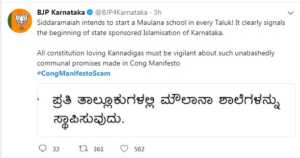 Without wasting any time, everyone roasted Congress for their absurd claims in the manifesto, and royally trolled the Congress top brass left, right and center. Led by B.S. Yedyurappa, the CM candidate from BJP, here are some of the best retorts to the absurd manifesto:-

However, the best one came up from BJP MP and Minister of State for Micro, Medium and Small Enterprises, Shri Giriraj Singh. Famous for his savage comebacks, he paraphrased Rahul Gandhi’s hilarious promise in Gujarat elections like this:-

To be frank, this is probably the best example of how mentally bankrupt the Grand Old Party has now become. Just to stay relevant, they are not hesitating in even shamelessly lying, even if it means putting the security and the integrity of the state or the nation on peril. We won’t be surprised if the denizens of Karnataka jokingly give a landslide victory to BJP.

But there is another way of looking at the manifesto. And that is from a purely fun perspective. Politicians lie all the time, bragging is an essential weapon of their arsenal, but this manifesto is a pioneering oeuvre of fabrications. It’s so god awfully bad, that it begins to amuse you and therein lies its exquisiteness. It’s an exceptional manifesto if you have a sense of humor. The political opponents of the congress party who began trashing the manifesto the moment it was released, probably lack that.

The cabal’s lies and hysteria over “Shajahan’s Lal Quila” exposed.