Assam Congress MLAs have a problem with Priyanka Chopra’s ‘Cleavage’

Before moving to the Assam Assembly, let’s wind our clocks to roughly one year back. PM Modi was in Berlin, Priyanka Chopra who was coincidentally there expressed her desire to meet the PM and a formal meeting was set up. The immaculate dresser that PM Modi is, he showed up in a black formal Bandh Gala suit, Priyanka Chopra however decided to show up in a casual white knee length floral dress.

This led to a mini war on Social Media. Few ‘trolls’ made a big issue about the length of Priyanka Chopra’s length. Some of the more reasonable ones said that Priyanka could have chosen a slightly more formal attire, as she was meeting the Prime Minister of the biggest democracy in the world. Social Media feminists declared a war on trolls and media was quick to pick it up. Priyanka Chopra’s skirt became the biggest talking point of the week. News debates were organized in media rooms packed to the brim with experts of all kinds. Right wingers are inherently against the freedom of woman was the final take away of the discussions. And that the right-wing trolls have been emboldened and empowered in the Narendra Modi regime was a related inference. Things, then went back to normal.

Priyanka Chopra’s “bold dress” is back in news. No, we aren’t talking about her steamy scenes in American TV Series ‘Quantico’, but about this picture: 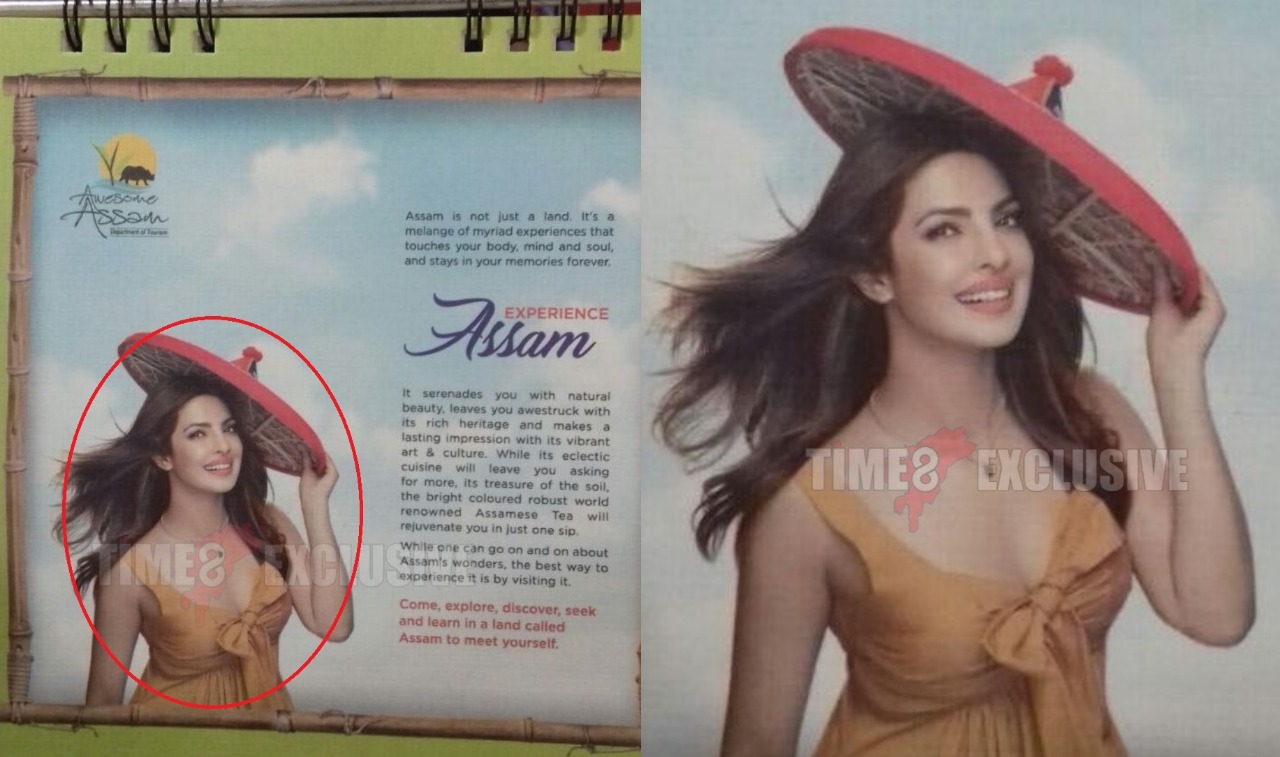 Without expressing our opinion about this picture, we’ll simply quote what some Congress Ministers had to say about it. During the Assembly session, members of the Congress party – Rupjyoti Kurmi (MLA from Mariani), Roseline Tirkey (MLA from Sarupathar), and Nandita Das (MLA from Boko) – demanded the removal of Priyanka Chopra as the brand ambassador of Assam, claiming that the pictures of her in ‘minimal clothes’ have sullied the culture of the state.

A report from North East news portal TIME8 quotes Rupjyoti Kurmi as saying “The government should preserve the respect of the Assamese society. Frock is not an Assamese attire and the calendar pictures were not sober at all. The government should have known how to preserve the prestige of the Assamese society, instead they could have used the traditional mekhela chador. This is the reason we have protested against the calendar,”

However, Jayanta Malla Baruah, chairman of the Assam Tourism Development Corporation, said that there is nothing objectionable about the Priyanka Chopra’s pictures in the calendar.

Taking a dig at the enraged Congress MLAs, Baruah said that Congress members probably wanted them to use Priyanka Gandhi on the calendar, instead of Priyanka Chopra. He further added that the calendar was made to promote Assam internationally. It has also been sent to prominent international tour operators and dignitaries.

It must be noted that Priyanka Chopra was appointed as brand ambassador for Assam in 2016. The state actively uses Cinema as a key element of the state’s tourism promotion strategy.

Coming back to the original topic. It is remarkable that the liberal and feminist media that readily gets offended is almost cool with the remarks made by the Congress MLAs. The media that projects the comments by some jobless trolls as the opinion of the right wing and the silent support of the Hindu Nationalist government chooses to go into hibernation when the ‘trolling’ is done from the other side of the fence. And for a change there are no trolls this time, but elected legislators in a state assembly.

What would have been the decibel levels, had some BJP MLA made the same comment? Well, it’s anybody’s guess!