Lot of Pressure on Modi Government to keep Rohingya Muslims in India, But the Government Surprised the Liberals with its Action

After the fall of Sassanid Empire to the blade of the bloodthirsty soldiers of the invading army, history witnessed brutal persecution of the Zoroastrians. Between the 8th and 10th CE, few fortunate Zoroastrians escaped the genocide and reached the kingdom of Sanjan which was ruled by the benevolent king Vijyaditya. When the Zoroastrians sought asylum, the king showed them a vessel of milk filled to the brim- signifying that his kingdom is already filled and could not accept refugees. A Zoroastrian priest took a handful of sugar and added into the milk, suggesting that they would stay like sugar in the Milk, and will add to the sweetness of the milk. The king gave them shelter and the Parsis became an important part of India’s cultural ethos, coexisting with the rest of the population peacefully. India still follows the path of Vijyaditya aka Jadi Rana by providing shelter to refugees who seek asylum- be it the Tibetan monks, or Bangladeshi refugees, or Sri Lankan immigrants fleeing from the fire of civil war, Afghans, etc.

The country which itself was torn into three pieces based on the lines of religion, provides asylum to every refugee irrespective of his/her religion. However, the tradition of granting asylum must never supersede national security- a philosophy, which Jadi Rana maintained. India is thus cautious about Rohingya Refugees because other refugee groups that came to India, Rohingyas have proven links with terror factions. Rohingya insurgent groups like Arakan Rohingya Salvation Army (ARSA), Arakan Rohingya Nationalist Organization (ARNO), Rohingya Solidarity Organization (RSO), etc. have active links with many global terrorist groups including the Al Qaeda, Taliban, LeT, JeM and even the Hijbul Mujahidin of Kashmir. In 2002, a video surfaced which showed a group of Rohingya Muslims receiving training in Taliban camps in Afghanistan. Recently, Indian security agencies like NIA and NSA have made some serious discoveries, which reveal that Rohingya Muslims can be a potential threat. 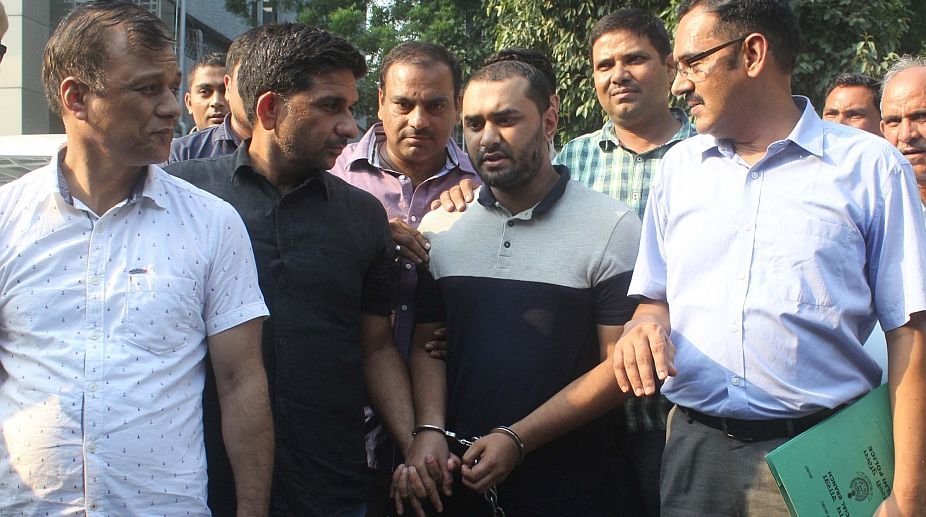 The most recent news revealed the links of Rohingyas with the ISIS. The intelligence branch of Nagaland Police had warned the authorities about a possible attack by the Rohingyas who live in the state. The Nagaland Police reported that an Imam of Dimapur has been urging the Rohingya Muslims to take up arms against the Nagas if the latter try to drive them out from the region. The Imam had commenced collecting arms, ammunitions and money from Bangladesh to start a jihad movement in Nagaland. 20 ISIS militants have entered the state and are training the militants. According to the BSF General VK Gaur, militants of JuD, LeT, Al Qaeda, Jammat-e-Islami, Chhatra Shibir, etc. have infiltrated the Rohingya Refugee camps by disguising themselves as relief workers distributing reliefs from Muslim Countries. The young refugees are lured to join the jihad movement. Many people in the group are pro-Pakistani and are against the Indo-Bangladesh amity.

The Rohingya-ISIS link is not a new one. In 2015, Singaporean prime minister Lee Hsien Loong referred to a unit called Katibah Nusantara which was recruiting Indonesian and Malaysian Muslims to fight for ISIS in Syria. This group posted messages online to recruit Rohingya Muslims to fight for jihad. In September 2017, Malaysian counter-terrorism chief Ayob Khan Mydin Pitchay said that ISIS is exploiting the Rohingya crisis to recruit more fighters, particularly from South-east Asia. In Indonesia, the Islamic Defenders Front (FPI) had exhorted “jihadists” to travel to Rakhine to fight on behalf of the Rohingya. It is believed that with ISIS losing its stronghold in the Middle-East, the group is trying to expand its territory in South-East Asia.

Though the Rohingya-sympathizers claim that Rohingyas took up arms to defend themselves, the nature of Rohingya movement is simply motivated by the eternal aim of Islamic expansion. The 2012 Rakhine riot took place when the Rohingya Muslims gang raped and killed a Rakhine Buddhist woman and burned 12 Buddhist monks alive. This started the worst military-crackdown against the jihadists. Though some secular humanitarians claim that Myanmar’s army persecuted both the Rohingya Hindus and the Rohingya Muslims alike, a recent report showed a different story. A mass grave of 28 Hindus was discovered in the village of Ye Baw Kya. The corpses included 20 dead women, 2 men and 6 children under the age of 10. The Hindus were brutally killed by the Rohingya terrorists of ARSA and the bodies were dumped in a hole and buried. Rohingya Hindus from the area have told AFP that Rohingya Muslim militants swept into their villages on August 25, attacking people who stood in their way, killing many and taking others away into the forest. Later, with further search operations, more corpses of Hindus were found taking the death toll up to 45. 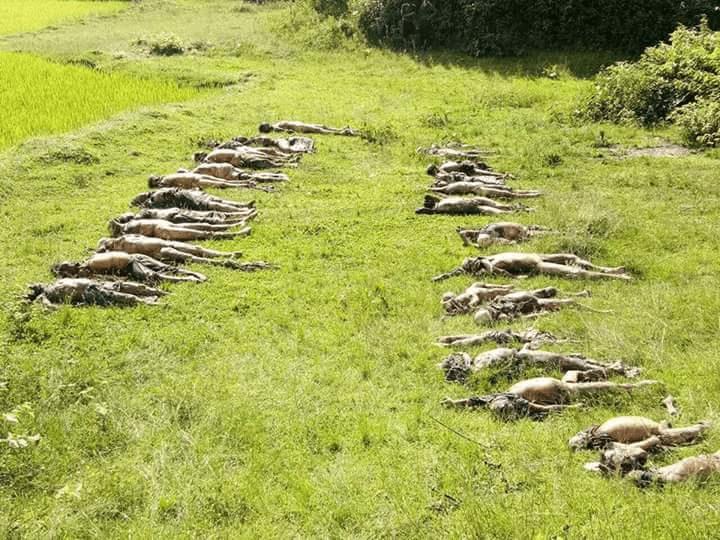 With the detailed reports by security agencies revealing Rohingyas’ connections with terror groups, the Central government has decided to deport 40,000 Rohingya Muslims. The Central government told the Supreme Court that Rohingya refugees pose a threat to national security. The SC deferred the hearing of the case till Nov 21st by saying that the case must be handled by balancing the issue of national security with a humanitarian approach- relaxation should be made in case of women, children, sick and the old. On the other hand, 51 prominent personalities had written an open letter to PM Narendra Modi demanding not to deport the Rohingyas because they believe that one must not deprive any group of its human rights for the sake of national security. The list includes the names of prominent seculars like Shashi Tharoor, Prashant Bhooshan, P. Chidambaram, Sagarika Ghose, Karan Thapar, Yogendra Yadav, Teesta Sitalwad, Swara Bhaskar, etc.

Although various humanitarians and liberals have protested against the central government’s policy to deport the Rohingya Muslims, the government has already started deporting them.

According to a report published by DhakaTribune, India’s BSF has sent back 18 Rohingya Muslims back to Bangladesh through the Satkhira border. This must come across as a rude surprise to Save Rohingyas Cabal in India who have been trying their best to retain Rohingyas in India, despite security threats.


The people from the Ganarajpur Border Security Force camp in Basirhaat, North 24 Parganas had forced these 18 refugees back to Bangladesh. Over the last three weeks, the BSF had expelled 57 refugees four times back to Bangladesh through various check posts. Following the incidents, Bangladesh has tightened its border security its western border with India amid concern that hundreds of Rohingya Muslim refugees could be pushed into its territory. Due to tight security in the Indo-Bangladesh porous border, BSF has successfully stopped any new Rohingya infiltration. A report by IndiaToday accuses BSF of using chili and stun grenades to stop infiltration by the Rohingya Muslims.

The Rohingyas have a long history of terrorist activities which started back in 1947. Even before Burma became independent in January 1948, the Muslim leaders of Arakan met Jinnah in 1947 and proposed him to incorporate the Mayu region into East, which Jinnah turned down. The Rohingya leaders formed Muhajid groups to carry out jihad and separatist movement, which still continues today. The region saw numerous extremist and insurgent movement, which forced the Myanmar government to carry out military-crackdown at regular intervals precisely in 1960s, 1978, 1991-92, 2012, 2015 and 2016-17. The Rohingyas are themselves responsible for their persecution to some extent.

To end the discussion with, let me share some information:-

1.If someone faces persecution and leaves the region, he will try to settle in a safe and peaceful place. In India, the most disputed and chaotic region is the state of Jammu and Kashmir. Why did 10,000 Rohingya Muslims go to the most disputed region in India instead of a safe and peaceful place? Rohingyas are settling in J&K and Rohingyas have links with JeM, LeT and Hijbul Muhahidin groups, which cause unrest in Kashmir. Are the Indian liberals that much dumb to not see the conspiracies?

2.The DhakaTribune reported that 16,000 Rohingya Muslim women are pregnant amid critical situation in Bangladesh. How could these women afford getting pregnant when they are facing “the most brutal persecution” and are living a miserable life in refugee camps.

3.Are the Rohingyas trying to gather sympathy by any means? Look at the image of the child crying in the lap of a Rohingya woman. The woman is clearly pinching the child to make him/her cry. 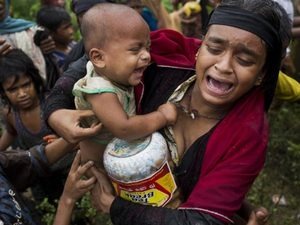 Read What Barkha Dutt had to say about NDTV? Now Read what She didn’t Say

The Tej Pratap-Kid’s conversation may be funny, but the kid has pointed at a systemic rot

How history was monopolized by Congress