Before You say Aung San Suu Kyi is a cruel, heartless leader, Read these facts first

With the Rohingya Muslims roaming from countries to countries to find a shelter where they can settle peacefully, the whole world has joined to criticize Aung San Suu Kyi for her silence, inert attitude, and possible support towards the persecution of the so-called world’s most persecuted minority group. The Organization of Islamic Cooperation, which includes more than 57 Muslim countries, has criticized the atrocities on the Rohingyas. In a tweet, the Nobel Laureate Malala Yousafzai called the treatment against the Rohingyas “shameful and tragic” and criticized Aung San Suu Kyi for failing to provide justice to the Rohingyas.

My statement on the #Rohingya crisis in Myanmar: pic.twitter.com/1Pj5U3VdDK

Baroness Sayeeda Warsi, the first Muslim woman to serve in the UK cabinet, tweeted– “A campaign of genocide is happening now on the watch of Nobel Laureate Aung San Suu Kyi & this is Foreign Office response?”

A campaign of genocide is happening now on the watch of Nobel Laureate Aung San Sue Kyi & this is @foreignoffice response? #Rohingya pic.twitter.com/QllJpQE4C4

Muslims, liberals and human rights activists have been critical to Aung San Suu Kyi, which is evident from this type of posters which shows the Nobel Laureate as a blood-sucking vampire. 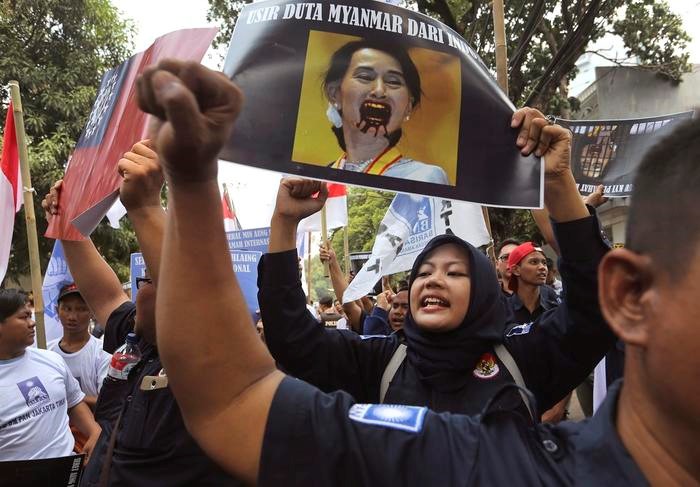 The social media is flooded with images of Rohingya Muslims facing persecution at the hands Buddhists. Images like this, brings out the pain, suffering and horror faced by the Rohingyas- 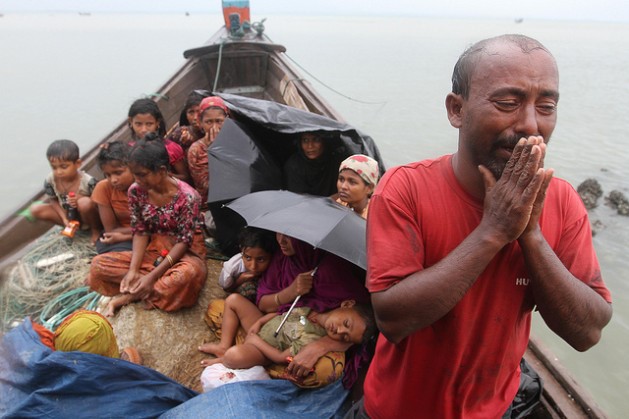 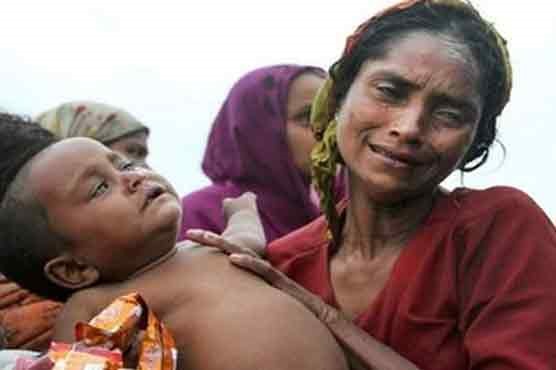 But, there is another side of the story. The people, who are showing the persecution of Rohingyas, will not show these images: – 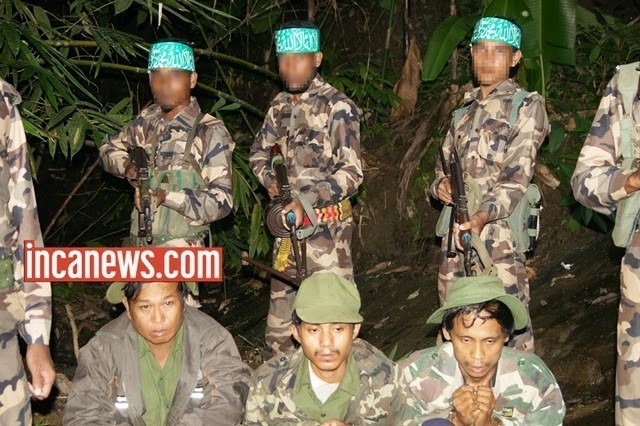 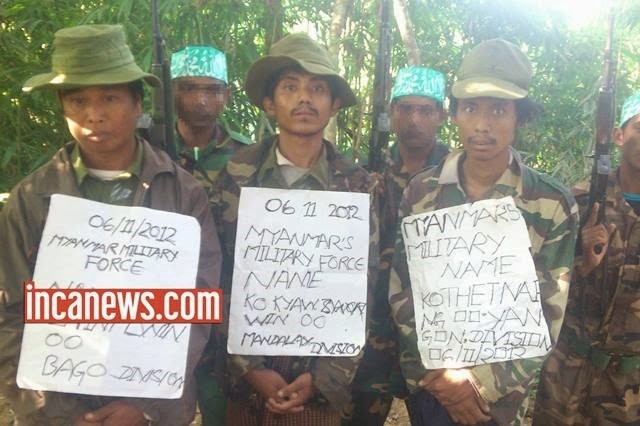 These were three Burmese army engineers abducted by the militant group Rohingya Solidarity Organization (RSO) in 2012. The militants later decapitated the three captives. According to the sources, the RSO receives funds and supports from pro-Pakistani and pro-ISI group like Jamaat-e-Islami (JeL) which the Bangladesh government has outlawed. During a terror-attack in Maungdaw township in Rakhine state of Myanmar in October 2016, the RSO cooperated with another terror group called Aqa Mul Mujahidin and received full support from JeL. The attackers were all Rohingyas and were at least 500 or 600 in number led by some core terrorists of Aqa Mul Mujahidin. The terror attack left at least 26 civilians and 9 policemen dead. On January 13 of 2014, 50 Duuchiyardan Muslim villagers led by the core group of 10 RSO-trained militantas  attacked a four-man Burma Police patrolling team near Duchiyardan village by the Bangladesh border and killed them all.

The RSO has links with other terrorist groups like Aqa Mul Mujahidin (whose leader Havistoohar attended a “six-month Taliban training course in Pakistan”), JeI in Bangladesh and Pakistan, Gulbuddin Hekmatyar’s Hizb-e-Islami in Afghanistan and Hizb-ul-Mujahideen (HM) in Jammu and Kashmir.

In April 2017, Atta Ullah, the leader of another newly formed terrorist group called Arakan Rohingya Salvation Army (ARSA) issued a video challenging Aung San Suu Kyi that his group would kill millions and would continue to fight against the military crackdown. As a result, ARSA carried out a massive attack in August 2017, which left 21 insurgents and 11 security personnel dead. The group warned about more future attacks. The army said- “In the early morning at 1 a.m., the extremist Bengali insurgents started their attack on the police post … with the man-made bombs and small weapons”.

The history of terrorist attacks in Rakhine state of Myanmar is a long one. It all started when Pakistan was torn out of India in 1947. The Muslim leaders from Arakan, Burma met Mohammad Ali Jinnah to insist him to annex Buthidaung and Maungdaw townships into East-Pakistan. Jinah refused saying that he could not interfere with Burma’s internal matters. After the refusal, the Muslim leaders approached government of Burma to let the two townships merge with Pakistan. Naturally, the proposal was rejected. This led to the formation of local Mujahidin groups against the Burmese government. The leader of Mujahidin group Mir Kasim began to conquer territory and forced the non-Muslim Rakhine people to flee. This prompted the Burmese government to crack down the Mujahidin movement, which lasted more than one decade. After some years of gap, former Mujahidin leader Zaffar Kawal founded the Rohingya Liberation Party on 15th July 1972 by collaborating with various Mujahidin factions. This group started terrorizing the region until the Burmese government started the Operation Red Dragon to expel the Rohingya insurgents from the region completely.

From time to time, the Rohingyas have started new insurgent groups. The RSO was formed in 1982 and the ARSA was formed more recently, in 2012 following the 2012 Rakhine State Riots. The 2012 Rakhine State Riot happened due to the gangrape and murder of a non-Muslim Rakhine woman by the Rohingyas, which was followed by the burning of Rakhine Buddhists, who carried out the notorious activities after offering Friday’s prayer.

The Rohingya insurgent groups like RSO, ARSA, Arakan Rohingya nationalist Organization (ARNO), etc have direct links with Taliban, Al Qaeda, Harkat-ul-Jehad Islami-Bangladesh, etc. In 2002, a videotape surfaced which showed Rohingya militants receiving training at Taliban camps in Afghanistan. What is currently thought to be a struggle of existence for the Rohingya minorities in Myanmar, will soon become the Islamic Jihad movement in the region- the same thing happens with any Islamic terrorist organization which claims to fight as a liberation group but later carries out the eternal aim of Islamic expansion. The Rohingyas consider themselves to the descendants of Arabic traders who settled in Rakhine state centuries ago. These people never tried to blend themselves with the local culture and tradition. There are many instances of forcefully marrying Buddhist women and converting them to Islam. The intolerance shown by these groups towards the neighboring communities is the prime reason why a separatist movement started in the first hand during 1947.

Clearly, Aung San Suu Kyi is just cleaning her home and protecting her people. Why do people think that a Nobel Laureate should not think about her people and stop the military crackdown on the terrorists just to please the World liberal community?

To end the answer with, here is a question for the readers. Rohingya insurgent groups like RSO and ARSA has direct links with Hizbul Mujahidin of Jammu and Kashmir. The Rohingyas settled nowhere in India, but in Jammu and Kahmir. Is there something we are missing?