A US-based lawyer Raya Sarkar has sent shockwaves through Indian academic circles by posting a list of Indian professors accused of sexual harassment by several students and researchers. Coming close on the heels of the #MeToo campaign, this crowd sourced list which began with 51 names is growing by the day, as victims/survivors keep adding to the list started by Raya Sarkar on her Facebook page. 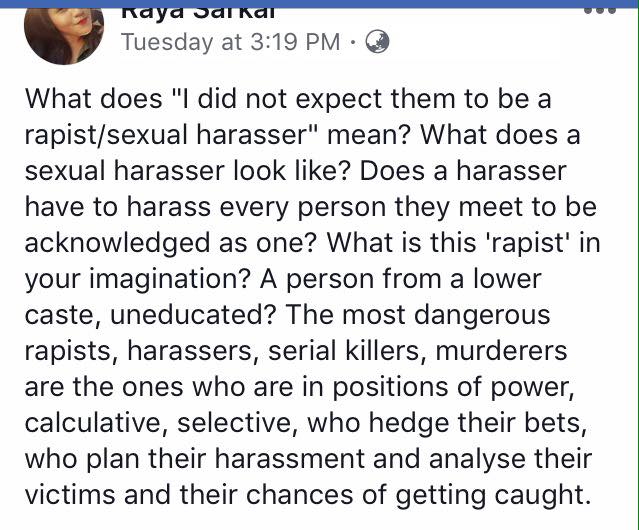 A group called ‘Feminism In India’, expressing solidarity with Raya Sarkar, points out that “In the culture of silencing and victim-blaming surrounding sexual harassment allegations, it is of utmost importance to amplify the voices of survivors and most importantly, believe them.”

Ironically, the first ones to denounce these voices amplified by Raya Sarkar, were the leftist female academics/activists who project themselves as vocal ‘feminists‘! This group headed by the likes of Nivedita Menon, Brinda Bose, Kavita Krishnan and Ayesha Kidwai, used their mouthpiece ‘Kafila’ to disparage and dismiss this “initiative on Facebook, in which men are being listed and named as sexual harassers with no context or explanation.”

These are the same ‘feminists’ who were aggressively supporting the #MeToo campaign on Social Media just a while ago. Kavita Krishnan once tweeted: “Why should we ignore abuse? Why should we not name and shame?” However, in the ‘Kafila’ statement these ‘feminazis’ write “Where there are genuine complaints, there are institutions and procedures which we should utilize.” On other occasions, Krishnan has tweeted: ” I would rather name and shame…can’t file complaints against such abuse.” 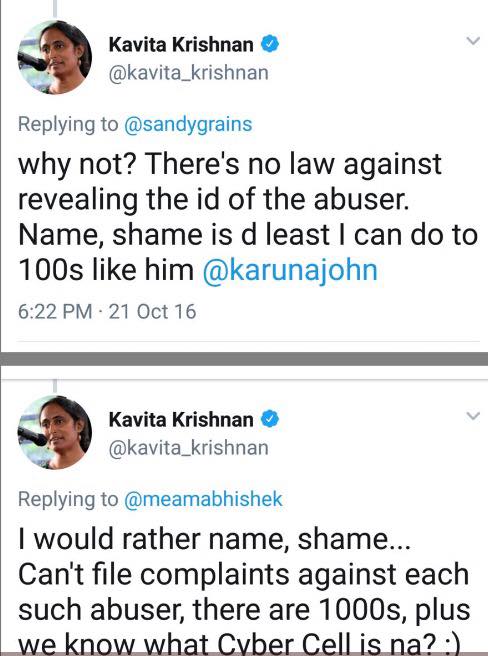 Why are these ladies advocating one set of rules for the general public and another one for their own Leftist colleagues?

Raya Sarkar implies that these upper-class ‘intellectuals’ who had no qualms about supporting the #MeToo Campaign on social media, are turning prickly now when their own colleagues, “brothers, lovers and husbands” are involved.

This list, which Leftists are criticising as a ‘smear campaign’ and likening it to ‘blackening faces’, is meant to be a cautionary list for students. 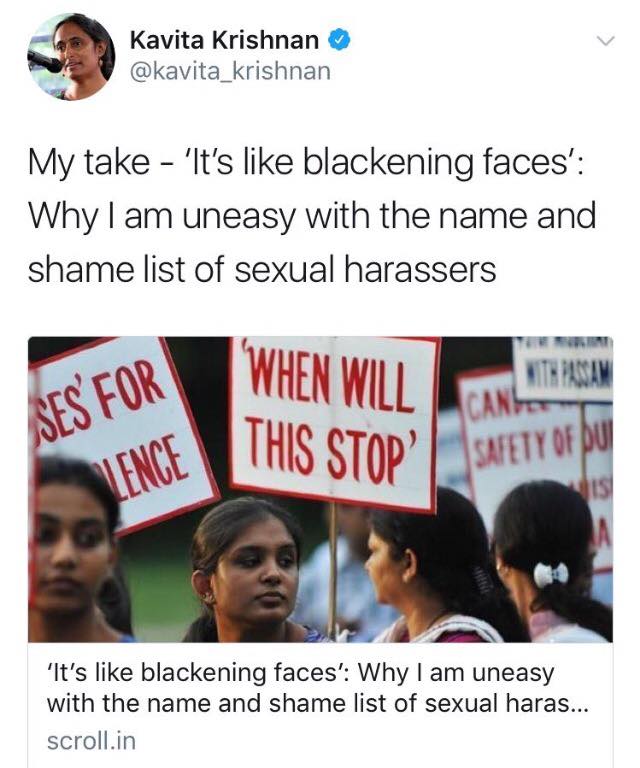 Raya Sarkar’s list, crowdsourced from various alleged victims of sexual harassment, includes names like Partha Chatterjee, Ahmer Anwar, Prasanta Chakraverty and Lawrence Liang. There are names from various academic institutions across India, including prestigious universities like JNU, University of Delhi, Jadavpur University and FTII. It is worth noting that Lawrence Liang happens to be a member of ‘Kafila’, the online Leftist portal that was the first to publish Nivedita Menon’s rejoinder to this list. Brinda Bose, who is a signatory, has worked with Prasanta Chakravorty and co-authored several papers with him.

Also worth remembering here is the fact that most premier universities in India are regarded as leftist bastions and these leftist ‘intellectuals’ live and work by their own rules. Can you imagine what would have happened had Raya Sarkar’s list not been dominated by Leftists? All hell would have broken loose, as this clique of vocal, well-connected, upper-class ‘Intellectuals’, who dominate Indian academia, used every forum available to them to demand ‘justice’! And horror of horrors, imagine how they would have reacted, had there been any ‘Bhakts’ mentioned! 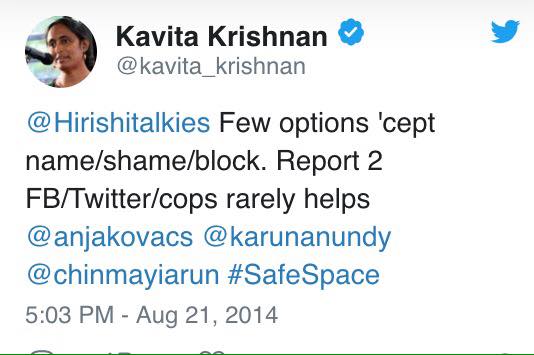 The list, as it stands, will not change anything. The alleged perpetrators and their powerful supporters will raise so many objections that they’ll end up outnumbering and drowning out the offences. Right now, the disapproving silence in academic circles is palpable. Therefore, those innuendos and overtures will continue, perhaps after a brief lull, and many women will just have to tolerate them if they don’t want their theses to be delayed and scholarships to be denied!

The Left-liberal elitism that voices no protest when Mahmood Farooqi is acquitted despite the victim’s ‘No’ getting categorised as a ‘feeble no’, expresses no disapproval at Tarun Tejpal’s misdemeanours, will hardly take kindly to the naming and shaming of it’s own. Another important question that arises here is whether the Committees constituted for redressal against sexual harassment are serving any purpose. Are the students/researchers wary of approaching these bodies that might be headed by people who are associates/friends of the alleged perpetrators?

Raya Sarkar says her Facebook account was suspended due to ‘mass-reporting’ right after she started this campaign. Her access to the account was restored only after she spoke to Facebook authorities in Palo Alto. This, along with the fact that she was told to bring down the list of alleged offenders, once again brings up the issue whether that much-touted ‘Freedom of Expression’ is meant for only the ‘Chosen Few’!