Dear Ravish Kumar Pandey, why do you have a problem with Brahmin Basti?

by Tanya Trivedi
in Opinions, Trending
0

These are left-liberals for you, especially Ravish Kumar who is now crying over a weird issue. What is it? Let’s find out.

Ravish Kumar has a problem with “Brahmin Basti”

A few days after inciting the violence over the Agnipath scheme by misleading the youth, Ravish Kumar is now back with a new foolish issue. He took to his social media handle to share a photo displaying a board with names of several areas written on it. One of the areas mentioned on the board is “Brahmin Basti”. In his usual ‘sarcastic’ style, Islamist lover Ravish Kumar Pandey wrote, “A colony in South Delhi. How this colony got its name, how it was settled, it should be studied.” 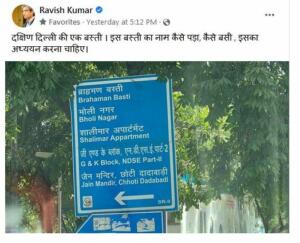 You see, Ravish Kumar wandered through the streets of Delhi to find this board and soon after he discovered it, he did not waste even a second sharing the picture on Facebook. But, what makes me say this? Well, if you have ever visited Delhi and explored the city, you’ll find that most of the streets and areas are named after Mughals or other communities like Bengali, Harijan and many more.

However, people are now waking up against such shameless agendas being run by the likes of Ravish Kumar and it was quite evident in the comment section. A Facebook user asked, “Why is there an objection to the name of the Brahmin Basti? Bengali Colony, Punjabi Colony, Sindhi Colony, Harijan Basti, Aurangzeb Road, what about all these?”

Another user even wrote, “Maharaj, in every village of Bihar, there is Paswan Tola and Ahiri Toll. You will only waste the time of the public. Teesta has been arrested, try making something on it, and you will gain TRP.”

It is not the first time that Ravish Kumar has stooped to this low. He keeps on touching new lows to peddle his agenda and we don’t expect much from a liberal journalist like him. Ravish Kumar – the journalist who exactly knows how to throw the nation under the bus by spreading false news over the Agnipath scheme. He had taken to his social media handle and attempted to fuel the protests and violence. In his Facebook post, he had urged people to not oppose the Agnipath scheme but sarcastically said that “Jobs are not the big deal at the moment but the religion.”

Read more: Ravish Kumar is totally responsible for the violence that erupted due to the Agnipath scheme

As we saw later, the protests grew nationwide leading to the loss of public property worth more than 1000 crores. The protests shattered the peace all across the nation.

Simply put, Ravish Kumar is an opportunist who keeps looking for ‘boards’ and issues to attack the government. The journalists like him should not be taken seriously as it could result in a nation filled with hate, chaos, and anarchy.

“Teesta Setalvad a strong voice against hatred” – UN, are you serious?