by Rahul Gupta
in Geopolitics
0

The growing Chinese presence in the area of Indian ‘influence’ posed a severe threat to Indian security and to counter China’s nefarious activities, India brought its own ‘Necklace of Diamonds’ strategy.

Already growing skirmishes around the land border may anytime escalate into a full-scale war. Moreover, the two hostile neighbors, China & Pakistan have made security architecture against India. Using the unofficial strategy, ‘String of Pearls’ China has now made its presence near Indian Waters.

Military base in Mauritius

"In recent imagery, progress can be seen on hangars along the runway which measure 180 feet long and 200 feet wide—big enough to house large military aircraft such as India’s P-8I Poseidon, which measures 123 in length and has a wingspan of 126 feet."https://t.co/dpmw4Q7H0l https://t.co/PjDJSHxxu5

The report is a result of years of negotiations and diplomatic efforts to deepen the defense ties with Mauritius. Although Mauritius was always in the favor of India, partnership in the making of critical maritime infrastructure will take the ties to another level. Further, the military base will give a boost to India’s effort to build a strong defense architecture around the Indian Ocean to counter the Chinese ‘string of Pearls’.

Also Read: How Brahmos missiles guard the long coastline of India and the waters around it

It is a strategy of China to make its presence in the Indian Ocean, Arabian Sea, and the Bay of Bengal. In its aggressive push for expanding footprints in the strategic location by ‘capturing’ strategic ports through ‘debt trap diplomacy’ in the region, China is building dual-use ports in India’s neighborhood.

In consonance with its Belt and Road Initiative (BRI), China is trying to revive the ancient silk route to market its product and under the veil of business opportunities, it has captured many ports in the region.

Moreover, the country has already captured the strategic port location in the region through its debt-trap diplomacy. The Doraleh multipurpose port in Djibouti, Gwadar & Karachi Deepwater port in Pakistan, Hambantota & CICT Terminal in Srilanka, & Kyaukpyu port in Myanmar have already been completed.

Also Read: India cancels a big defence contract with the US

Offence is the Best Defence

After realizing the Chinese nefarious activities, India started to fortify its presence in the Indian Ocean region and made strong security ties with the region’s countries. India believes it is the ‘net security provider’ in the region and any infiltration around the area will sabotage the Indian security. Concerning this, India’s counter-strategy measures in the form of ‘Necklace of Diamonds’ have checkmated the Chinese ‘String of Pearls.’

In its strategy, India first made its presence at the chokepoint of the Strait of Malacca. With the India-Singapore Bilateral Agreement, India secured the Indian Navy presence at the Changi naval base in Singapore. Further, India is also making strategic alliances with the China’s neighbors like Mongolia and Japan as the countries are also having the border disputes with the Dragon. To enhance the strategic cooperation, on September 9th, 2020, the Government of Japan and the Government of the Republic of India made an agreement concerning Reciprocal Provision of Supplies and Services between the Self-Defense Forces of Japan and the Indian Armed Forces (so-called “Acquisition and Cross-Servicing Agreement” or ACSA).

Moreover, securing the military access to Sabang Port in Indonesia, India almost choked out the Chinese large chunk of trade and crude in the region. Furthermore, India and Seychelles agreed to develop a naval base on the Assumption Island of Seychelles. The military access to the strategic naval base will be critical in ensuring Indian presence in the African continent as China wants to increase its presence in the region.

To provide security and safety to Indian ships in the Persian Gulf, India has also got access to Duqm Port of Oman. The Duqm is strategically located between the two Chinese ports Djibouti and Gawadar and will provide a strong deterrent against both China and Pakistan’s misadventure. 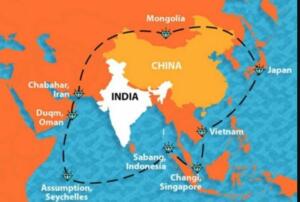 In addition to this India has started to form a strategic Brahmos alliance with the region’s neighbors. In a recent formation of such an alliance, India has entered into an agreement with the Philippines for the sale of Brahmos. The $374 million deal is an attempt by India to counterbalance the Pakistan-China security nexus to increase the military presence in the close neighbor respective countries. It will not only provide a good market to the Indian defense industry but will give the Chinese the taste of their own medicine.

Successfully reducing the dominance of China in the Indian Ocean region with its strategic presence, India is now focusing on the improvement of its own defense equipment. It is a matter of fact that most of the pro-china leaders in the neighboring countries are now out of power and learning the lesson from China’s debt-trap diplomacy, they are now giving more leverage to Indian companies for infrastructural and other developmental work. In a way, China has dug its own grave by aggressive debt-trap diplomacy and now India is pouring soil from the top in the form of a Necklace of diamonds.