5 controversies of Moose Wala: Death doesn’t absolve anyone of their sins

Punjabi singer Sidhu Moose Wala has been shot dead by unidentified assailants in Jawaharke village of Mansa district on Sunday, May 29. It is pertinent to note that the reports of his unfortunate death came a day after the Punjab Police withdrew the security of 424 people, including Sidhu Moose Wala.

The reports suggest that the attack took place when he was travelling for a personal meeting. AK-47 rifle was used to incessantly fire on Moose Wala. The Punjabi singer, who was with two others in his car, was sprayed with bullets by unidentified gunmen. He died on the spot while his friends were injured. Moose Wala had four police gunmen on his security detail, out of which two were withdrawn after the Punjab government decided to withdraw the security.

Hours after Sidhu Moose Wala passed away, Canada-based gangster Goldy Brar took the responsibility for the attack. Goldy Brar is believed to be the close aide of the Lawrence Bishnoi gang.

In a social media post, Goldy Brar wrote, “Today, Moosewala was killed in Punjab, I, Sachin Bishnoi, Lawrence Bishnoi take the responsibility. It’s our work. Moose Wala’s name surfaced in our brother Vikramjit Singh Middukhera and Gurlal Brar’s murder, but the Punjab Police did not take any action against him. We also came to know that Moose Wala was also involved in the encounter of our associate Ankit Bhadu. Moose Wala was working against us. Delhi Police had taken his name but Moose Wala used his political power and saved his skin each time.” 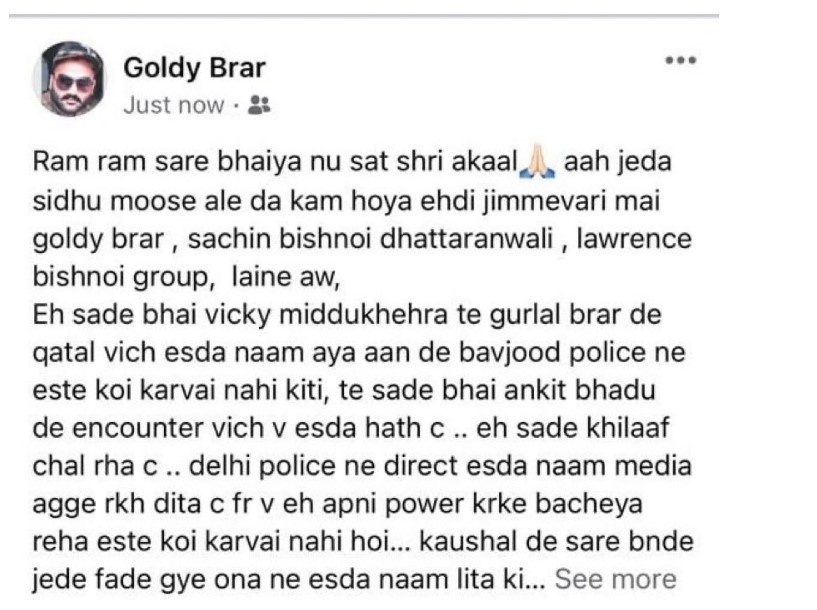 Ever since the unfortunate news of his tragic death broke out, his fans all over the world have gone numb. While many are expressing grief, others are referring to 29th May as a ‘Black Day’. The controversial singer had a very big fan following. His song “Scapegoat” was watched by more than 2.2 million people. He had a very big subscriber base on his channel.

From politicians to actors and many more, the entire cabal is pouring in condolence messages and is expressing grief over the death of Moose Wala.

Ajay Devgn took to Twitter to express his grief. He tweeted, “Stunned by the shocking death of #SidhuMooseWala. May Waheguru give his loved ones strength in their hour of grief. RIP departed soul Still trying to wrap my head around this one.”

Stunned by the shocking death of #SidhuMoosewala. May Waheguru give his loved ones strength in their hour of grief. RIP departed soul 🙏 Still trying to wrap my head around this one. pic.twitter.com/voGupsgZ2B

Let me ask you a question. Does death absolve anyone of their sins? Especially if the sins are against the interest of the nation. Here I’ve compiled a list of sins committed by Sidhu Moose Wala and it is up to you to think whether the grief on such a scale is justified or not?

Sympathising someone is another thing but it is up to you to think whether glorifying him for what he did is right or wrong?

Sidhu Moose Wala started his career as a songwriter for the song ‘License’ by Ninja, and began his singing career with ‘G Wagon’. He became extremely popular not only in Punjab but all across the globe for hit Punjabi tracks like ‘Legend’, ‘Devil’, ‘Just listen’, ‘Jatt da Muqabala’ and ‘Hathyar’.

Let’s just say that he wasn’t the person he projected to be in his videos. He was a rather simple man who used to make such songs only because the audience demanded it. But, what about the other sins?

Now, how can one justify Moose Wala’s support for Khalistani ideology?

Siddhu Moosewaala was close Associate of Lucky Patial and allegedly he gave crucial info of Vicky Middukhera and killed by Kaushal Gang Members(Lucky Patial Gang). Middhukhera was Close associate of Lawrence Bishnoi(Goldy Barar Gang) thats why Siddhu was on the target of GoldyB.

While the nation is mourning the death of Moose Wala, one must never forget the sins he committed against the interest of the nation. And, death can never absolve anyone of their crimes.

Beware! You are being watched and heard everywhere every second