Tata Consultancy Service (TCS), the crown jewel of the Tata Group, has become the world’s second most valuable IT services brand as per a report by Brand Finance. The company’s brand value is estimated at 16.78 billion dollars behind Accenture’s 36.19 billion dollars. Among the top 10 IT services companies by brand value, 3 are Indian firms – TCS, Infosys, and Wipro.

Rajashree, chief marketing officer, TCS, said in a statement, “Our new brand positioning ‘Building on belief’ captures our aspirations and convictions. Our ‘customer-centric focused’ strategy and focus on research and innovation over the last decade positions us to capitalise on upcoming opportunities.”

TCS was started in 1968, and today it is one of the largest multinationals in the world with operations in 46 countries. It is the largest Indian company by market capitalization with a capitalization amount of around 200 billion dollars. The company alone generates 70 per cent of the dividends of the Tata group and carried the group in the last decade which was very tough for Indian corporate houses.

The Indian IT sector generates more than 100 billion dollars every year for the country in exports and TCS is the leading player in the sector. Savio D’Souza, valuation director, Brand Finance said, “Despite the global pandemic and its inevitable impact on businesses, the IT services and technology sector has proven that it is equipped to perform with successful results. By re-evaluating the market and gaining a clear focus on cloud services, technology consulting, machine learning, and artificial intelligence, IT services brands – from India and around the world – will continue to flourish and innovate in the face of challenges posed by pandemic-related shortages and restrictions.” 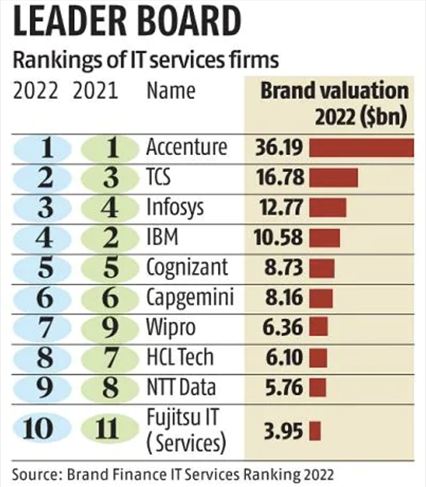 TCS was started by Faqir Chand Kohli, popularly known as F. C. Kohli. He is also known as the father of the Indian software industry. Kohli came from a Hindu Khatri (very influential business community) family and introduced the traditional Indian business culture in the working culture of TCS. The company built a strong academic connection for the training of its workers and Kohli prepared the courses of many institutes like Virmata Jijabai Technical Institute (VJTI) to train the students according to the needs of the industry. It was one of the earliest examples of industry-academia interaction in the country.

TCS was registered at the Bombay Stock Exchange (BSE) in 2004 and within one and a half-decade, it became the second-largest company in the country in terms of market capitalization.

The company has provided IT solutions to many government and private sector businesses in India and abroad. It designed an ERP system for the Indian Railway Catering and Tourism Corporation. It was awarded a six-year contract in 2013 worth over 1100 crores to provide IT solutions to the Department of Posts.

The company was trusted for the maintenance of Aadhar data which is the world’s largest biometric identity system. In India, the company established its centres in small cities like Patna, Indore, unlike other big companies which kept their operations confined to metro cities.

TCS is today the leading company of the group, snatching the position from Tata Steel and Tata Motors, which used to be dominant players earlier. Salil Parekh, CEO, Infosys, said, “Our clients have rapidly scaled their digital adoption in the last two years and have reposed tremendous trust and confidence in our ability to help them transform.”

TCS has a history of more than five decades, and today the company has more than 5 lakh employees spread in more than 50 geographies. TCS is undoubtedly among the greatest companies that came out of India, and it has many more good decades ahead.