“Shia Muslim with an Indian wife made us lose”, Pakistan blames Hasan Ali for its ouster from T20 World Cup

Pakistani cricketer Hasan Ali has become the target of Pakistani fans and trolls as they hurled choicest of racist abuse and expletives after his below-par performance in the T20 World Cup knockout game on Thursday.

Reportedly, the Australian batting duo of Marcus Stoinis and Matthew Wade put an incredible shift at the dying moments of the Semifinal clash against Pakistan to clinch a 5-wicket victory and seal a place in the summit clash of the World Cup.

Hasan Ali is a match-fixer; We lost because he is a Shia: Pakistani fans

Pakistan could have easily crossed over the line, if it wasn’t for the dropped catch by Hasan Ali in the penultimate over and his expensive spell. Ali bowled four overs and shelled 44 runs without picking a single wicket. However, it was the dropped catch of Wade that proved too costly for the Pakistani side as the southpaw pumped the next three balls for monstrous maximum and killed the chase.

Hasan Ali was reduced to tears but the brash, hooligan and raucous Pakistani fans started targeting Ali for belonging to the minority Shia community. Meanwhile, others outrageously called him a match-fixer in addition to prefixing flowery language. 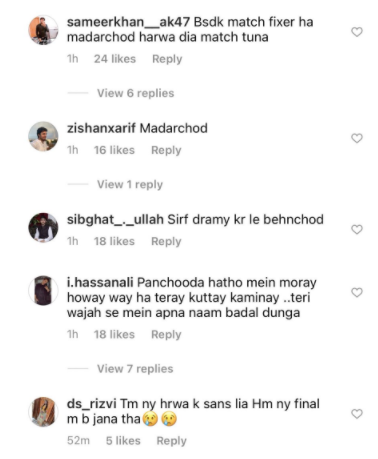 One Instagram user theorized his match-fixing theory by tweeting “Traitor, how much money did you take from Australia (to lose the match?).” 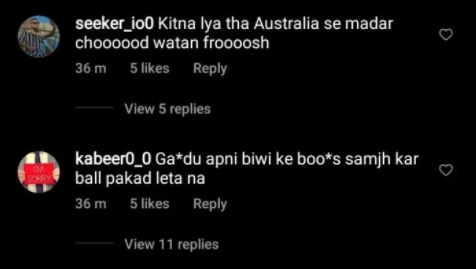 Pakistan is infamous for trampling upon the rights of minorities. Shia, the community to which Hasan Ali belongs was evoked and the pacer was abused for it. One tweeter said, “Hasan Ali is a Shia. One Shia has took Pakistan down the drain,” 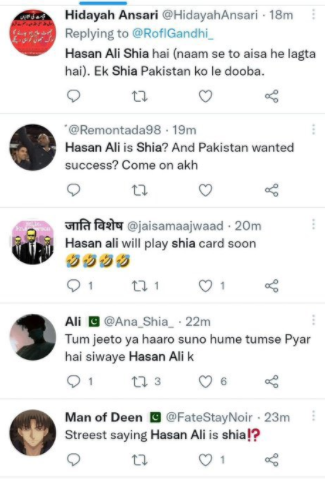 Meanwhile, another targeted Hasan Ali by stating, “Hasan Ali takes revenge of the Shia oppression in nearly every match,” 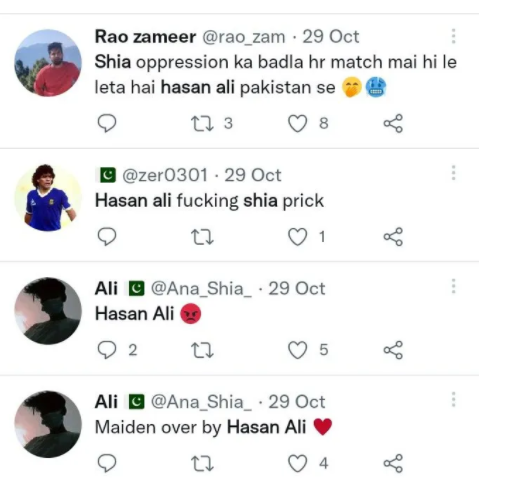 Meanwhile, Pakistani fans coming out of the stadium after watching the match gave their piece of mind to Hasan Ali as well and not in a good way.

Given that the wife of Hasan Ali is an Indian by the name of Samya Arzoo, one Twitter user alleged that the Pakistani pacer threw the match to please his wife. “He should also give his mother and sister to India for a night. M**herf****r, lost the match intentionally.” 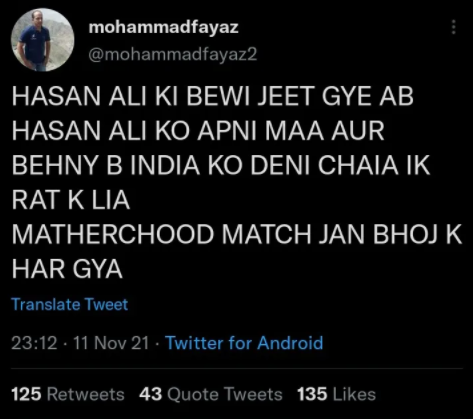 Shami was targeted by Pakistani handles as well

Compare the abuse copped by Hassan Ali to that of Mohammed Shami and one would realize the eerie similarities. At the time, ISI had swung into action and initiated its bot army to collectively target Shami. However, few gullible and propagandist journalists on this side of the border (Read: Barkha Dutt) twisted the narrative and portrayed that Indian fans had abused Shami.

However, as reported by TFI, ample proof was present to showcase that it was Pakistani handles who were unnecessarily trying to ratchet up the controversy. Former Indian team captain Virat Kohli got swayed by the fake propaganda and played into the hands of Pakistanis.

Read More: How the anti-Shami campaign was manufactured in Pakistan to malign Hindus

Commenting on those who trolled Shami’s religious identity, Kohli said, “Attacking someone over religion is the most pathetic thing a human being can do… it is the lowest level of human potential one can operate at. We stand by Shami fully. We are backing him 200%. All those who have attacked him can come with more force if they want to (but) our brotherhood, our friendship within the team… nothing can be shaken”

By condemning an imaginary hate campaign against Shami, Virat Kohli had all but fueled anti-Hindu rhetoric on social media. However, in the case of Hassan Ali, the abuse and vitriol were sent from the Pakistani fans in atrociously large quantities and yet no one from the Pakistani cricketing fraternity has condemned it.

Mohammed Rizwan had quickly shown fake solidarity to Shami but he hasn’t come out and shown support to his own teammate. Meanwhile, skipper Babar Azam, instead of defending his player in the public, threw him under the bus and claimed that Pakistan lost the match then and there when the catch was dropped.

“India belongs to Hindus, and they can return anytime”, CM Himanta sure doesn’t mince any words