Why Kejriwal is cooking up a false shortage of coal

On Saturday (October 9), Delhi Chief Minister Arvind Kejriwal pressed the imaginary panic button when he remarked that Delhi was suffering from a coal shortage. Kejriwal also stated that if Prime Minister Narendra Modi didn’t intervene, the electricity generating plants might go dark. However, by making false claims of ‘coal shortage’, the Kejriwal government backed itself into a corner.

Reportedly, two years ago, the AAP government had announced that the Delhi administration had put a complete ban on coal-based power plants in Delhi. Moreover, it also imposed a ban on the industries that were using coal as a power source. 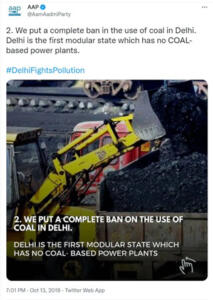 Delhi Power Minister Satyendra Jain last year had remarked, “In a bid to bring down the NCR pollution, the Delhi government shut down the Indraprastha power plant in 2009, Rajghat plant in 2015, and Badarpur plant in 2018 due to increased environmental concerns. Delhi is the only state where no thermal power station is running.”

Moreover, Jain had also written to the Centre urging it to shut down all 11 thermal power plants in the National Capital Region (NCR), citing pollution as a reason when the AAP government’s ‘revolutionary’ odd-even scheme failed to yield any dividend.

If Delhi is not self-reliant then why shut thermal plants?

Realistically speaking, the ban on thermal plants could have only come to effect when Delhi had become ‘self-sufficient’ in generating electricity from non-conventional sources of energy. However, that certainly wasn’t the case here as the Delhi government, in an attempt to gain some measly woke points and few newspaper headlines, shut the power plants.

Thus, questions need to be asked to the Kejriwal government. If the national capital is entirely reliant on the centre and other state power plants for electricity, why did it shut shops of thermal power plants without having a contingency plan in hand? Why no other plants with non-renewable sources of power were incorporated so that Delhi could meet its own demands.

It doesn’t make sense to dictatorially close thermal plants and then cry foul when the electricity supply is volatile. Perhaps, instead of using taxpayers’ money for populist measures like making electricity bills free, the Kejriwal government could have used the money to construct ‘eco-friendly’ power plants.

Coal shortage? A similar tactic to that of fake oxygen shortage?

Kejriwal creating controversy by planting false stories of coal shortage follows a similar political trope that he used during the second wave of the covid pandemic. Reported by TFI extensively, it was the AAP government in May that vehemently opposed the centre’s request to Supreme Court asking to conduct a detailed audit on the oxygen usage in the national capital.

The centre demanded the audit after the Kejriwal government created an artificial crunch of oxygen supply and cried hoarse on the national stage, besmirching the central government, while leaving the ordinary citizens to die.

However, Kejriwal was soon caught with his ‘Pinocchio-esque’ nose when the Supreme Court-appointed panel found that the Delhi government inflated Delhi’s oxygen needs by four times.

The SC audit report stated that Delhi needed 300 metric tons of oxygen, but the Kejriwal government raised the demand to 1200 metric tons. The report read, “Sub-group set up by Supreme Court for Oxygen audit of Delhi “noted gross discrepancy” in actual consumption claimed vs calculated consumption by a formula for bed capacity. Former (1140 MT) was “about 4 times higher” than latter (289 MT).”

Read More: After the incriminating revelation by SC panel on Oxygen fraud by Delhi govt, an audacious Kejriwal wants everyone to move on

The temporary glitch in coal supplies is not a new phenomenon — it happens almost every alternate year. The Union power ministry statement on Sunday assured that fears of a power crisis in India were overblown. The ministry of coal said, “ample coal is available in the country to meet the demand”. Kejriwal and his ilk should pipe down and instead answer the public on why they closed the thermal power plants.

‘Follow the rule of law or lose all privileges’ Madras HC makes its stand clear. No more special treatment for Sri Lankan refugees

The more the Bollywood-NCP-Sena nexus pushes back at NCB, the stronger it gets. Courtesy: PM Modi

Shah Rukh Khan’s career was already in decline, Aryan Khan put a complete end to it