by Abhinav Singh
in Trending
1

The Delhi government, led by Arvind Kejriwal, on Thursday vehemently opposed the centre’s request to Supreme Court asking to conduct a detailed audit on the oxygen usage in the national capital. Solicitor general Tushar Mehta said the Centre had supplied 730 MT of oxygen on Wednesday, which was more than the SC’s 700 MT benchmark.

However, quoting experts who believed that Delhi could manage 500-600 MT oxygen, Mr Mehta remarked that a thorough audit needed to be conducted to gauge the real demand. Moreover, the fact that Delhi was using more oxygen than Mumbai also arose suspicion as to where the extra oxygen was being diverted. 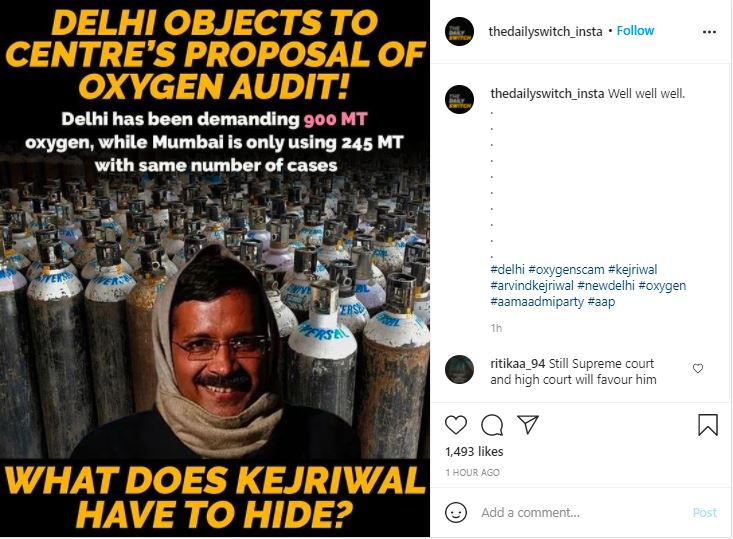 Meanwhile, the Kejriwal government, looking defensive, immediately objected to the audit and said that the Supreme Court should rather order an audit to look into the centre’s arbitrary allocation of oxygen and mismanagement of transportation to Delhi and other states.

The Solicitor General argued that unloading of the tankers was taking longer than expected in Delhi which was hurting the entire supply chain process.

“Unloading is taking too long since Delhi has a huge excess supply. This is causing a delay in the turnaround of tankers and fresh supplies. Any plan will only succeed if tankers and containers unload in a maximum of eight hours so that they can go back to the eastern part of India or Gujarat and get more supplies for replenishing the stocks,” added Tushar Mehta.

Further proving his point, Mehta remarked, “On Wednesday, not one complaint of stock out was received from Delhi. It may be noted that this was based on supplies of oxygen of 585 MT the day before on May 4, made to Delhi.”

Talking about a survey conducted to gauge the oxygen stock at 56 major hospitals in Delhi and 11 oxygen refillers, Mehta added, “The findings of the survey showed significant stock in hospitals in Delhi. Large quantities of oxygen, which reached Delhi in the evening yesterday (730 MT), have still not been distributed to hospitals, and that will improve the stock further.”

As reported by TFI, a few days earlier, the High Court had given an earful to the Kejriwal government for its mismanagement in the oxygen supply and threatened to give the responsibility to the centre.

The High Court said, “Set your house in order. If you cannot manage it, we will ask the central government to take over.” In a worrying observation, the Court observed that the government authorities appeared completely unaware about the ground realities and are just issuing ‘unreasonable orders’

Read More: ‘If you can’t manage, we’ll ask Centre to take over,’ Delhi HC tears into Kejriwal for mismanagement of Covid situation in Delhi

If the Delhi government is asking the centre for an extra 200 MT of oxygen then the centre rightfully has the claim to know where the current stock is being utilised. However, by not letting the centre conduct the audit, the Kejriwal government is only digging a hole for itself and raising more questions on its already tainted credibility.