The Hindu history of Afghanistan is simply fascinating

A brief history of pre-Islamic Afghanistan

Afghanistan has fallen to Islamist extremists once again. The Taliban have taken control over Kabul, and whatever little cultural heritage was left in the war-torn country is now being destroyed. Hindus and Sikhs have been forced to flee Afghanistan. In the 1970s, there were at least 700,000 Sikhs and Hindus in Afghanistan. By the beginning of the 21st century, they had been reduced to a few hundred. Where did these Indic minorities vanish? Today, the few remaining dharmic minorities of Afghanistan have been forced to flee their homeland. Bhartiya culture has been expelled out of Afghanistan. Our dharmic space is shrinking right before our eyes. But Afghanistan was not always so torn. Afghanistan was peaceful and it flourished when it was under Hindu rule.

Afghanistan is usually included in portrayals of ‘Akhand Bharat’, and the same is not without cause. Hindu culture is engrained in the land of Afghanistan. The Indian subcontinent is fragranced with Sanatan Dharma, which is why Islamic marauders hate the region to the very core of their radicalised hearts. To them, the Indian subcontinent is not just another piece of land they need to conquer. For them, it has been the conquest of the most thriving and rich civilisation which has been the goal and still is. Afghanistan – before the advent of medieval savages bearing the flag of the Islamic caliphate, was a predominantly Hindu and Buddhist land.

During the 7th century, the Rashidun Caliphate Arabs entered the territory that is now Afghanistan, after defeating the Sassanian Persians in Nihawand. Thus, the seeds of cultural genocide of Hindus were sown in Afghanistan. The name “Afghanistan” comes from “Upa-Gana-stan” which, in Sanskrit roughly translates to “the place inhabited by allied tribes”. This was the place from where Gandhari of the Mahabharat belonged. Gandahar, whose king was once the conspiring Shakuni, is known as Kandahar today, and it is under the Taliban’s control. Interestingly, the Pakthoons (Pashtuns) are descendants of the Paktha tribe mentioned in Vedic literature.

Read more: Hindus of Afghanistan – The genocide of the millennium

Of course, Raja Dahir Sen of Sindh ruled over parts of Afghanistan. He was the last Hindu ruler of Sindh, subsequent to whose death the region was conquered by a marauder named Mohammad Bin Qasim. However, the Hindu history of Afghanistan is so much more fragrant than what is normally told. The most prominent Hindu rule over Afghanistan, of course, emerged under the Hindu Shahis or Kabul Shahis, approximately from 850 to 1026 CE. Sanatan Dharma flourished in Afghanistan during these years. The Hindu Shahis of Afghanistan were Kshatriyas, but interestingly, their kingdom itself was established by a brahmin minister named Kallar.

Afghanistan was essentially, prior to the advent of Islam, a land of tribes. The Indo-Aryan inhabitants of the region including Pashayi and Nuristanis were known to be followers of Hinduism. Hinduism and Buddhism flourished in Afghanistan and the neighbouring region under the Kushan and Kidara empires of the 4th and 5th centuries as well. During their rule, a number of Shiva temples were not only built in Afghanistan but in other West and Central Asian regions too. Modern-day Uzbekistan and Tajikistan formed part of the Afghan kingdom in those times.

After the Kidarites, Afghanistan fell to the Alchon Huns, a nomadic people best known for establishing states in Central Asia and South Asia during the 4th and 6th centuries CE, and to whom the fall of classical India under the Gupta Empire is often attributed. The Alchon Huns are said to have taken over the land ruled over by the Kidarites in 370 CE. Modern-day Afghanistan’s Kandahar, known anciently as Gandhara, was taken over by the Hindu ruler King Khingila, who was, in fact, the most notable Alchon ruler. Towards the end of the 5th century, the Hindu Hunnics even took over Sindh, thus completing their rule over modern-day Afghanistan. The Alchon Huns were primarily practitioners of Hinduism and Buddhism, and King Khingila’s coins even bore the imprint of Shiva. The Alchon Huns ruled over Afghanistan roughly from 666 to 843 CE.

From 843 to 850 CE, a brahmin minister ruled the region. The Kalkaa community of Brahmins had acquired prominence in those times. They were later known as Kallers. It was here that the brahmin minister, Kallar set up the Hindu Shahi kingdom of Afghanistan. Several Hindu Shahi rulers helped take Hindu culture to new heights in Afghanistan. These were: Vakkadeva, Kamalavarman, Bhimadeva, Jayapaladeva (964 to 1001 CE), Anandapala (1001 to 1010 CE), Trilochanapala (1010 to 1021 CE) and Bhimpala (1021 to 1026 CE).

During the reign of Kamalavarman, the Saffarid rule weakened precipitately and ultimately Sistan became a part of the Samanid Empire. The Saffarid dynasty was a Sunni Persian dynasty from Sistan that ruled over parts of Greater Iran, with its capital at Zaranj, from 861 to 1003 CE. However, disorder prevailed for quite some time in the region, which the Hindu rulers used to their benefit. The Shahis stepped up activities on their western frontier. The result was the emergence of a Hindu power at Ghazni, supported by the Shahis.  While the first attacks for the capture of Ghazi came under the reign of Kamalavarman, power in the region was consolidated during the reign of his successor, Bhimadeva. 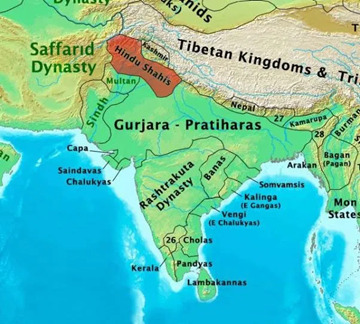 The Shahi state had successfully managed to ward off danger from the strong neighbouring kingdom of the Samanids for more than a century. That Muslim kingdom was gradually decaying, but its ambitious Turk officers were acquiring power and setting up personal fiefdoms, menacing the Hindu states south of Koh Hindu Kush. Bhimadeva, however, had no male successor. The Shahi kingdom was strong and prosperous but not easy to govern and protect. So, Bhimadeva selected the allied kingdom of Punjab to take over the Shahi kingdom in Afghanistan.

Thus followed the reign of Raja Jaypaladeva, who upon his coronation, used the additional name-suffix ‘Deva’ from his predecessor’s dynasty in addition to the ‘pala’ name-ending of his own family. Under Jaypaladeva’s reign, the Hindu Shahi kingdom was further strengthened since he maintained an aggressive and pro-active policy towards the Turks.

The Hindu Shahi reign continued till the 10th century. Like any dynasty and empire, with time, the power and influence of the Shahi kingdom began to wane, which provided the Mahmud of Ghazni with a perfect opportunity. The Persianate Turkic Ghaznavids finally broke through into India after overpowering the declining Hindu Shahis and Gurjaras. On 28 November 1001, Mahmud’s murderous army fought and defeated the army of Raja Jayapaladeva at the Battle of Peshawar. Jayapala killed himself and was succeeded by his son, Anandapala. The Shahi kingdom, however, was not able to survive much longer.