Hindus of Afghanistan: The genocide of the millennium

Taliban has taken control of Afghanistan and the minuscule minority populace of Sikhs and Hindus are packing their bags and fleeing the country from the savages. The minorities that have seen their population decline over 99 per cent in the last three decades might just vanish from the face of Afghanistan in the second innings of the ‘Moderate Taliban’ — as described by the terror outfit’s apologists.

However, the genocide of Hindus and Sikhs is solely not related to the Taliban. There were over 7 lakh Sikhs and Hindus in Afghanistan in 1970. There was no Taliban or even any theologically driven Islamist warlord back then. Yet, these minority Hindus and Sikhs faced a genocide, forcing them to be converted, killed or flee. Today, just about a few hundred Sikhs remain, and the number of Hindus in Afghanistan can be counted on the fingers.

There are reports of a population of 700,000 Hindus and Sikhs in Afghanistan in the 1970s. During the 1980s, estimates show a sharp decline to about 200,000-300,000. An investigation by TOLO news in 2016 reported “nearly 99% of Hindus, Sikhs left Afghanistan in the last three decades,” revealing that “Sikh and Hindu population dropped to 15,000 when the mujahideen was in power during the war in the 1990s and remained at that level during the Taliban regime.

It is now estimated that only 1350 Hindus and Sikhs remain in the country.” The numbers would have dipped even further in the last 5 years, given Taliban had started to expand its territories even with US troops in the country.

Thus it can be said with utmost certainty that even the supposed Islamic secular leaders of the country failed the Hindus. The hatred and xenophobia against the minority populace led to the decimation, much before the Taliban unleashed its reign of terror. The exodus was only exacerbated with the introduction of the Soviets and the subsequent Mujahideens that were mushroomed by none other than the USA.

Under the Mujahideen, there were widespread kidnappings, extortion, property grabbing incidents, religious persecution, targeting Sikhs and Hindus which became the trigger point for the exodus. After the Taliban took over Afghanistan, those who remained continued to face persecution.

Almost all politicians in the country are Muslims, with only one seat reserved for Hindus and Sikhs, combined. However, with the Taliban assuming the role of the judge, jury and the executioner, even that one seat has no relevance left.

As reported by TFI, the last Hindu priest of the country in Pt. Rajesh Kumar of the Rattan Nath temple in Kabul has decided to hold the fort despite the Talibanis encircling him and his religious belief. For Kumar, his loyalty and love for the Temple mean he is seeking no escape.

On his Twitter handle True Indology aka @BharadwajSpeaks shared the story of the Hindu priest, “Pandit Rajesh Kumar, the priest of Rattan Nath Temple in Kabul said: “Some Hindus have urged me to leave Kabul & offered to arrange for my travel and stay. But my ancestors served this Mandir for hundreds of years. I will not abandon it. If Taliban kills me, I consider it my Seva.”

Read More: ‘Let Taliban kill me,’ The last Hindu priest in the last Hindu temple of Afghanistan will not leave his temple

It is imperative to note that Hindu Temples are not registered as Temples in Taliban ruled Afghanistan. They are merely registered in the name of certain people and deemed as private property. And according to Sharia law, these structures can be demolished at any time.

"In Afghanistan, Hindu temples are not registered as temples.

They are registered in name of certain people
and deemed as private property.

As temple is liable to demolition in conformance with Sharia law"-

Under the Taliban-Sharia law of 1996-2000, the non-Muslims or kafirs were dictated to pray away from the gaze of Muslims and if caught, they were beaten and imprisoned. Similarly, if the kafirs tried to spread the preaching of their religion, they were executed. Under Taliban 2.0, the aforementioned rules are not expected to change dramatically either 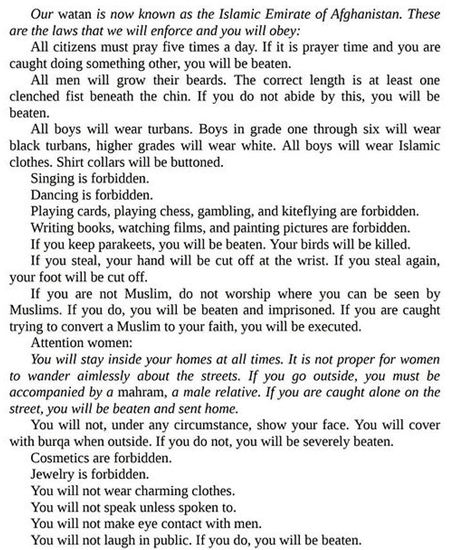 Amidst the scenario, an old video of a Pakistani ‘intellectual’, Zaid Hamid, is going viral on social media. In the video, Hamid is spouting hatred against Hindus in Afghanistan and calling for slaughtering them, during a panel discussion on a renowned Pakistani news channel. He says that too long a time has passed since they have slaughtered Hindus in Afghanistan.

Pakistan's plans for Hindus after US withdrawal from Afganistan. Live on Pak TV.

Afghanistan is not the only state where Hindus have been persecuted, Pakistan is on a similar slope. As reported by TFI, an eight-year-old Hindu boy was recently charged under the highly controversial and draconian blasphemy law in Pakistan for allegedly urinating on the carpet of a local Madrasa. The child could be staring at the death penalty as the country’s law warrants such a punishment.

However, because Hinduphobia and Hindu genocide is a figment of imagination according to the secular Islamoleftist cabal, the genocide of the millennium has been swept under the rug. One would rarely see any discussion happening about the drastic change in the demography of Afghanistan.

Thus, those asking for Muslim refugees to be granted shelter in India should respectably understand that we cannot skew our demography, for the problem runs deeper than the Taliban. The inherent flaws and tendency to look down upon the kafirs in Muslims is the reason Hindus have been wiped out of the Hindu Kush region. And given some time, the same can happen in India.