In the last seven years, the Modi government implemented many reforms and announced new policies to ensure the upliftment of the agricultural economy. From neam coated urea to PM-KISAN, collateral-free loans to agricultural reforms, to opening up the market – all these steps would ensure that Indian agriculture witnesses a golden decade, and the results are already visible with the exponential increase in agriculture exports.

However, there are few schemes that have not yet reached the scale and the target beneficiaries – Pradhan Mantri Fasal Bima Yojna is one of them. As per a report by The Hindu Business Line, which is based on the data presented by the government in Rajya Sabha on the Bima Yojna, the coverage under the insurance scheme is actually decreasing as many states and private insurance companies have opted out.

Under the Fasal Bima scheme, the farmers are expected to pay only 1 to 5 percent (varies on different crops) for the insurance while the rest of the amount is paid by the state government and central government equally. So far, seven states including Gujarat and Bihar have already opted out of the scheme. Bihar and West Bengal opted out in 2018 and 2019 respectively while Andhra Pradesh, Gujarat, Telangana, and Jharkhand did not implement the scheme in 2020. 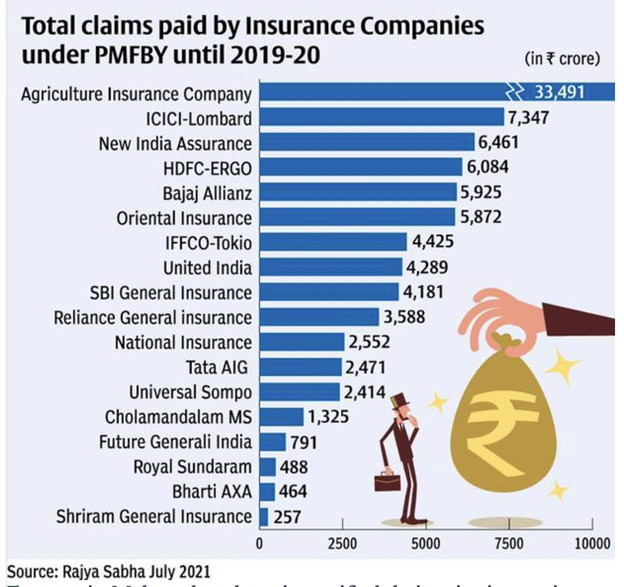 The blame game between the state government, union government, and insurance companies is going on. The insurance companies allege that they do not receive the state’s share of the premium on time, and this leads to delay in settling the claims. The unavailability of concrete data on the agriculture sector, lack of accounts details, and NEFT issues are some of the problems being faced on the ground. Moreover, many insurance companies exited from the Bima Yojna and alleged that they are making no profits in the scheme, so it is a waste of resources for them.

However, the numbers clearly tell that the beneficiaries and participants are not increasing at a rate that was expected. Committee on agriculture, examining the implementation of the scheme, had said, “As informed, the financial constraints of the state governments and low claim ratio during normal seasons are the major reasons for non-implementation of the Scheme by these States. Though most of the withdrawing States are implementing their own Scheme, the Committee is of the view that withdrawal or non-implementation of PMFBY by more States in subsequent years will defeat the very purpose for which the scheme was launched.”

The government must recognize these discrepancies and work to improve the claim ratio and profitability quotient of the scheme so that fasal bima can achieve near-universal coverage like in the case of Aadhar and bank accounts. This would ensure that whenever the environment is not supportive of agriculture, the farmers and their families do not get in financial distress.

Did a Frenzied mob of Muslims attack Swami Nareshanand after the Jantar Mantar protest?