Lower caste Hindus voted en masse for the BJP in West Bengal. But Media wants you to believe otherwise

In the last few decades, especially after the rise of Mandal politics, the left-liberal intellectual establishment is trying to prove just one thing – there is no subaltern Hindutva in India. The intellectual establishment argues this hypothesis again and again because its whole existence revolves around the argument that the lower castes in India do not support Hindutva, ideology of BJP and RSS.

Despite evidence that suggests the contrary – from the Ram Mandir movement in which a large number of leaders were from the OBC community to BJP’s support base since 2014 – the left-liberal establishment has kept this argument alive. In the West Bengal assembly election 2021, the huge support for BJP among the SC, ST and OBC (Hindu) community has once again started the debate on subaltern Hindutva with many researchers arguing that the politics of the state in the last few years shows that subaltern Hindutva has truly arrived.

However, the loss of the party in the assembly election has once again enabled the leftist media to peddle the same theory again. Shreyas Sardesai, a researcher with leftist electoral analysis organisation CSDS, argued that the support for BJP among the subaltern groups (as the leftists classify SC, ST and OBC community) is on decline in the article titled “West Bengal Assembly Elections | Subaltern Hindutva on the wane?”, published in the usual suspect, The Hindu.

The article is based on data collected by Lokniti-CSDS itself, and even according to that data, around 50 per cent of people among these groups supported BJP. However, the left-liberal establishment wants to push it down to your throat that the lower castes do not support Hindutva.

And this is not as if it started only after the election. Even before the election, the leftist establishment was arguing the same despite the evidence from the 2019 general election. Sourav Roy Barman and Pratim Ghosal, a journalist with The Indian Express and a researcher with the University of Oxford respectively, argued that upper castes, not the lower castes are the main support base of BJP in West Bengal in an article titled, “Why the BJP’s rise in Bengal cannot be attributed to ‘subaltern Hindutva”.

However, the results of the assembly election 2021 suggest the contrary and their contrast with the 2019 general election makes it very evident that BJP’s support among the subaltern groups has remained intact. 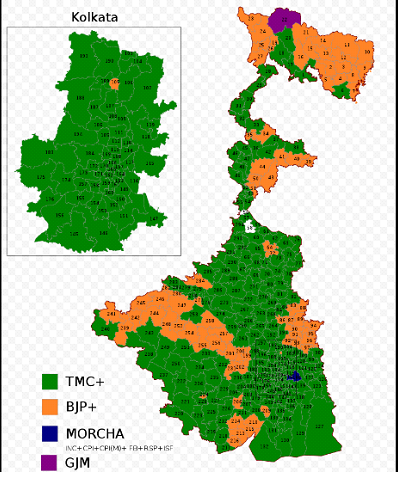 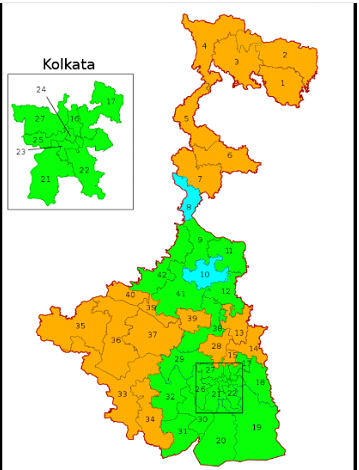 In the extreme Northern, Southern and Eastern part of the state, the party did well in the 2019 general election as well as the 2021 assembly election. These are the regions primarily inhabited by SCs, STs and the OBC population of the state. In Kolkata, the hub of Bhadrlok (Brahmin, Baidya, and Kayastha), the party had not won a single seat during the 2019 general election and won only one seat in the 2021 assembly election.

From the constituency-wise results, it is very clear which communities made BJP the opposition party in the state with 77 seats and 38 per cent of vote share. But, the leftist media does not want you to know that and is arguing to convince you otherwise.

Read More: West Bengal is the original ‘bimaru’ state of India but Bhadralok-controlled media doesn’t allow it to be a national narrative

Some hot-headed right-wingers on Twitter also claimed that subaltern Hindutva is “dead on arrival” on Twitter, without carefully examining the data.

BJP won 18 seats in West Bengal in the 2019 general election riding on votes of communities like Mahishyas, Tamus, Sahas, and Telis, Sadgops and Namsudras, who are classified among OBC and SC category. The support for the party among the ST community was also very high and this resulted in a clean sweep in the Western region of the state, where the ST, SC and OBCs are concentrated. And the same communities supported BJP in the 2021 assembly election, too.

So, subaltern Hindutva is not only intact in West Bengal but flourishing, and do not let left-liberal establishment convince you otherwise.

CBI begins probe against Mamata’s MLAs and Confidantes. Governor stands resolute in the face of opposition