If the results of Kerala elections follow the exit polls, it’s good news for the BJP as Congress is down and out

In the exit polls that were released yesterday evening, almost all the pollsters gave the Left Democratic Front (LDF) a full majority in the state of Kerala. This victory is historic for the Communist parties because, for the first time in the last five decades, a party would be reelected in the state of Kerala. In the last five decades, the CPM led LDF and Congress led UDF have ruled the state alternatively with no alliance getting a second term. 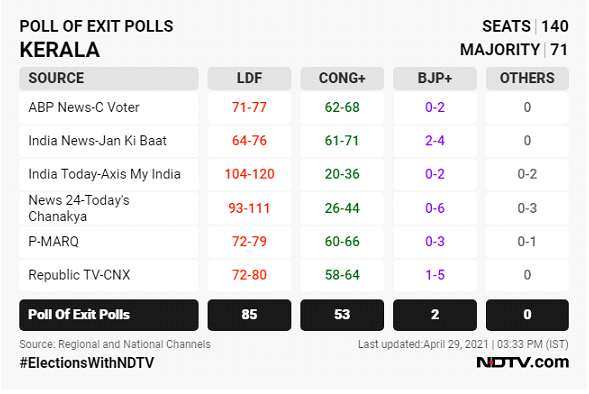 However, if the results corroborate with the exit polls, the Pinarayi Vijayan led Communist alliance is set to make history. This also means that the story of the Congress party is over in the state and soon it will become a junior partner of the Indian Union Muslim League.

The decline of Congress also means that there is a void that needs to be filled, and BJP will probably step out to uproot Congress as the major opposition, just as it did in many other states including West Bengal and Odisha that were being ruled by regional parties. The recent expansion of the BJP in the areas of the country where it has been an insignificant player historically has one thing in common. It has been eating out the Congress votes in those areas first and then trying to defeat the incumbent party. In states like Assam, West Bengal, Odisha, and Telangana, the growth of the party has followed the same pattern.

In the 2020 local body elections, the party tried to repeat the same in Kerala and succeeded to a large extent. In many gram panchayats and municipalities, BJP largely cut the Congress votes and the Congress registered one of its worst performances in the last few years and evidently, there was a substantial increase in BJP’s vote share and the number of seats. Though the real winner of BJP’s spectacular performance was the CPM-led Left Democratic Front (LDF), which won more than 60 per cent of the various seats in different bodies.

BJP’s rise in Kerala is on the similar lines of its expansion in West Bengal. In the state of West Bengal, BJP had a marginal presence with Left Front, Congress, and later TMC becoming the major players. However, in the last few years, BJP has gulped the vote bank of Congress and the Left Front to emerge as the major opposition against Mamata Banerjee led TMC.

Similarly in Kerala, BJP had a marginal presence before 2016 but the saffron party emerged as the third-largest party by a vote share with around 15 per cent votes, although it could win only one seat.

In the 2019 General Elections, the party could not win any seat but won 13 per cent of voters, emerging as the third-largest party in terms of vote share. However, in the 2020 local election, it has further consolidated its position in Kerala and dislodged the left and Congress from many constituencies.

Read More: Why Love Jihad is driving Christians of Kerala towards the BJP

Congress is even being abandoned by the Christian community of Kerala which, along with Muslims, was a major vote bank for the Congress-led United Democratic Front (UDF). The rising dominance of Muslims in Congress and UDF together forced the Christians to incline more towards the LDF and the BJP.

The minority appeasement policy of the UDF was a rallying point for the BJP, which tried to consolidate the Hindu vote by combining the Nair, Ezhava, Brahmin and the Scheduled Caste votes. Although, the BJP cannot bank much on minority voters, it certainly is targeting the upper caste Hindu base which has been so far splintered between Congress and the Left.