After facing a nation-wide backlash, a series of police cases in several states, and the creators of the web series ‘Tandav’ being dragged to the court, the OTT streaming platform Amazon Prime Video, tendered an apology to its Indian viewers for hurting their religious sentiments in its recently released political drama series.

Issuing an apology, Amazon Prime Video apologised “unconditionally to anyone who felt hurt,” while promising that it will continue to bring content with the utmost care and respecting religious sensitivity. The statement articulates, “Amazon Prime Video again deeply regrets that viewers considered certain scenes objectionable. Hurting religious sentiments was never our intention, and the objectionable scene had been removed. We respect our viewers’ cultural beliefs and apologise unconditionally.” 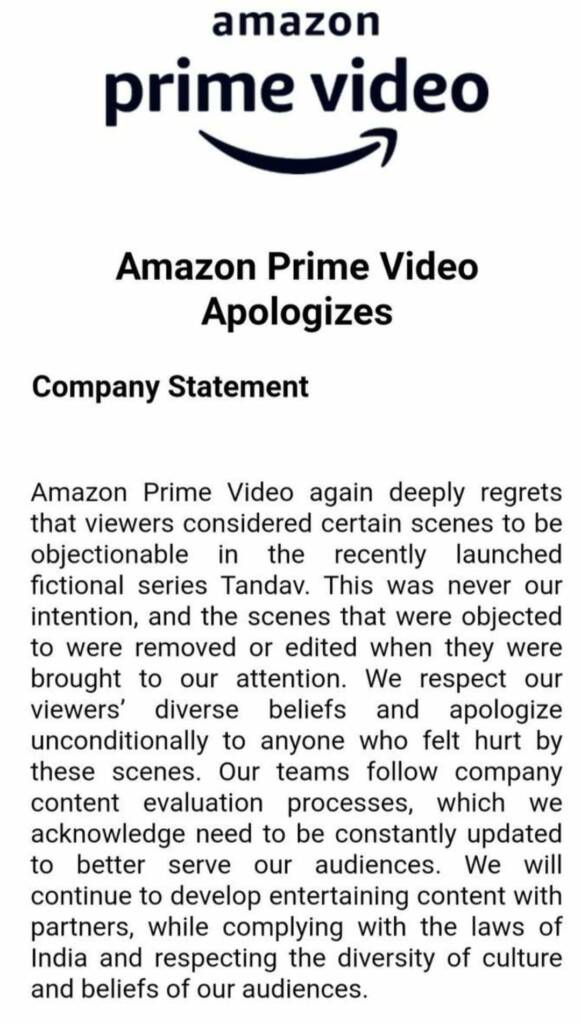 Before Amazon’s official statement, the director and creator of Tandav, Ali Abbas Zafar came out with a formal apology on Twitter. His statement read, “Tandav is a fictional work and any resemblance to reality is purely coincidental. The cast and crew never had any intentions to hurt religious beliefs or insult any institution. The team of ‘Tandav’ respects the concern of the public and offers an unconditional apology.”

Amazon Prime Video’s ‘Tandav’ is not the first web series to land in such controversy but before that various web shows fell into similar religious controversies. Shows such as ‘Tandav’, ‘A Suitable Boy’, ‘Sacred Games’, and others had been hurting religious beliefs every time and again.

To rein such Hindu-phobic web content, the Information Technology Ministry issued the guidelines (Intermediary Guidelines and Digital Media Ethics Code, 2021). The rules drafted in the guidelines specifically holds the grip on the content airing on OTT platforms like Netflix and Amazon Prime and social media platforms like Facebook, Twitter and WhatsApp.

As anticipated by TFI, after the statement of IT Minister Ravi Shankar Prasad, rules will soon be drafted to counter the menace and Hindu-phobia on the OTT platform. With a clear conscience, TFI pointed out that the OTT platforms like Amazon Prime and Netflix are fast-becoming a growing breeding ground for anti-Hindu content and they are determined to defame the cultural identity of India.

Besides criticism from the public and Supreme court, the OTT giant also cared about its business in India which accounts for roughly 6.5 billion US dollars ( approximately Rs.47,610 crores). In January 2020, Jeff Bezos, Amazon founder in an event in Mumbai said, “Business in India is better than the rest part of the world”.

Maharashtra minister, allegedly responsible for the suicide of 22-year-old social media sensation, is being protected by Uddhav