After pop star, Rihanna was paid over $2.5 million to tweet against the farm laws to internationalise the farmers’ protests, a group of Indian-American Sikhs created an ad to be played before the Superbowl LV — America’s most-watched sporting event. According to news reports, Indian-American banker Raj Sodhi-Layne and her friends put together the 30-second ad which was aired on CBS in Fresno County, right before the championship game of the NFL.

The commercial begins with a quote from Martin Luther King: ‘Injustice anywhere is a threat to justice everywhere.’ Images from the farmers’ tractor parade and their border camps are overlaid with text alleging human rights violations against the ones in the farmers’ protests. “No Farmers, No Food, No Future” flashes on the screen. It includes a message from Fresno Mayor Jerry Dyer. “We want you to know, our brothers and sisters in India, that we stand with you,” he says.

According to a report by Fresnobee, Fresno Mayor Jerry Dyer and U.S. Rep. Jim Costa have widely supported the farmers’ protests in India and have expressed their concern over the farm laws, much like the likes of Greta Thunberg, Rihanna, and Mia Khalifa.

While the ad was played in the small county of Fresno, the sympathisers of the fake farmers’ protests in the country tried to portray that the ad was played on the national television. It is imperative to note that a 30-second ad at Superbowl required capital in excess of $5.5 million.

We meant it when we said the whole world is watching ✊🏾.pic.twitter.com/5Jq8j2hq8w

According to an Indian Express report, Raj set up a page on crowdfunding platform ‘GoFundMe’ and raised $11,123 within a day to pay to CBS for the slot. The ad was produced by local artist and producer Shar Singh of Teji Videos and only played to a limited audience in the Fresno county only. However, delving a bit deeper, one can find that it was not merely a crowdfunding campaign that sponsored the ad. Raj Sodhi Layne shared a Facebook post in which it is mentioned that the Central Valley Sikh community funded the entire campaign. 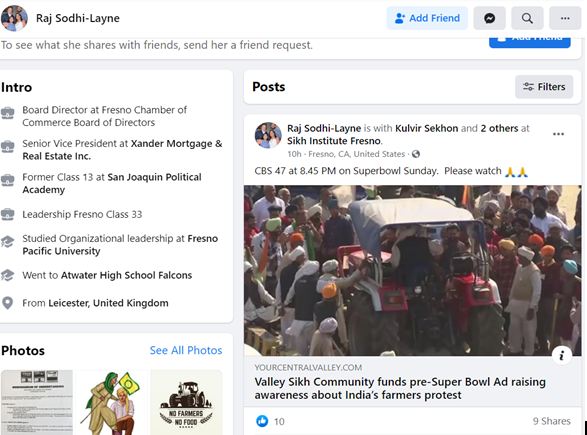 Moreover, Raj’s location in the post is set to ‘Sikh Institute Fresno’ (SIF) and the article also quotes one Gurpreet Mann who seems highly critical of the three farm laws. But what makes things interesting is the fact that SIF clearly mentions George Soros’s Open Society Foundations as one of the donors. And there is no need to explain what the implications are when a certain George Soros or his dubious ‘philanthropic’ organisations have come out in support of the fake farmers’ protests.

It can be entirely plausible that the entire ad-campaign was funded by Soros’s foundation and that the crowdfunding campaign was merely a façade to hide the reality of it supporting the farmers’ protests.

Reported extensively by TFI, Soros’s Open Society Foundations has an endowment of more than 19 billion dollars and in the last three decades, his organisation has made every effort to weaken the nationalist values around the world. With Trump already gone, Soros has his eyes set on PM Narendra Modi who has emerged as the biggest nationalist leader in the world.

Moreover, such a massive campaign to support the farmers’ protests in India at the Superbowl wouldn’t have been possible without the support of big American politicians like Jerry Dyer and Jim Costa.

In an attempt to internationalise the fake farmers’ protests and bring eyeballs to the Khalistani movement, the entire rendezvous seems orchestrated. The left-liberal cabal is galvanising everything in its arsenal to destabilise the country and manufacture another round of riots, violence, and arson. The Toolkit episode has already exposed the notorious plans of the lobby and it appears that the Superbowl ad was a part of the broader conspiracy as well.

Lookie! Twitter – the biggest bully of the internet is crying because the fear of the Modi government is real

PM Modi tears up, Ghulam Nabi Azad attacks his own party in his farewell speech in Parliament