Rahul Gandhi knows there is no hope for Congress in Bihar. He is just happy with burning effigies of PM Modi

Rahul Gandhi, the scion of Gandhi dynasty who can not win a single state for the Congress party is now celebrating the effigy burning of the Prime Minister in the Congress-ruled state of Punjab. In an election rally in Bihar, Rahul Gandhi said that generally the effigy of Ravana and Meghnad is burnt but the farmers of Punjab are burning effigies of the Prime Minister and his friends in the corporate world, although he failed to mention that shameful deed was carried out by the Congress workers on the behest of Amarinder Singh government.

This happened all over Punjab yesterday. It’s sad that Punjab is feeling such anger towards PM.

This is a very dangerous precedent and is bad for our country.

PM should reach out, listen and give a healing touch quickly. pic.twitter.com/XvH6f7Vtht

In the state of Bihar, loss of Mahagathbandhan, which constitutes RJD, Congress and a few smaller parties, looks imminent. But instead of working for the revival of the party or the alliance, the good for nothing dynast is happy over effigy burning of the Prime Minister.

The terminal decline of the Congress party in Bihar is evident as its vote share has reduced to a single digit. Rahul Gandhi has been active in party politics since 2004 but has not made a single effort so far for the revival of the party and is happy to play second fiddle to Lalu Yadav and now to even Tejashwi Yadav. 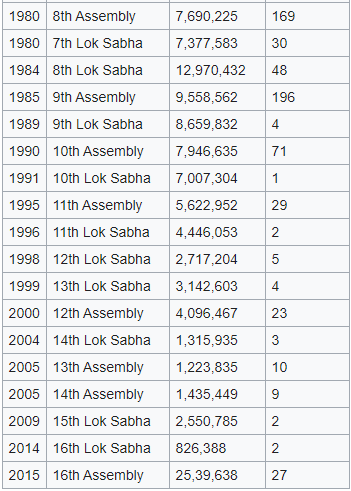 The decline of the Congress party in Bihar is evident in the picture above. In 2015, when it was a part of the Mahagathbandhan, the party has been able to reach a respectable figure of 27 out of 243, otherwise, it remained in single digit- in terms of the number of seats as well as vote percentage- in assembly as well as general elections.

Rahul Gandhi’s entry into politics in 2004 made no difference in the party’s stature in Bihar because he has no belly to fight. He humbly accepted second fiddle to Lalu Yadav and ignored the rampant corruption, Gunda Raj which led to the defeat of RJD in 2005- a few months after his entry into politics. Now, after his unsuccessful tenure of one and a half decades into electoral politics, all he is happy about is effigy burning of Prime Minister Modi.

“The Rahul Gandhi-directed drama of burning PM’s effigy in Punjab is shameful but not unexpected. After all, the Nehru-Gandhi dynasty has never respected the office of the PM. This was seen in the institutional weakening of the PM’s authority during the UPA years of 2004-2014,” said BJP President JP Nadda.

“One dynasty’s deep personal hatred against a person who was born in poverty and became PM is historic. Equally historic is the love people of India have showered upon PM @narendramodi. More Congress’ lies and hate increases, the more people will support PM Modi!,” he added.

There is a very low probability of Mahagathbandhan’s success given the ineffective leadership it has and NDA will sail through in the elections despite ineffective leadership of Nitish Kumar.  With Lalu Yadav in jail and Lalu’s sons proving as ineffective as Rahul Gandhi, it basically marks the end of Mahagathbandhan. It is very unlikely that the Mahagathbandhan will win even 10 per cent seats (required to win the seat of Leader of opposition) in the 243 members’ strong Bihar legislative assembly. RJD, the party which ruled the state with an iron fist for 15 years (and destroyed its legacy) will no longer be a significant player after the next assembly election, and Congress is already virtually dead.

The kind of politics Rahul Gandhi is doing- of effigy burning of the Prime Minister of the country- will ensure the loss of Congress not only in Bihar but in all other assembly elections and general elections to come.

‘Tejashwi is not getting my support at all,’ Chirag Paswan rubbishes Yadav scion’s claims about him