by TFIPOST News Desk
in TFIUvaach
1

As informed earlier, on the occasion of the 70th birthday of Prime Minister Shri Narendra Modi, Shri SA Ramdass ji, MLA from KR Legislative Assembly, Mysore, pioneered a citizen engagement drive called ‘Age of Ideas’. Hon’ble Prime Minister, Shri Narendra Modi has initiated many policies and schemes in the public interest which have brought positive changes in the lives of crores of people. But there is no such plan that does not have a place for improvement and citizens are invited to participate in this drive and the government will assess the received suggestions.

Age of Ideas: Selection of winners

A jury of 10 members consisting of intellectuals from varying fields will select the ten best ideas out of all the ideas that came out of this drive, which runs till 31 October. And your very own TFI will bring to you all the updates of this drive through its social media pages.

Age of Ideas: Meet the Jury 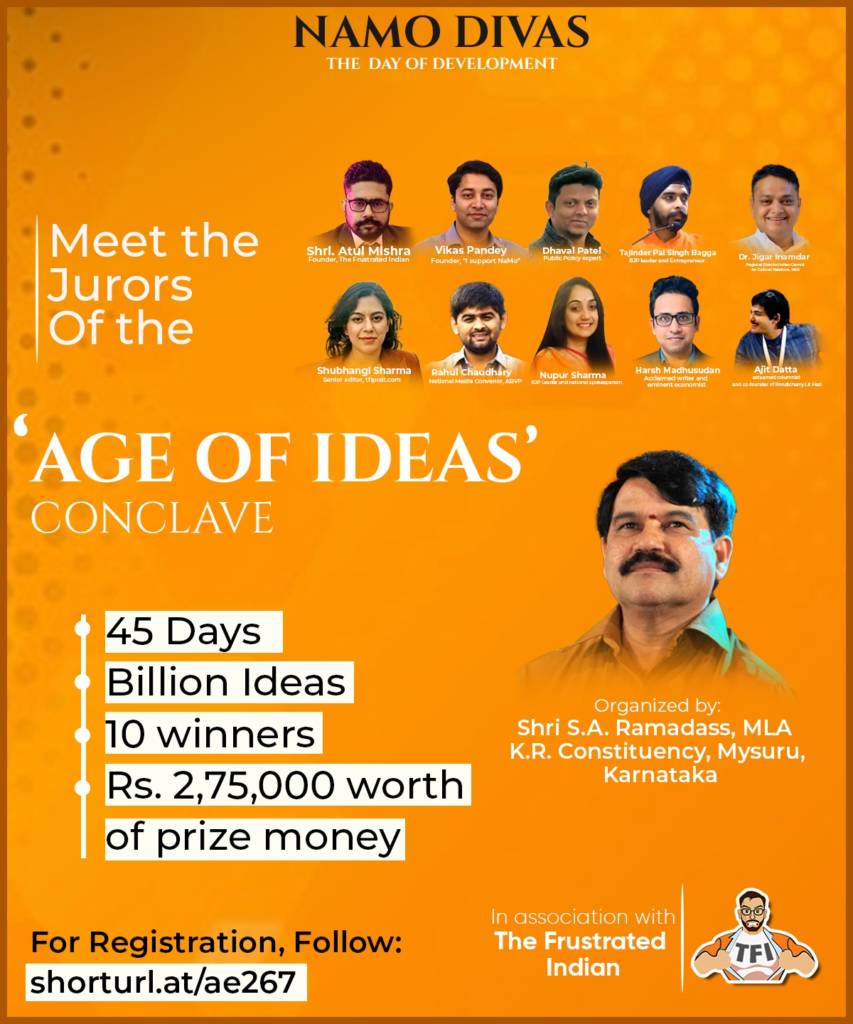 If you have been to Twitter and don’t know Tajinder Pal Singh Bagga then you haven’t been using Twitter properly. Often found mercilessly destroying his detractors on Twitter, Tajinder Bagga is a brilliant man, a satirist, an AOLite and an entrepreneur whose quirky, patriotic T-shirts took the internet by storm. Tajinder Bagga also contested the Delhi Assembly elections on a BJP ticket.

Nupur Sharma is an LSE grad, a lawyer and a born politician. She was the President of the Delhi University Student’s Union (DUSU) on the ticket of Akhil Bharatiya Vidyarthi Parishad (ABVP). She was chosen by the BJP to contest from the New Delhi Assembly constituency as a BJP candidate against former Chief Minister and Aam Aadmi Party (AAP) chief Arvind Kejriwal in the 2015 Delhi Assembly elections. In 2015, she was was appointed as the national spokesperson by the BJP.

Harsh Gupta ‘Madhusudan’ is a public markets investor who believes that the 2020s will be the “Long India” decade. He earlier worked for Bain & Co. in London and Houston focusing on due diligence for private equity and hedge fund clients amongst other cases. He is an INSEAD MBA and Dartmouth College alumnus (Economics major). Also a CFA® charter holder, Certified FRM, and IIT Delhi dropout.

Dr. Jigar Inamdar is the Regional Director of the Indian Council for Cultural Relations, Ministry of External Affairs, Government of India. He is a Member of the Senate at The Maharaja Sayajirao University, Baroda. Dr. Inamdar holds a Ph.D. in Public Administration. A public speaker and an innovator, Dr. Inamdar is also the recipient of the prestigious ASEAN-India Youth Award.

Ajit Datta is an internationally acclaimed Columnist and the co-founder of Republic Pondicherry Literature Festival. Ajit is also a consulting Editor at tfipost.com (previously rightlog.in). Across the world, Ajit is known for his incisive and sharp takes on political topics. Ajit is also known for his firebrand tweets. He is of the youngest columnists in India to shoot to international acclaim.

Shubhangi Sharma is a columnist and senior editor at tfipost.com. She would have been a scientist had she not been deeply passionate about geopolitics, economy, and national policy. Moving forward, she is dedicated towards projecting a fairer picture of an aspirational, young yet mature India to the global audience. Shubhangi is well known for her sharp articles and pointy tweets on matters of national and international importance.

Dhaval Patel is a project management consultant based out of Mumbai with an active interest in politics and public policy. His columns on politics and public policy have featured in top news portals of the country and he remains a voice of reason in times of pointless rants and twitter fights. He actively uses Twitter to slay the misinformation demon and present data and facts as they are.

Rahul Chaudhary is a Research Scholar at the National Law University, Lucknow and the National Media Convenor of the Akhil Bhartiya Vidyarthi Parishad. Rahul is an acclaimed columnist with a special interest in policymaking. Rahul is also a motivational speaker.

Atul Mishra, Founder and CEO of TFI Media (The Frustrated Indian), is man on a mission, who singlehandedly scripted the revival of Indian right on social media. The Frustrated Indian was the first page of its kind in India and soon many more pages like it were born. Today, Atul is considered an authority in Indian politics and has been a part of many newsroom debates. Under his leadership, TFI became a household name and one of India’s most loved content websites.

See you at the Age of Ideas conclave! CLICK HERE TO PARTICIPATE IN THE AGE OF IDEAS CONCLAVE AND WIN CASH PRIZE UPTO Rs. 50,000

Imran Khan is now truly scared of a Saudi backed military coup in Pakistan, his anti-army statements prove that