by Akshay Narang
in Opinions
1

Amidst the Coronavirus Pandemic, countries around the world have been seeking India’s help, particularly in the form of Hydroxychloroquine (HCQ) tablets in bolstering their battle against the novel infection. India too has risen to the occasion supplying the crucial medicine believed to be effective in reducing the viral load in COVID-19 patients.

Now, India has given 2,00,000 HCQ tablets to Myanmar, apart from other medical supplies such as surgical gloves, body bags, minor surgical sets and thermal scanners. In a move that is bound to significantly improve the strategic Indo-Myanmar bilateral ties.

The Embassy of India in Yangon, Myanmar tweeted, “On behalf of the Government of India @AmbSaurabhKumar handed over medical equipment, medicines, and other supplies to the Ministry of Health and Sports at Yangon Airport to support Myanmar’s Healthcare System.”

🇮🇳 India Myanmar 🇲🇲
|| Together We Fight
Against #COVID19 ||
On behalf of the Government of India @AmbSaurabhKumar handed over medical equipment, medicines, and other supplies to the Ministry of Health and Sports at Yangon Airport to support Myanmar’s Healthcare System. pic.twitter.com/K2dMyZZ5ka

In a Press Release, the Embassy also stated, “The Government of India stands in solidarity with the people and the government of Myanmar in the wake of the outbreak of COVID-19 pandemic.”

India’s initiative should be certainly seen in lights of the strategic ties between Naypyitaw and New Delhi. The fact remains that the strategically located country of Myanmar is crucial for India in terms of connectivity with India’s own Northeast, Modi government’s Act East Policy and also for countering Chinese influence.

Warm ties with Myanmar are the key to India’s strategic hold over the Northeast and also for augmenting its influence amongst the ASEAN countries.

Historically, India and Myanmar share strong relations- Myanmar (Burma) was a part of British India till 1937, and it was partitioned just a decade before the two countries gained independence in quick succession of each other.

At a cultural level, Myanmar happens to be a Buddhist-majority country and share cultural ties on the foundations of the Indic religion.

In the later years, State Counsellor Aung San Suu Kyi’s father, Aung San too shared cordial relations with India’s top political leadership. The incumbent State Counsellor herself has a strong India connection- she studied Political Science at the Lady Shri Ram College of the Delhi University and graduated in the year 1964.

At a strategic level, Indo-Myanmar relations are crucial to India given Myanmar’s location in the region, especially in the context of the Kaladan Multi-Modal Transit Transport Project- one of the most ambitious multi-modal transport projects initiated by India. 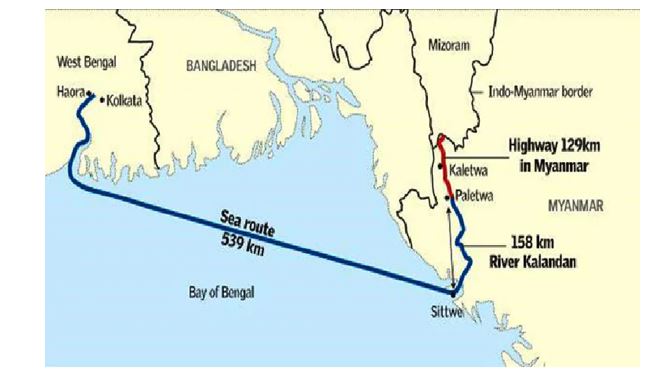 The project, originally envisaged in 2003 and started in 2010 is crucial for India from several viewpoints- most importantly laying the foundation for cheaper and faster means for New Delhi to connect to its own Northeast. Currently, India faces logistical issues in land transport via the narrow Siliguri Corridor or the Chicken’s Neck, a 22-kilometre narrow stretch of land which connects the northeast with the rest of India and is crucial for the country’s security.

This land stretch is both narrow and susceptible to Chinese aggression that can hamper India’s connectivity to its own Northeast. Secondly, the Northeast doesn’t have any port connectivity and has only two options to reach a nearby port- neighbouring countries of Bangladesh and Myanmar.

Bangladesh has not been very forthcoming in India’s ambitions of a massive transport network connecting the North-eastern states to a Bangladeshi port, and this is how the Kaladan Multi-Modal Transit Transport Project came into being.

The project aims to connect India’s Haldia port near Kolkata with the Sittwe port in Myanmar that India has developed as a part of the Transit Transport project. This 539-kilometre Sea Link will enable maritime connectivity between the two countries. The second component of the project is the 158-kilometre long Kaladan river connectivity between Sittwe seaport and Paletwa as a part of this ambitious project.

Finally, a 129-kilometre long highway will come up that will connect the Burmese towns of Paletwa and Kaletwa. Kaletwa is situated very close to the Indian state of Mizoram and this is how India will be able to supply cargo and other heavy equipment for developmental projects that would be needed in the state and the rest of the Northeast.

Through this project, India plans on augmenting its capacities that can be supplied to the Northeast, since ship and river transport are more effective forms of transportation than land transport- especially in the case of hilly and densely forested Northeast whose only form of connectivity with mainland India is a 22-kilometre narrow stretch of land.

This will also help India in reaching the isolated North-eastern areas faster than before, as the travel distance is going to come down drastically with the coming up of this project. Consider this, the present distance between Haldia project in Kolkata and Lawngtlai in Mizoram via the Chicken’s Neck corridor is 1,880 kilometres.

But the distance between the two locations will come down to 930 kilometres once the entire project becomes operational and therefore India will directly slice off around 1,000 kilometres when it comes to reaching the strategical areas in the Northeast. 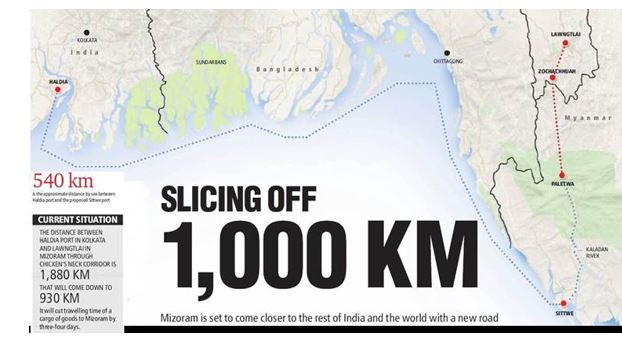 In the year 2018, Rajya Sabha member and Union Minister of State for Shipping had informed the House that the “infrastructure at Sittwe Port in Myanmar, constructed with India’s assistance, is ready for operation.”

Myanmar has been cooperating with India in joint operations to destroy the terror camps operated by the Arakan Army on the Indo-Myanmar border who pose a possible threat to the ambitious Multi-Modal Transit Transport Project. In fact, India and Myanmar share a good deal of security cooperation and the Armies of the two countries have also worked together in striking the NSCN-K (National Socialist Council of Nagaland-Khaplang) camps within Myanmar.

While the Kaladan Multi-Modal Transit Transport Project is still in progress, New Delhi also plans to build a Special Economic Zone (SEZ) near the Sittwe port in order to counter China’s plans of building Kyaukphyu SEZ in Myanmar- which will be situated very close to the Sittwe SEZ. Despite massive investment from Beijing, Myanmar remains wary of overdependence on China and wants to maintain close ties with both India and the United States, which is why New Delhi must keep investing in the neighbouring country.

Both Myanmar and the Transit Transport Project are crucial to India’s ambitions of rampant industrialisation in the North-east as the region is situated very close to Southeast Asia and opens up the possibility of capitalising upon Modi government’s ‘Act East Policy’.

Transport networks into from Northeast India further East into the outer world is a part of the ‘Act East Policy’ and Myanmar is India’s gateway into Southeast Asian countries, which also explains why India did not make a huge issue out of Rohingya influx into India due to ethnic conflicts within Myanmar. It was a part of the strategy to maintain close ties with Naypyitaw.

In this context, New Delhi has made rapid strides in its bilateral relations with Myanmar by giving it HCQ tablets, along with other medical supplies in order to bolster the country’s battle against COVID-19, a disease that actually originated in China and at least symbolically differentiates between the kinds of influence that New Delhi and Beijing have.

More than 20,000 cases in Russia in just 2 days: After months of hiding its Coronavirus cases, the truth is finally out

After Sterlite closure, Pakistan’s copper exports have risen by 400%. The anti-nationals have officially won