No Result
View All Result
Newswire
Mayor asks New Yorkers to stay home for holidays to protect against COVID-19 2 hours ago
Indian-origin New York cop called hero for disarming alleged killer while off-duty 4 hours ago
Why Rashid is one of the toughest bowlers to hit in T20 4 hours ago
2 terrorists killed in Budgam encounter 4 hours ago
We lost the match in the powerplay itself: Iyer 4 hours ago
Hyderabad stay afloat after Rashid, Saha star in win (Lead) 5 hours ago
Next
Prev

The CCP regime in China continues to use its influence in the Universities of democratic countries across the world for furthering its influence and bolstering its propaganda war in the free world. The latest University to come under the scanner for throwing its doors open to Chinese influence is the Oxford University in England.

According to The Guardian, an Oxford academic head, Alan Hudson, bestowed a “meaningless” University qualification upon a Hong Kong businessman, Chan King Wai, with Chinese Communist Party (CCP) links at a high-profile ceremony in Shanghai last year. The “meaningless” qualification has now raised concerns of increasing Chinese influence in the British University campuses. 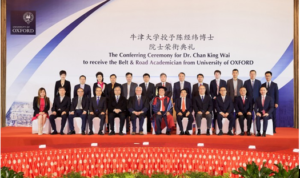 Hudson awarded the title “Belt and Road Academician from Oxford University” that itself suggests that Wai has been a major contributor to Xi Jinping’s flagship Belt and Road Initiative (BRI). Oxford University gives out only a few such honorary degrees at the Encaenia ceremony every year. Therefore, the qualification bestowed upon Wai was an important development. 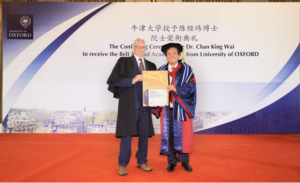 Hudson, who has now retired from Oxford University, has confessed that the title given to Wai is “meaningless”. He said, “I looked up the meaning of ‘academician’ and it is absolutely meaningless, it means anybody involved with the university, of any description. So I said there you go, we can put that on the certificate. In recognition of his contributions to the programme.”

But why would the Oxford University– the oldest English-speaking University in the world– hand out an “absolutely meaningless” qualification?

Hudson seems to have an answer to this. He said, “The incentive for this was a potential donation to the university or the department, and for a number of programmes.”

He further added, “I was contacted by the Hong Kong development office [of Oxford University] who wanted to approach Chan King Wai … from the point of view of a substantial donation to the university.”

Interestingly, Chan, who was born in mainland China but later migrated to Hong Kong where he built his fortune and set up a conglomerate called the Hong Kong King Wai Group, has deep CCP links according to Benedict Rogers, co-founder and chair of the campaign group Hong Kong Watch. Rogers said, “This sorry episode is yet another example of the growing influence the Chinese Communist Party has in our leading academic institutions, which remains largely uncontested and free from scrutiny.

He is the Deputy Director of the National Economic Committee of the 12th CPPCC (Chinese People’s Political Consultative Conference) – an advisory body to the National People’s Congress- China’s highest law-making body.

Moreover, Chan is also the Vice-Chairman of the 11th All-China National Federation of Industry and Commerce that also has ties with the CCP. Besides, last year it was reported that the King Wai Group was the first and only Hong Kong-based company to provide insurance cover to the Belt and Road Initiative (BRI) projects that serve as critical tools in Xi Jinping’s “debt trap” diplomacy.

Chan is also a part of the council of several Chinese universities, which is why the qualification handed out to Chan, is a real cause of concern.

But the UK is certainly not the only democratic country facing this serious issue. Australia and the United States with a high concentration of Chinese students are facing similar issues. Australian Universities happen to have a track record of succumbing to Chinese influence. Take the example of Drew Pavlou, a student activist who organised an on-campus pro-Hong Kong rally and was also a critic of the Queensland’s University. Recently, he was suspended by the University for two years.

Chinese student groups have been a strong influence on University campuses in Australia. Last year, there were reports of pro-mainland China students clashing with pro-Hong Kong protesters on campuses.

These Chinese nationals in Australia have the backing of the Communist Party of China (CCP), and China’s Foreign Ministry has explicitly backed these Chinese students running amok in Australia and violently censoring pro-Hong Kong voices down under.

In the US, on the other hand, Confucius Institutes- Chinese State-run language and cultural schools have become a major issue. Last year, a report by an investigation arm of the Senate Homeland Security and Governmental Affairs Committee revealed that Hanban, which oversees these Chinese language and culture Institutes on campuses all over the world, had sent in US$15.4 million into the United States directly.

The Confucius Institutes are infamous for censorship on sensitive topics like Tibet, Xinjiang, and Taiwan, and are therefore seen as parts of the Chinese propaganda war. Moreover, premier American Universities, including Harvard and Yale, are also facing US Education Department investigation into allegations of failing to report “hundreds of millions of dollars in foreign gifts and contracts” from China and other countries.

Within the US, concerns about China using its “soft power” to influence academia and steal American Intellectual Property (IP) have grown significantly over the recent past. Beijing has a lot to gain out of towering influence in the academia and Universities of the Western and free world. Democratic countries must, therefore, find a way out of financial dependence on Chinese students, or else Beijing will start eroding some of the oldest and most reputed institutions in the free world.

As a believer in PM Modi, I am disgusted to see Shahzad Ali being inducted into the party