Newswire
New Supreme Court ruling on abortion ‘possible’: Trump 1 hour ago
Armenia, Azerbaijan erupt into fight over disputed region 3 hours ago
What we saw from Tewatia in nets is what we saw in Cottrell’s over: Smith 4 hours ago
Investment experts project positive turnaround for ITC stock 5 hours ago
India is Bangladesh’s loyal friend, closest neighbour: Abdul Hamid 5 hours ago
Samson and Tewatia steal the show in grand style 5 hours ago
Next
Prev

For the last few decades, there was a global consensus on the importance of free trade for economic development. The free traders argued that it benefits both manufacturers, as well as the consumer as the cost of the production goes down due to manufacturing in countries with cheap labour and the overall cost of the product also goes down, which benefits the consumer. The center-left as well as center-right parties aggressively pursued multilateral free trade deals (FTAs) and showcased this as their achievement.

But, in the last few years, especially after Trump came to power in the United States and the subsequent rise of protectionist leaders across the world, the global consensus on free trade has broken.

The section of the society which was pushed towards the edge due to unchecked globalization and free trade has become assertive in the last few years, and this is leading the rise of protectionism across the globe.

The era of free trade benefitted only a few countries very disproportionately. Countries like China, Germany, Ireland, South Korea, Italy, and Taiwan established themselves as export powerhouses, despite very little natural resources like oil, gas, and minerals at their disposal for exporting.

As per the 2017 data from CIA World Factbook, China enjoys the highest trade surplus with a net export of 426 billion dollars. China is followed by Germany which has net export worth 297 billion dollars. The other countries in the list which enjoy large trade surpluses without any significant natural resource export are South Korea, Italy, and Taiwan.

Countries at the receiving end of the list are those left behind in the export race and run large current account deficits in order to purchase goods from trade surplus nations are United States, United Kingdom, India, France, Turkey, Spain, Philippines, Egypt, and Pakistan.

The three largest nations, US, UK, and India, alone run a trade deficit of more than 1 trillion dollars, which benefits exporting nations like China and Germany. The United States, which finances its high trade deficit every year by printing more dollars and benefits by having the world’s pre-eminent reserve currency, alone ran a deficit of 776 billion dollars, around half of which was with China alone, standing at 337 billion dollars, thus making China rich, very rich.

Since Trump came to power, the American government has increased tariffs exponentially on Chinese imports, to bring down the trade deficit. Trump administration also signed the first phase of the US-China trade deal, in which China agreed to purchase more American made goods to bridge the deficit.

China enjoys a trade surplus of above 50 billion dollars with India, too. The surplus had ballooned to 63 billion dollars in FY 18, when the Indian trade minister told a Chinese minister that they have to purchase more goods from India, as such a high trade deficit is not acceptable.

India increases tariffs on many Chinese goods- for which the dragon was using India as a dumping ground- to make domestically produced goods more competitive. And China has also increased the import of Indian goods, fearing further backlash by the Indian government.

India’s trade deficit has come down in the last two years by around 15 billion dollars. Similarly, with Trump’s tariffs and the trade deal with China where China commits to buying more from the US, America’s trade deficit with China is expected to come down in subsequent years, although it increased in the last two years despite the imposition of tariffs. 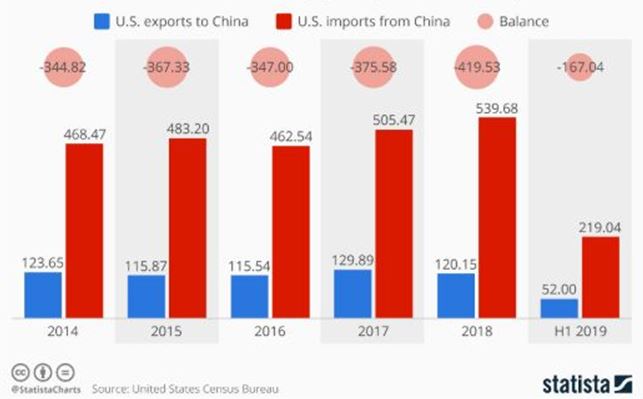 The problem of trade deficits is not limited to China only; many other countries including India also face issues with many trade partners. For example, India enjoys a significant trade surplus with the United States, and Trump has imposed new tariffs and threatened to increase them if India does not take steps to bridge the deficits. India responded by increasing the import of American shale oil to bridge the deficit.

With the rising protectionism, the era of enjoying a very high trade surplus is over. And this is not good news for countries like China, which became rich within a year by becoming an export powerhouse. In the next few years, countries around the world would align their exports and imports- which means that they will import goods and services from other countries only to closely match the amount for which they can export to that particular country. The countries which depend on exports rather than domestic consumption do not have a very bright future in the protectionist world.