Newswire
Nithya Menen: Important for me to do films that stand the test of time 1 hour ago
Thai PM hints at cabinet reshuffle after budget debate 2 hours ago
Turkish FM urges for withdrawal of Haftar forces in Libya 2 hours ago
US stocks end mixed as Covid-19 uncertainty weighs 2 hours ago
Ayushmann Khurrana: I choose films that have no reference points 2 hours ago
‘Hanna’ gets greenlit for third season 2 hours ago
Next
Prev

How afraid should India be? The most comprehensive analysis of COVID-19 on the Internet

It has been almost two and a half months since the government implemented a harsh lockdown under the National Disaster Management Act to control the Coronavirus outbreak in India. As lockdown 4.0 nears the end and it is being anticipated that the Indian government would open up the economic activities, at the least green and orange zones, it is important to analyse the situation on various important metrics.

The government has aggressively pushed to increase the frequency of testing in order to “remain ahead of the virus”. The number of COVID-19 testing labs was numbered just 13 in the first week of February- centered in cities and research labs- but it has now reached 609, as per the latest figures. 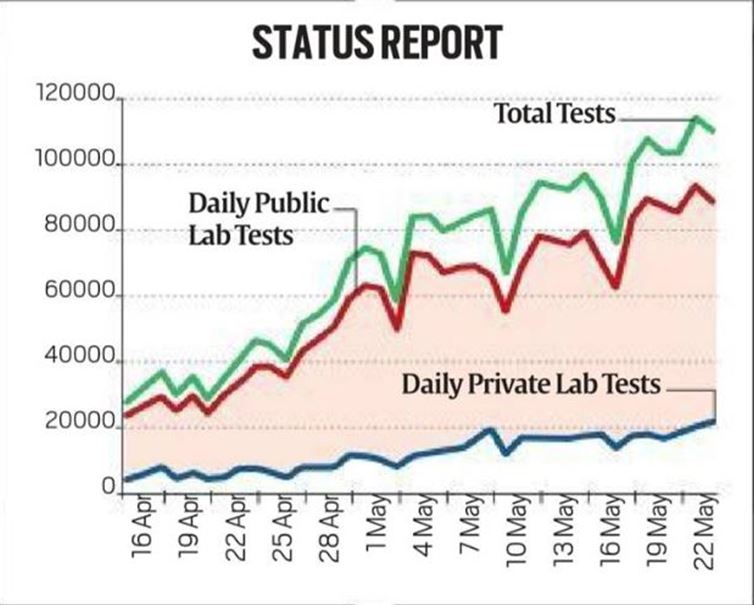 The testing numbers increased from a few thousand to around 1.5 lakh and is heading towards 2 lakhs per day. The government said that soon 2 lakh people will be tested per day. So, as far as testing is concerned, the government of India is putting full efforts to test as many people as possible.

The major cause of concern for the government remains the growing positivity rate. The positivity rate was as low as below 4 percent in India in April, which is one of the lowest in the world. But, in the last few weeks, the positivity rate increased to 5 percent and yesterday, the figure was near 6 percent. 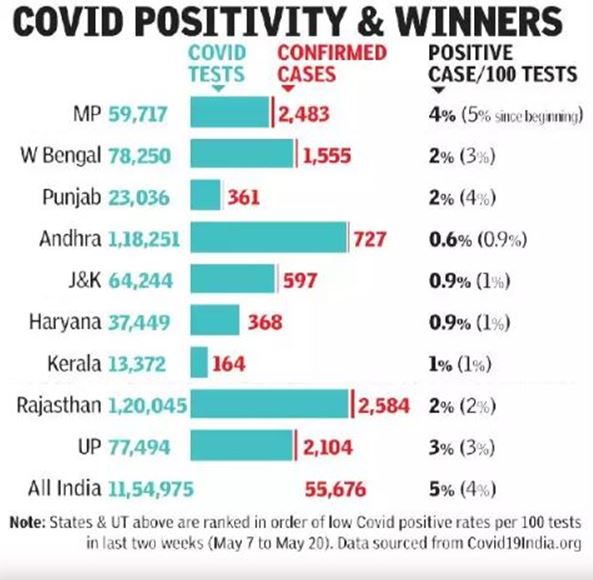 However, at the same time, the positivity rate is coming down in many states like Madhya Pradesh and remains below 2 percent in many big states like Andhra Pradesh, Rajasthan. So, while the curve is flattening in many states, Maharashtra and Gujarat remain a major cause for concern.

The biggest relief for the government is that the death rate in India is among the lowest in the world at 0.3 per lakh population, which is 15 times lower than the global average. 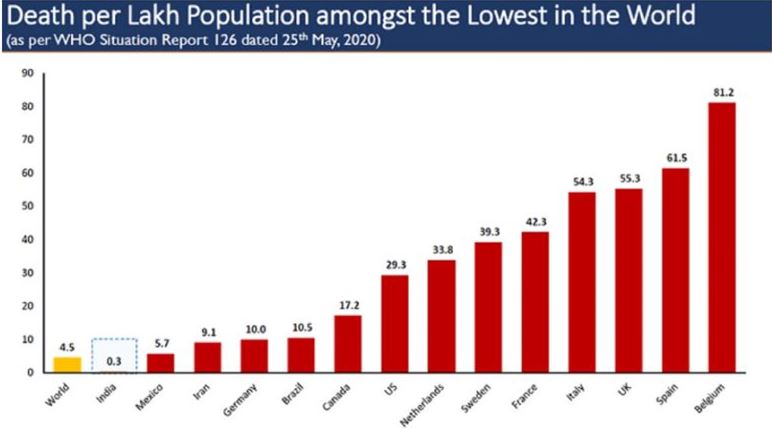 Be it BCG immunization, dietary habits, the Indian climate, or some other reason behind the low fatality rate, this is definitely the biggest plus point for the country. “In terms of fatality rate, we have surprisingly found a low fatality rate in India, which is very good. There are several hypotheses on this, but we can’t say anything clearly on any factor. Hope it continues,” Dr Balram Bhargava, director general, ICMR said.

As per the data from the Ministry of Health and Family Welfare, 70 percent of total deaths from Coronavirus have a Comorbidity (pre-existing medical conditions), which severely weakens their immunity. And this is the reason why the people already suffering from major illnesses are the ones who need to worry most from the virus.

R0, which is defined as the number of people one person can infect, has come down to 1.22 as per last week’s data. This means that one ill person is infecting only 1.22 people on average. India’s RO is consistently declining which means that flattening of the curve could be expected in the near term.

The average age of patients who succumbed

India has one of the highest recovery rates at 42.5 percent, and it seems that the lockdown has helped in improving the recovery rate. “When the first lockdown started, then the recovery rate was around 7.1%. The recovery rate during the second lockdown was 11.42%, which further rose to 26.59%,” Lav Agarwal, joint secretary, the Health Ministry said on Tuesday. On May 18, the date of announcement of fourth lockdown, recovery rate touched 38 percent and now it has reached above 42. So far, more than 65 thousand people have recovered out of 1.5 lakh infected people, and therefore, the total number of active cases is below 90 thousand.

Almost all states of the country are performing well and have something to boast in their fight against Coronavirus, except Maharashtra and Gujarat. Even West Bengal and Bihar, with all administrative failures of Mamata Banerjee and Nitish Kumar respectively, are better off than Maharashtra and Gujarat. These two states account for around half of total cases and more than half of total deaths.

Given the high population density and close proximity of human beings in cities, the urban folks are more exposed to COVID-19 than the rural population. And this is one of the reasons that most urbanized states like Maharashtra, Gujarat, and Tamil Nadu also account for the highest number of cases. And as cities run the engines of the economy, the ongoing fiscal is not going to be a good one, as long as the spread is not contained in urbanized states.

It is up to readers to draw inferences from the data and graphs mentioned in this article. The writer’s conclusion is that instead of taking a black and white view, the government should focus on states like Maharashtra and Gujarat where the positivity rate is high; the death rate is high, and the recovery rate is low. Other regions and states could go back to normal with precautions advised by the ICMR.