No Result
View All Result
Newswire
Baghdad security breach won’t be repeated: Iraqi PM 16 mins ago
Bolsonaro says ‘Dhanyavaad’ to Modi for vaccine exports 22 mins ago
Biden vows to work with Canada during call with Trudeau 34 mins ago
Father, son shot dead in Agra over a goat 43 mins ago
UK retail sales suffer record fall in 2020 52 mins ago
Madhur Bhandarkar on why he chose lockdown as subject for new film 1 hour ago
Next
Prev

This is not the first the time Congress has misused power

Ever since PM Modi launched Prime Minister’s Citizen Assistance and Relief (PM CARES)- an Emergency Fund to tackle the Wuhan infection, the left-liberal cabal has been up in arms wondering why a new Emergency Situations Fund had to be created when Prime Minister’s National Relief Fund (PMNRF) already exists.

Even though the government has made it clear that while the PMNRF deals with all kinds of natural disasters, PM CARES is more specific and deals exclusively with COVID-19 like Pandemic situations. Nonetheless, the left-liberal ecosystem continues to outrage about the creation of PM CARES.

While the peculiar object of PM CARES is clear, a new revelation puts the ongoing outrage against it into perspective. A press note from the time of creation of PMNRF clearly reveals how the Congress had deliberately created a deep conflict of interest as far as the Emergency Fund is concerned.

The Management Committee of the PMNRF consists of: 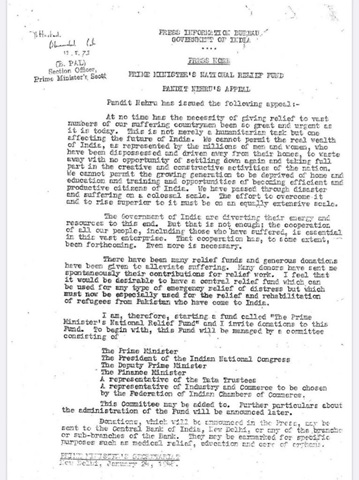 So, the Congress had its President in the Managing Committee of the PMNRF- an Emergency Fund constituted essentially to deal with Emergency situations that come up before the country. Launched in 1948, the PMNRF was essentially viewed in the context of the partition of undivided India in 1947, and the slaughter and genocide of Hindu and Sikh families that followed in Pakistan and the present-day Bangladesh.

This brings us to how PM CARES is very different from PMNRF. The latter being a creation of the Congress is highly centralised and the Prime Minister alone has the power to appoint a Secretary for managing the fund. There is no provision for separate office or staff to manage it. Moreover, the Prime Minister alone enjoys the powers of the disbursement and selection of beneficiaries.

PMCARES, on the other hand, is far more democratic as the Committee consists of three top cabinet ministers- the Home Minister, the Defence Minister and the Finance Minister, while the Prime Minister chairs the trust. There is clearly a greater sense of collectively responsibility and power-sharing associated with PM CARES.

But the left-liberal cabal cannot go beyond the Nehruvian era and still want to live in the age when India’s first Prime Minister Nehru was making all possible attempts to centralise institutions in the Indian National Congress, deliberately mixing party structure with the governmental machinery.

This was another vile attempt by the Congress to appropriate national legacy to itself, and this affront to the sacrifice of those who gave up their lives during the Jallianwala Bagh massacre was undone only last year by the Modi government when the Parliament passed the Jallianwala Bagh National Memorial (Amendment) Bill, 2019.

PMNRF and the left-liberal outrage that followed after the inception of PM CARES truly manifests how the Congress still cannot get over the privilege that it once used to enjoy as far as a thin line dividing the party organisation from the government machinery is concerned.

200000 Americans could die of Coronavirus: What the USA will do to China once the worst is over