Imran Khan's propaganda cannot hide the truth for the long

“Today we are not only opening the border, but also our hearts for the Sikh community,” is what Pakistan’s elected Prime Minister Imran Khan had said during the Kartarpur Corridor inauguration ceremony, around six months ago.

He had sought to use the inauguration ceremony as a PR blitz decades after Pakistan systemically tormented its religious minorities, including the Sikh community.

His claims, however, have been blown to smithereens in a single thunderstorm, during which as many as 8 domes of the Kartarpur Corridor collapsed, less than two years after they were constructed in the year 2018.

The Sikh community in Pakistan stands outraged today, as hollow claims of Rs. 16 billion being spent on the restoration of the Kartarpur shrine have been exposed with the pictures of collapsed domes that are coming in from the Sikh Gurudwara. 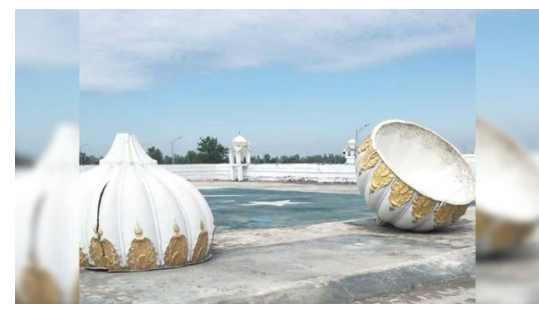 It seems that the large sums of money supposedly spent on the Kartarpur Sahib Gurudwara went into the pockets of Pakistan Army Generals, and the only real expenditure made was the massive PR campaign that Imran Khan ‘Niazi’ had kicked off during the inauguration ceremony.

Pakistan charges US $20 to the Sikh devotees who visit the Gurudwara in a practice inconsistent with the Gurudwaras across the world. While Kartarpur Sahib itself seems to have become a prolific source of revenue generation for the Islamic Republic of Pakistan, Pakistan itself doesn’t seem to spend a single penny on the upkeep of the Sikh shrine.

In fact, Pakistan’s maliciousness was on display from the very beginning with the sheer Khalistani propaganda around the Sikh shrine. Ahead of the inauguration itself, Pakistan’s Ministry of Information and Broadcasting had released a 4-minute video clip that was replete with anti-India content.

The video featured photos of three separatists- Jarnail Singh Bhindranwale, Major General Shabeg Singh and Amrik Singh Khalsa, in the backdrop with “Khalistan 2020” written on it, in a clear reference to the “Referendum 2020”, a publicity stunt by a handful of pro-Khalistan secessionism supporters.

An ‘Indian bomb’ was also put on display at the shrine by Pakistan claiming that it was dropped by the Indian Air Force (IAF) during the 1971 war.

But while Pakistan Prime Minister Imran Khan uses Kartarpur Corridor to claim benevolence towards Sikhs, while trading barbs with India over the Kashmir issue and alleging minority persecution in India, the falling domes at Kartarpur expose his hollow agenda.

The domes that collapsed at the Sikh shrine are a part of the series of excesses that Pakistan has been committing on religious minorities. Pakistan has been denying food to Hindus and Christians, which has drawn flak even from the US Commission on International Religious Freedom (USCIRF).

Rights of Sikhs themselves have been aggressively trampled upon in and around Kartarpur over the recent past. The shrine itself was attacked by Islamist radicals earlier this year, and last year a Sikh granthi’s daughter was forcibly converted and married to a Muslim woman in Nankana Sahib, the birthplace of the first Guru of Sikhs, Guru Nanak.

Ironically, Imran Khan started his PR exercise during the Kartarpur Corridor inauguration that was held on the 550th birth anniversary of Guru Nanak.

The collapsing domes at the Kartarpur shrine are thus latest addition in the series of Pakistan’s actions constituting State-sponsored genocide of its religious minorities.

31 members of a single family in Delhi’s Jahangirpuri continuously violated lockdown. All of them are Corona positive now