Non-tribals get killed in Meghalaya over ILP demand, while mainstream media blames it on CAA

They report on Northeast only after twisting the facts

The capital city of Meghalaya, Shillong, is tense again as the clashes between the Khasi Students Union (KSU) members and alleged Bangladeshi immigrants last week in the Ichamati area of East Khasi Hills near the Indo-Bangladesh border, have now spiralled into a spate of attacks on non-tribals.

Violence and a spate of stabbings have rocked Meghalaya’s capital city, Shillong. This chain of violence started when a meeting was organised in Ichamati by the KSU.

After the meeting, violent clashes took place as the KSU members had tried to set a house on fire by burning a haystack at the edge of the market. Stone pelting ensued from the side of alleged Bangladeshi immigrants injuring a KSU activist who later succumbed to his injuries.

This triggered a wave of xenophobic attacks and stabbings upon the non-tribals. After the violent clashes in Ichamati area, the KSU held a meeting in Shillong which was followed by a wave of intense violence in the capital.

In the ensuing violence, 2 non-tribals have been killed thus far. Rupchand Dewan, a 31-year old tomato seller from Barpeta, Assam was killed on February 29.

#ShillongViolence update: Names of the deceased and the injured in Bara Bazar knife attack.

Two stabbing cases were also reported on March 1. 37-year old Uphas Uddin was stabbed to death at 2:45 AM in his house, while 28-year old Aditya Kumar was stabbed with a broken bottle resulting in his death. A total of seven stabbing incidents have taken place in the capital city of Meghalaya.

The present pro-ILP agitation essentially traces its origin to December when xenophobic fears were spread in Meghalaya about the influx of Bengali Hindu population into the state owing to the CAA, even though 97 per cent of the state falls in the Schedule VI of the Constitution, thereby exempting it from the operation of the Citizenship Amendment Act.

Now, the fears of a staunch demand to push through the ILP regime turning violent have come true. And as such it is the non-tribals who are bearing the brunt of this violence. Meanwhile, the local media is downplaying the issue with misleading reports.

This is the reason why the local media- outlets like The Shillong Times have labelled the stabbing spree as attack on non-tribals by ‘masked miscreants’, while the same media outlets were enthusiastically reporting the attack on the KSU activists as non-tribals attacking tribals. This time around, the role of KSU in slipping Shillong into anarchy is clear, but the local media is still actively safeguarding the students’ union. 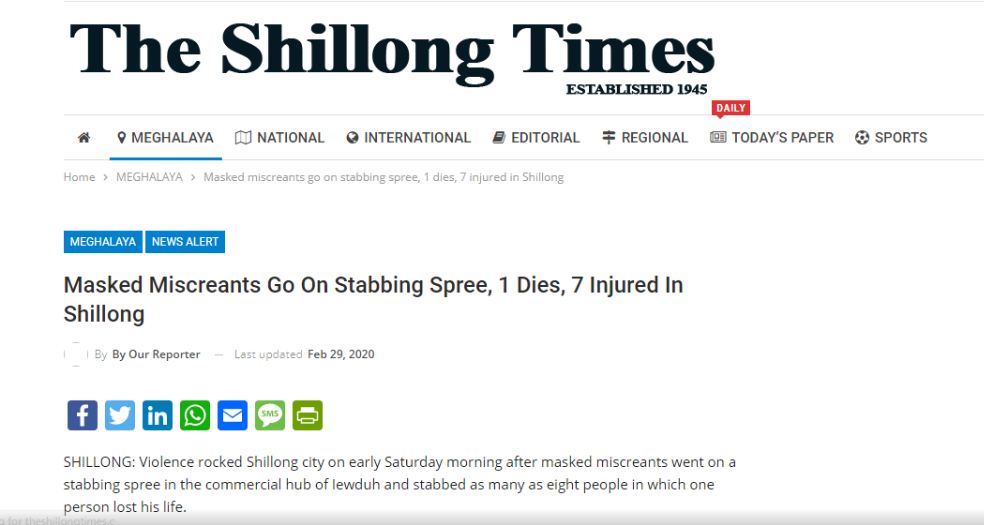 Violence started taking grip of Shillong at round about the same time when Delhi was shocked by intense riots in a particular part of the national capital. The mainstream media found a perfect opportunity to corner Modi government by masquerading the pro-ILP violence as an anti-CAA agitation.

In this tweet, for instance, Ashok Swain has directly held the “discriminatory” Citizenship Amendment Act as responsible for the three deaths in Shillong.

Modi's discriminatory Citizenship Act kiIls 3 more in Meghalaya! As I had said before 2019 election, India will not be able to survive Modi's this five years. https://t.co/LnnsgBsA3x

Similarly, The Print founder, Shekhar Gupta has also labelled the xenophobic killings on Shillong as “anti-CAA protests” in “faraway” Meghalaya.

In fact, almost the entire mainstream media has been passing off the pro ILP, xenophobic killings as “anti-CAA unrest”.

The Khasi Students Union (KSU) is an influential organisation in the state leading the chauvinistic Khasi elements. It has been pushing for the ILP for quite some time and to set the record straight, it doesn’t bear any relation, immediate or proximate with the CAA. The ILP demand and attack on non-tribals troubled Shillong even when the CAA was not even approved by the Modi government.

In fact, attack on non-tribals, described as ‘dkhars’ in a derogatory manner have been facing attacks and violation of rights over the past four decades. In fact, the ‘dkhars’ faced violence even in 2013 when the Congress was in power- both in Meghalaya and the Centre, and the CAA was not even in picture.

ILP supporters had set a non-tribal trader, a tea stall owner identified as Bisheshwar Das on fire. The tea stall owner had later succumbed to the burn injuries. The minority non-tribals and their businesses were regularly attacked in the state, the gruesome murder of Bisheshwar Das being the most gruesome and heart wrenching of all such incidents of violence and killings.

ILP demand and violence against non-tribals have nothing to do with the CAA as is being suggested by the mainstream and local media. The demand has always been violently put forth by organisations like the KSU- a students’ body that borders on a militant outfit. Whenever it wants to press its demands, it steps up the heat by slipping the state into anarchy, and given its stronghold over the tribal dominant population in the state, it mostly gets to have its way out.

Businessmen in some North Eastern states need to pay ‘Hafta’, if they want their businesses to survive

There are places in India where Indians cannot go without Visa like “Inner Line Permits”. It’s stupid and unfair

This time around the KSU seems to have realised that the Modi-Shah duo was already facing a lot of nefarious propaganda from the vested interests over the CAA. So, they struck when they felt that the enemy is weak. This is what seems to have caused the fresh spate of violence, stabbings and killings against the non-tribals. A manipulative mainstream media has however spun this into an anti-CAA agitation.

You can not escape from Yogi: UP Police busts illegal Bangladeshi settlement racket run by Rohingyas