Demography is destiny: Why and how Europe became the epicentre of Coronavirus and recording high fatality numbers

Italy reported most deaths after China

by Amit Agrahari
in Europe

As the fear of Coronavirus grapples the world, Europe has been declared the new epicentre of the disease by World Health Organization. Italy, the country in southern Europe on the bank of Mediterranean Sea, has become the second most affected country by the disease. Few other highly affected countries are France, Germany, and Spain.

Iran, South Korea, and some countries from Southeast Asia are also affected, but they have been able to control the situation and casualties from the disease have been very low compared to those in Europe. In Europe, the casualty has been very high and the disease is spreading very rapidly. Italy has completely shut down the country, and quarantined more than quarter of its population.

So what is the reason behind a disease originated from China is spreading so rapidly in Europe. Well, it is the demographic profile of the countries in the continent, especially those in Western and Southern Europe, the highly developed ones with a very high median age.

Many scientists and scientific journals have argued that older people are being more affected due to Coronavirus disease, given their low immunity. Italy, the most affected country is Europe, has median age of 46 with 60 percent of the people aged above 40. Majority of the people dying from the disease are older people. As per a report by science journal, Lancet, the average age of people died due to Coronavirus disease in Italy is 81.

In other countries of Europe too, the median age is very high. The continent is home to some of the countries with oldest demography. Monaco, a small country in the continent has the highest median age at 53.1, with male at 51.7 years and female at 54.5 years. 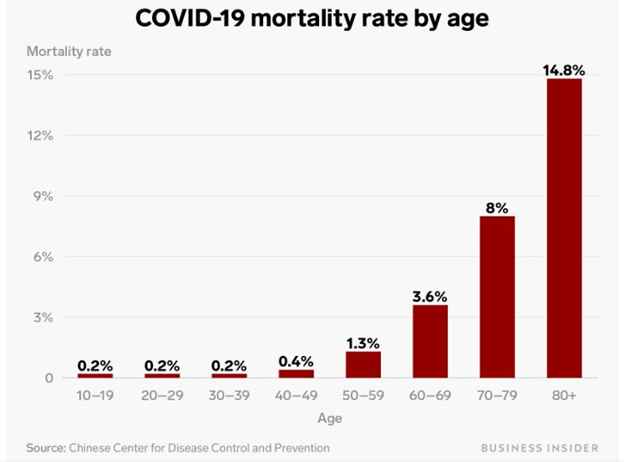 The health organizations have issued advisory that the people above the age of 60 must be completely quarantined. As most of the people of older age have some other disease like cardiovascular disease, diabetes, chronic respiratory disease, and therefore, they are being more affected. The death rate among the people who have preexisting condition is also very high.

India has one of the lowest affected population and mortality rate is also very low, given its young demography. In the country, so far, two deaths have been reported, and both are of 76 and 68 years of age.

Some magazines like Time wondered why India has so low number of cases and argued that the country is under-reporting the casualties. ‘Fact checker’ AltNews was source for the Time, but these people, who consider themselves rational and atheist, could not reason out that the young demography of the country is reason behind the low number of fatality. Therefore, India is by and large, safe from large scale of spread of the virus.

India, Please Help us: How the outbreak of Coronavirus reinforced Indian leadership not just in South Asia but in the world

'We do not want Marxists and Naxals,' UP Congress rebels against the Central leadership

Why Google loves China? Google is banned in China, but it gets big dollars as ad revenues from Chinese firms

#StandWithIndia – India beats China in the perception war with support from the US, Australia, Taiwan and Hong Kong