Together they can make a company with 45 crore customers

As Vodafone Idea lands on the brink of collapse with the SC’s order for payback of dues, the telecom sector and banks are at serious risk of instability. The SC ruled that telecom companies will have to pay 1.47 lakh crore rupees, and Vodafone Idea, with red all over its financial books, is set to be impacted most.

If Vodafone Idea files for bankruptcy, the telecom sector will head for duopoly with BSNL-MTNL as a marginal player. The gross debt of the Vodafone is 1.15 lakh crore rupees and the company has an asset of around 30,000 crore rupees, including cash & market capitalization. If the company goes bankrupt, the lenders to the company, most of which are public sector banks, will bear the losses. 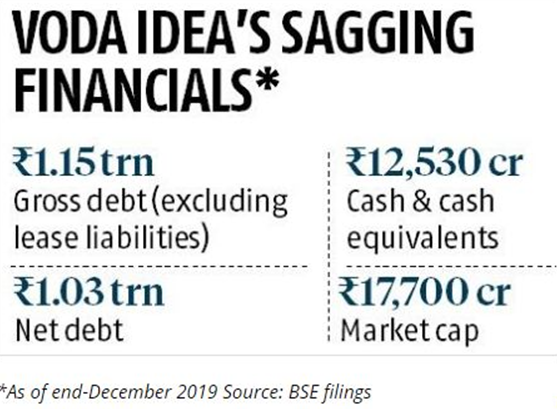 “If there is a negative impact on any enterprise, it impacts a larger ecosystem, whether it is banks, whether it is employees, whether they are vendors, consumers, so everybody gets impacted. So, that impact, when it comes, we will have to pay the price,” said SBI Chairman Rajnish Kumar.

Therefore, to save the telecom sector from duopoly which is neither good for the market nor the consumer, the best bet would be ‘to nationalize Vodafone Idea and merge it with BSNL-MTNL. The government has already said that they are no intentions to close down BSNL- despite the 70,000 debt of the company and successive yearly loss- as it is a strategic asset.

Replying to a question in Rajya Sabha, Telecom Minister Ravi Shankar Prasad said, “We consider BSNL and MTNL as strategic assets, as they have come to the aid of the people during natural calamities. There were problems with these companies, but we will revive them soon. Don’t be under this impression that BSNL and MTNL will be shut down. We have infused a revival package in them and I assure you that these companies will not be shut down.”

The Modi government is mulling over capital infusion of 15,000-20,000 crore rupees in BSNL. Investing these resources in acquiring Vodafone would be the best bet as the government will get another 33 crore consumers.

The merger would also save the subscribers of Vodafone, who, otherwise, would have to look for other companies. As India heads for 5G market, and given the importance of people’s data in future National security and cyber warfare, having a national player with the largest customer share is a good idea. And the government have to spend only 16,000-17,000 crore rupees for that, which is less than the public sector’s bank’s exposure to the company.

‘Only after 2014,’ BJP needs to be credited for propelling Northeastern leaders into big mainstream icons

After handing over victory to AAP, Congress leaders are now fighting amongst each other