Rahul Gandhi denigrated Indians when he mocked Vande Bharat Express and Make In India. Today, he is eating his own words

by Hitesh Bansal
in Opinions

In what can be called a huge achievement and proud moment for India, on 15th February, the indigenous, Made in India, Vande Bharat Express (Train 18) completed 1 year since its inauguration. The train, which offers world class facilities to travellers, has completely revolutionized train travel in the country. Premium, comfortable and high speed- Vande Bharat Express has brought about a positive image of Indian Railways and introduced luxury train travel for the masses. The train itself is a huge success, raking up about Rs 93 crore revenue, which is a record for the Indian Railways.

Although the success of Vande Bharat Express is being celebrated across the country, there is one individual who is completely sour and sullen. That person is none other than Rahul Gandhi.

A year ago when the Vande Bharat Express had broken down because of a glitch, Rahul Gandhi had shamelessly resorted to mocking the train. Not realising that electronic machinery is prone to such breakages, and able and diligent Railway workers are working 24/7 to ensure the train runs smoothly, the Gandhi scion had taken to Twitter in an attempt to tarnish the Government’s Make in India initiative. 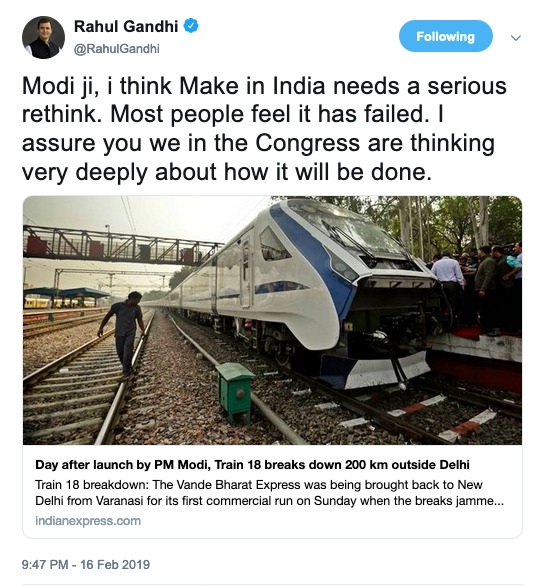 Rahul had resorted to petty politicization and had disregarded the years of efforts that had gone into indigenously manufacturing the train. He had also mocked the efforts of the countless Indians who had worked hard to make this a success. Ironically, they were the same people whose vote he was garnering after, when he made this comment.

The Gandhi scion would have realized by now that ‘Make in India’ does not need a rethink. The people have rethought and have again voted Modi Government to power. The grand old party should instead think about their own irrelevance in the Indian political scenario. Congress in their years of rule couldn’t empower India to manufacture its own trains and are good for only mocking those who can.

Vande Bharat Express was the 1st of its kind in terms of speed, facilities and passenger convenience. Additionally, the train has sate of the art security arrangements and a GPS based audio visual passenger information system. Travel experience on the train is truly unmatched.

Moreover, since then, the Modi Government has also introduced the 2nd Vande Bharat Express between New Delhi and Katra, which has been immensely popular as well, specially for the devotees of Maa Vaishno Devi. The train has been such a huge success that the government has further planned to roll out 44 rakes of the Made in India train, which is going to completely transform the Indian Railways.

A development focused government will keep on bringing enhancements for the comfort of the passengers whereas the Congress party will keep mocking their efforts from the sidelines.

Today, after a year of its successful run, Rahul Gandhi is surely eating his own words. The Gandhi scion has a penchant of embarrassing himself as he is often obtusely unaware of the ground reality. In doing so, he not only embarrasses himself, but brings the entire Congress party down with him. Petty politics and agenda based speeches are one thing; but to let down the morale of the fellow citizens is completely unacceptable. Modi Government’s Make in India initiative should be celebrated as it is solely aimed at enhancing domestic production and empowering the Indian citizens, while making the country self reliant. Every time, Rahul Gandhi demoralises and mocks the hard work of the citizens, he will end up eating his own words, and it’s high time he learnt this.

Congress MLAs rebel against their most powerful CM. Amarinder Singh govt in trouble in Punjab

‘Atheism won’t help in elections,’ Communists in Bengal decide to pander to Hindus for 2021 elections