On Jan 23, Raj Thackeray is all set to claim the Hindutva legacy of Bal Thackeray

A few days ago, Raj Thackeray, the party chief of MNS, met with top BJP leaders including former Chief Minister Devendra Fadnavis. This triggered the speculation of an alliance of MNS with the BJP, and a possible change in ideological orientation of the party, which, so far, has ‘Marathi manoos (sons-of-the-soil)’ as primary as sole ideological issue.

Raj Thackeray could make an important announcement in party conclave on January 23- the birthday of Bal Thackeray. Reports suggest that Raj Thackeray might add Hindutva in the party’s core ideology.

In the newly released posters of the party for the party conclave, the slogan after the son of the soil plank is that of Hindu Nationalism, espoused by Veer Shivaji. The party will try to occupy the space left by Shiv Sena. The Uddhav Thackeray led party compromised on the issues of Marathi Manoos (son of the soil plank) and Hindutva, to ally with NCP-Congress. 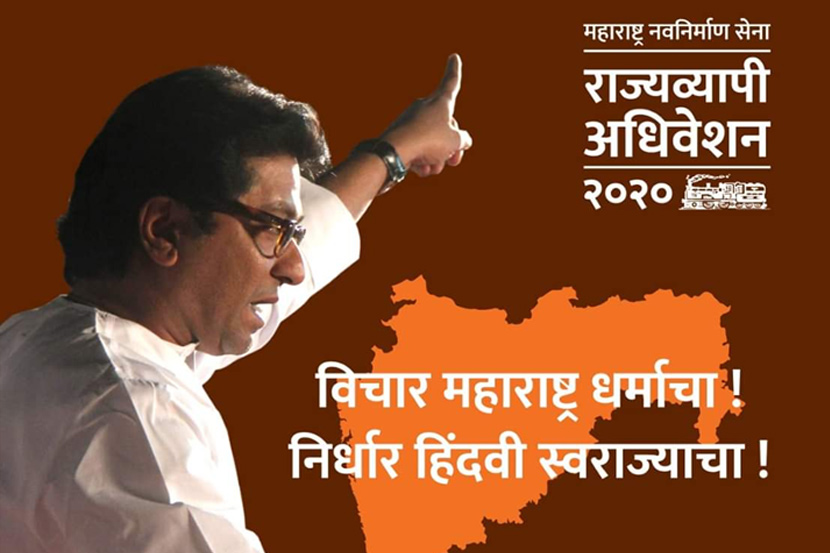 This has infuriated many younger party workers, who left the party after the alliance government was formed. Balasaheb Thackeray, the patriarch of Shiv Sena, built the party on these core issues, and the party’s alliance with BJP was also on Hindutva grounds. But, the ‘political advisors’ like Sanjay Raut managed to convince Uddhav Thackeray to trade off the ideology for the CM chair.

Therefore, the party dulled its stance on the Ram Mandir issue, criticized the internet ban on Kashmir, and many other crucial ideological issues. In fact, Shiv Sena’s leftward turn has been so stark that, Uddhav Thackeray compared the attack on JNU students with 26/11, which only brain dead, conspiracy theory believing a Communist would do.

Raj Thackeray, who learnt politics from his late uncle and Shiv Sena patriarch, could see that there is space vacated for Hindutva and son of the soil politics. And Raj Thackeray, given his family legacy, is the best person to fill this space.

Raj Thackeray praised and supported PM Modi in 2014 election; later in 2019 general election, he turned into a critic, but never on the core ideological issues like Hindutva. Through his political career, Raj Thackeray fought elections on Hindutva and son-of-soil issues, just like his uncle, and never compromised on them.

The date of the party conclave- 23rd January- has great symbolic importance, as it is the birthday of Bal Thackeray, whose legacy Raj Thackeray wants to claim. Raj Thackeray has always seen himself as successor of late Hindutva icon, and therefore, when Bal Thackeray announced that Uddhav Thackeray will be his political heir, Raj left the Shiv Sena to form MNS.

Raj Thackeray is a legitimate inheritor of Bal Thackeray’s politics in terms of personality, political oratory, and almost every other political trait. He delivers speeches on the same fashion; chants the same slogans; is a great crowd puller and so on.

On the other hand, Uddhav Thackeray has none of the traits of a popular politician, and therefore he is playing second fiddle to Pawar family members, despite contributing the maximum number of seats in the alliance. He has been made titular head of state, a de jure leader, put on the chair only to sign on the decisions taken by alliance partners. The plight of Shiv Sena could be witnessed in the portfolio distribution of ministries, where all the significant posts went to NCP.

Raj Thackeray would definitely benefit at the cost of Shiv Sena if he deploys his strategy carefully, as the voter base of both parties is the same. BJP, on the other hand, would find another partner in Maharashtra, which it could call a natural ally, given the ideological similarity. If the parties decided to join hands, both of them benefit at the cost of Shiv Sena.

‘Only after 2014,’ BJP needs to be credited for propelling Northeastern leaders into big mainstream icons

‘Not afraid of the Army,’ Imran Khan quivers as Pakistan army generals give him sleepless nights

“Why no autopsy on Gandhiji’s body?” Subramanian Swamy calls for probe into Mahatma Gandhi’s assassination

‘Enemy’s enemy is a friend,’ Turkey gets a taste of Chanakyan realpolitik as Jaishankar comes into action