BRD, Gorakhpur Vs JK Lon, Kota. Kids died in both the cases. First was national news, second not even a ticker

Why every outrage of the opposition is political?

by Animesh Pandey
in Analysis

Kota, the city famous as India’s coaching hub, is once again in the news, but for the wrong reasons. Since last month, almost 77 kids have died due to the sheer negligence in a local hospital, but nobody is ready to take responsibility for the same, be it the local administration, or even the state government for that matter.

According to media reports, the infants admitted in JK Lon Hospital of Kota were suffering from HIE or Hypoxic Ischemic Encephalopathy [HIE], which is a serious condition where the brain ceases to function due to lack of proper oxygen supply to the brain, resulting in death. As per the current reports, 77 children have died in JK Lon Hospital in the current month, with 10 kids dying within the last 48 hours. However, instead of coming out clean or even assuring of investigating into the root cause, the hospital has been found downplaying the issue, saying that the situation is not so harmful.

Head of Pediatrics Department, Amrit Lal Bairwa, “According to national NICU records, 20% deaths of infants are acceptable, whereas the death per cent in Kota is 10-15, which is not alarming as most of the infants were rushed to the hospital in critical condition. Patients come from Bundi, Baran, Jhalawar and also from Madhya Pradesh in critical condition. One of three infants and newborns die here daily.” 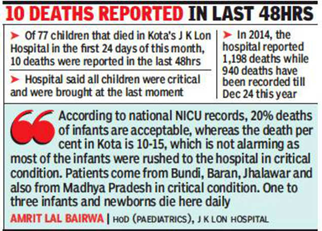 However, the reality is way different from the official claims. To mention a report of India Today, the death rate of this hospital is comparatively very high. In 2014, 1198 infants died due to the disorders as mentioned above, and by 24 December this year, 940 deaths have been reported. As such, the defence presented by the hospital management to hide their sheer negligence is rather lame. According to a report by Times Now, reports of sewage leak have also emerged from the hospital, leading to serious infections.

Interestingly, this is the figure of a single hospital in Kota. Ever since the Congress led government under the leadership of Ashok Gehlot has assumed power, Rajasthan has been in news for almost all the wrong reasons. If this is the case of one hospital here, imagine the plight of the rest of the hospitals in Rajasthan.

Even the Lok Sabha speaker and MP from Kota, Om Birla, had to address the issue as he tweeted, “I’m deeply concerned by the tragic death of 10 infants within 48 hours. Rajasthan government should immediately take due action and show some empathy” –

Apart from the tweets, Om Birla also wrote a letter to Ashok Gehlot, explaining the need to look into the allegations of apathy leveled against the hospital administration of JK Lon Hospital, due to which 800 to 900 infants and approximately 200 to 250 kids die every year.

Now if we focus carefully on the issue in hand, it is proved without doubt that the administration of JK Lon Hospital is clearly at fault. However, what is even more stinging is the way the mainstream media is refraining from openly talking out about this issue; forget taking CM Ashok Gehlot for the massive negligence.

With this, one tends to even remember the year of 2017, when an identical incident rocked the city of Gorakhpur. In BRD Medical College, due to the epidemic of Japanese Encephalitis, more than 60 infants had died in less than a week. When it was ascertained that the children died due to dearth of oxygen cylinders, the media blew the case out of proportions and without even looking into the nitty gritty of the issue, they hauled Yogi Adityanath over the coals, who was barely a few months old as the CM of Uttar Pradesh. The media was literally baying for the blood of Yogi Adityanath, and demanded his immediate resignation.

As if this wasn’t enough, the media made a hero out of the nodal officer, Dr. Kafeel Khan, who turned out to be one of the main reasons behind the tragedy as well. Apparently, Dr. Kafeel Khan had procured many oxygen cylinders for the hospital on an emergency basis, for which he allegedly paid from his own pocket. When he was sacked by the hospital administration and replaced by Dr. Bhupendra Sharma, the media attempted to make a hero out of him. However, police investigations brought out the ultimate truth: Dr. Kafeel Khan was no hero, as he was found stealing oxygen cylinders for his own private clinic.

The media turned into a sort of supercop on the Gorakhpur tragedy, dictating UP government on ethics and administration. However they deliberately ignored the fact that the tragedy of BRD college was more of criminal negligence by the local administration, and the epidemic of Japanese encephalitis was such, that even if the administration was well prepared, the recurring epidemic would’ve claimed at least a few lives. Even after such daunting circumstances, the Yogi government was instrumental in bringing down the death rates due to this disease in the state.

The efforts shown by the UP government and officials have begun to bear fruits, the results clearly indicate a drastic fall in the number of deaths caused due to Japanese encephalitis and Acute Encephalitis Syndrome. Out of a total of 1,427 reported cases of AES and JE in the state till August 9, 2018 there have been a total of 111 deaths. A drastic fall both in the number of cases reported and in the casualties which occurred, if we take into accounts the figures from 2014 onwards. As compared to the figures of August 2018, there have been 5,850 deaths in 2014, 6,917 in 2015 and 6,121 in 2016 all arising alone from Japanese encephalitis. As of 2nd September 2017, the disease had claimed another 1,317 lives which included the lives lost in the Gorakhpur tragedy.

While fingers had been pointed at the CM Yogi led BJP government the mainstream media had forgotten to point out the havoc this disease caused every year and how the earlier governments in the state have neglected it or at best sidelined the devastation it caused year after year.

However, what has occurred in JK Lon, Kota is certainly something not to be ignored and is clearly not pardonable. What hurts even more is the way the media has revealed their hypocrisy on this issue. Their souls are hurt only when the tragedy occurs in a BJP ruled state, and even more in a state ruled by a saffron clad monk like Yogi Adityanath. If the situation is reversed, the media will not care to even look towards the dead, forget outraging over the same. Are the kids of Rajasthan no kids? Do their lives have no value in the eyes of Indian media?

Rafale, Anti-Satellite Weapon and much more, 2019 a golden year for India’s defence preparedness

200000 Americans could die of Coronavirus: What the USA will do to China once the worst is over