Newswire
Coronavirus response overwhelmed by politics in US (News Analysis) 1 hour ago
3 labourers trapped in stone mine, rescue operation on 2 hours ago
2nd Test: Shaw fifty helps reach 85/2 at Lunch on Day 1 2 hours ago
Trump sends Pompeo for signing of US-Taliban peace deal 3 hours ago
US stocks end mixed after volatile trading 3 hours ago
Daniel Craig not ‘allowed’ to drive iconic James Bond car 4 hours ago
Next
Prev

The trailer of the much-awaited biopic starring Ajay Devgn, ‘Tanhaji – the Unsung Warrior’ finally streamed on YouTube and other online platforms. Directed by Om Raut, the movie, based on the exploits of Maratha braveheart Tanaji Malusare, stars Ajay Devgn in the titular role, apart from Saif Ali Khan, Kajol, Sharad Kelkar, Luke Kenny and Padmavati Rao in other principal roles.

Apart from the impressive visuals, the most impressive fact is the unapologetic praise of the ideals of Bharat, especially the Sanatana Dharma, or what the world knows as the Hinduism. A mainstream Bollywood film rarely glorifies the ideals of Sanatana Dharma, as it actually is, without maligning for the sake of pseudo-secularism. However, ‘Tanhaji’ doesn’t only include such ideals, it also makes us relive the era in which the Marathas fought for the liberation of India from the Mughal imperialism.

However, if a movie unapologetically praises the essence of Bharat through its characters, it surely wouldn’t go down well the left-liberals.

Needless to say, the liberals went aghast at the very idea of Sanatan Dharma being glorified and left no stone unturned in terms of bashing the trailer left, right and centre, with their absurd analogies. This isn’t surprising; after all how someone would like the glorification of a real hero like Tanaji or Chhatrapati Shivaji, if he/she is too fond of the brutality meted out by invaders like Khiljis, Tughlaqs, Mughals etc.

Probably that is why the left-liberals cried hoarse on the trailer of ‘Tanhaji’ moments after its release. Many journalists even tried to label it as a part of the grand conspiracy of ‘saffronisation by BJP’. If one looks at the tweet thread of journalist Dipanjana, who is related to Hindustan Times, one shall find that such people are yet to recover from the shock of the trailer’s unapologetic treatment towards Sanatan Dharma. Be it connecting the theme of the film with RSS, or mocking the colour saffron, spreading racism and casteism, underestimating Chhatrapati Shivaji, or even finding ‘toxic masculinity’ in the film, you just name it and Dipanjana has mentioned it all in her tweet thread. To quote one such tweet, “Maybe the idea was to coordinate Tanhaji’s trailer launch with International Men’s Day (also today) since the trailer suggests the film is all about machismo.”

🚨Thread alert.🚨 There are far more pressing issues in the news today, but the trailer for Tanhaji: The Unsung Hero has dropped. That too on World Toilet Day. (How's that for subliminal messaging?) https://t.co/vE37VIJ8Cf Please don't miss the spelling of "films". pic.twitter.com/imTjiKpj1t

Apart from this, HT’s focus was also more on tweets mocking Ajay Devgan and targeting ‘Tanhaji’ in the name of finding social media reaction. But Hindustan Times was not alone in this; other Liberal journalists also targeted ‘Tanhaji’ like a loose pack of wolves.

What ‘The Wire’ did for ‘Uri – The Surgical Strike’ is now being done in both English and Hindi by The Quint for ‘Tanhaji’. In Hindi, they used saffron power as a mocking term for ‘Tanhaji’, whereas in English, The Quint asked such questions that would put even the weirdest media coverage to shame –

‘Was Lack of Paper the Real Reason for the Downfall of the Mughal Empire?’

‘Did the Marathas Make Weird Flexes Before It Was Cool?’

‘Why Are the Elephants All Giant?’

‘Is Zip Lining With Swords the Worst Adventure Sport Ever?’

‘Is Tanhaji Also a Naagin?’

‘P.S.: When Did the Battle of Sinhagad Turn Into a Surgical Strike?’

Relax, these are not our questions, but The Quint have asked themselves. But upon seeing their reporting, some people got amazing complex, and they thought, “How dare they report worse than us?” The Quint merely asked ludicrous questions, but The Lallantop in its reporting declared the trailer of ‘Tanhaji’ as a threat to the society [Yes, let that sink in]. If you do not believe us, then look at this – 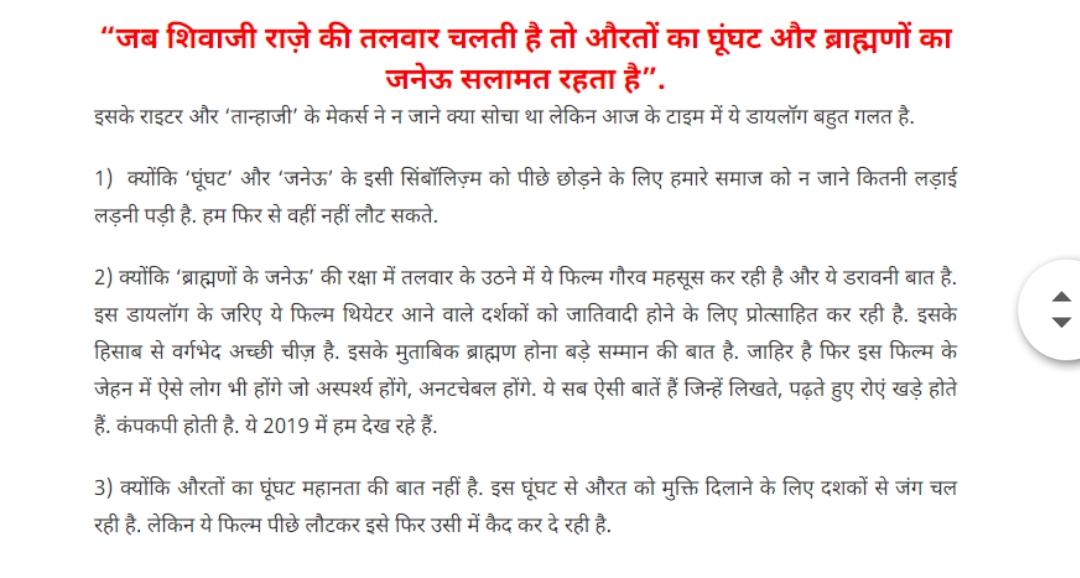 The above translates as follows –

“When the sword of Shivaji Raje moves, the honour of women and the sacred thread of Brahmins remain safe”.

The writers and the makers of ‘Tanhaji’ probably did not think before writing this down, but in today’s time, these dialogues are very wrong –

1) Because our society does not know how many battles had to be fought to leave behind the symbolism of ‘Veil’ and ‘Janeu’. We cannot return there again.

2) Because this film is feeling proud in raising the sword in defense of the ‘janeu of Brahmins’ and it is a scary thing. Through this dialogue, this movie theater is encouraging the audience coming to be racist. According to this, class discrimination is a good thing. According to this it is a great honor to be a Brahmin”.

However, this is nothing at all. Some people were so hurt by the glorification of Tanaji Malusare by Bollywood that they started trending ‘Thanks Mughals’ on Twitter.

That means that India never existed without the Mughals. By the way, weren’t these the same folks who claimed that India never existed before the arrival of the British? Either they were lying then, or they are lying now. Looks like the trailer had hit the target straight because apart from the liberals, the anti-India elements are equally scared by the magnitude of the trailer. If ‘Uri – The Surgical Strike’ had robbed their sleep, then ‘Tanhaji’, would surely give them living nightmares.