IRCTC stock has left the tracks, it is now flying

Indian Railway Catering and Tourism Corporation (IRCTC), the catering arm of Indian railways became the most subscribed Public Sector Unit (PSU) ever. Incorporated in 1999, IRCTC was granted the Miniratna (Category-I Public Sector Enterprise) status in 2008. The IRCTC IPO has emerged as one of the most valued initial public offerings (IPOs) among public-sector undertaking (PSU) IPOs ever. The huge demand for shares of IRCTC, despite the slowdown in the economy, is a vindication of the intrinsic value investors see in the PSU.

The Indian government diluted 12.6 percent stake in the company in initial public offering (IPO) 2.02 lakh shares at the base price of 10 rupees per share. But, the investors demanded for 225 crore shares of the company and total bid was worth 72,000 crore rupees at the upper price band. The shares were sold at price band of 315-320 rupees per share.

The market listing of IRCON International Ltd., RITES Ltd., Rail Vikas Nigam Ltd, IRFC Ltd. and IRCTC Ltd was approved in April 2017, and as of now all of them except IRFC have been listed. Earlier in June, NITI Aayog Vice Chairman Rajiv Kumar said that the government may privatise 46 CPSEs in the next few months.

There are 331 Central Public Sector Units CPSEs with an investment of 12, 50,373 crore rupees at the end of the fiscal year 2017. Bharat Sanchar Nigam Ltd, Air India Ltd and Mahanagar Telephone Nigam Ltd are among the worst performers in public sector companies. 82 CPSEs made losses of 25,045 crore rupees and the number of loss-making CPSEs has grown from 54 in 2007-08 to 82 in 2016-17. As per PM Modi’s vision of ‘Government has no business to do business’, these CPSEs should be privatized. 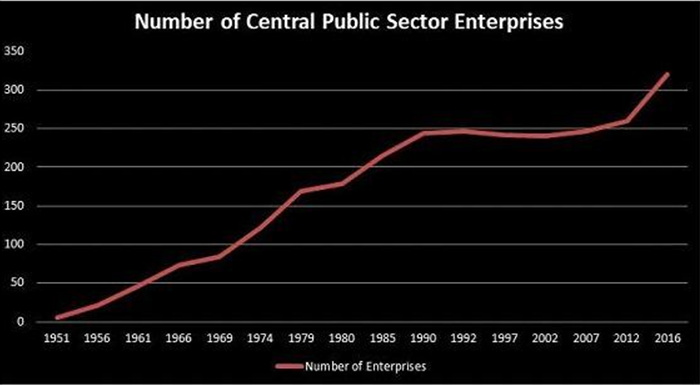 The Indian economy was growing at so-called Hindu Rate of Growth (A term coined by establishment economist Raj Krishna, he blamed Hinduism for the low economic growth and argued that India could never grow at a faster pace due to Hindu culture) due to socialist economic policies. The economic growth of the country was slow “because of those very socialist policies that their kind had swallowed and imposed on the country, our growth was held down to 3–4 per cent, it was dubbed — with much glee — as ‘the Hindu rate of growth,” said business journalist and author Arun Shourie.

Modi government is not a follower of the socialist economic model and wants India to become a rule of law based capitalist economy. Therefore, the government decided to privatise many loss-making PSUs in the first term. The Modi government is turning more aggressive on privatisation in its second term.