Modi govt may privatise 46 PSUs in the next few months

Central Public Sector Enterprises (CPSEs) have a very influential presence in the Indian economy today, almost three decades after economic liberalization. A CPSE is any company in which the central government has at least 51 percent of paid-up share capital. The emphasis on the import substitution model of development during the Nehruvian years led to the formation of many public sector companies in the initial years of independence.

There are 331 Central Public Sector Units CPSEs with an investment of 12,50,373 crore rupees at the end of the fiscal year 2017. Bharat Sanchar Nigam Ltd, Air India Ltd and Mahanagar Telephone Nigam Ltd are among the worst performers in public sector companies. 82 CPSEs made losses of 25,045 crore rupees and the number of loss-making CPSEs has grown from 54 in 2007-08 to 82 in 2016-17. As per PM Modi’s vision of ‘Government has no business to do business’, these CPSEs should be privatised. 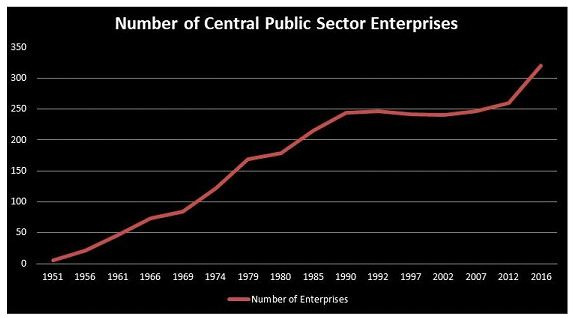 The government may privatise 46 CPSEs in the next few months, said NITI Aayog Vice Chairman Rajiv Kumar. The government will also reform the labor laws and will create land banks to accelerate the process of industrialization. “They (foreign investors) will have reasons to be happy. You will see a slew of reforms I can assure you of that. We are going to pretty much hit the ground running,” said Kumar to Reuters in an interview.

With the new finance minister at the helm of state affairs, some path-breaking reforms are expected. The newly constituted parliament will start functioning from 17th June and the budget would be presented on 5th July. The Economic Survey which was stalled as the government was seeking reelection will be tabled a day before the budget presentation. As far as economic reforms are concerned, “We should (start with the banks)..There will be big bang, there will be 100 days action. We are all geared for that … I have maintained that the fiscal policy should be counter cyclical. There is scope for that,” said Kumar.

The Indian economy was growing at so-called Hindu Rate of Growth (A term coined by establishment economist Raj Krishna, he blamed Hinduism for the low economic growth and argued that India could never grow at a faster pace due to Hindu culture) due to socialist economic policies. The economic growth of the country was slow “because of those very socialist policies that their kind had swallowed and imposed on the country, our growth was held down to 3–4 per cent, it was dubbed — with much glee — as ‘the Hindu rate of growth,” said business journalist and author Arun Shourie.

Modi government is not a follower of the socialist economic model and wants India to become a rule of law based capitalist economy. Therefore, the government decided to privatise many loss-making PSUs in the first term. The government will be more aggressive on privatisation in the second term.