Spinning a non-news to give it a political twist is something that the Magsaysay-award winner Ravish Kumar has definitely perfected in. In a Facebook post addressed to the Indian Railways Minister, Mr. Piyush Goyal, which the NDTV reporter posted as he so painstakingly wrote from Manila, Philippines, has claimed that many students have been left behind and have not been able to fill the forms of  RRB Group D exams. Ravish Kumar goes on to say that though several students subsequently got the chance to fill the form, several others have still been left out due to petty reasons like discrepancies in their photographs. He goes on to question whether rejecting forms for such petty reasons makes sense, and if it does, the students should be adequately communicated. But when TFIPOST dug deeper into the facts, it found gaping holes in Ravish Kumar’s claims. 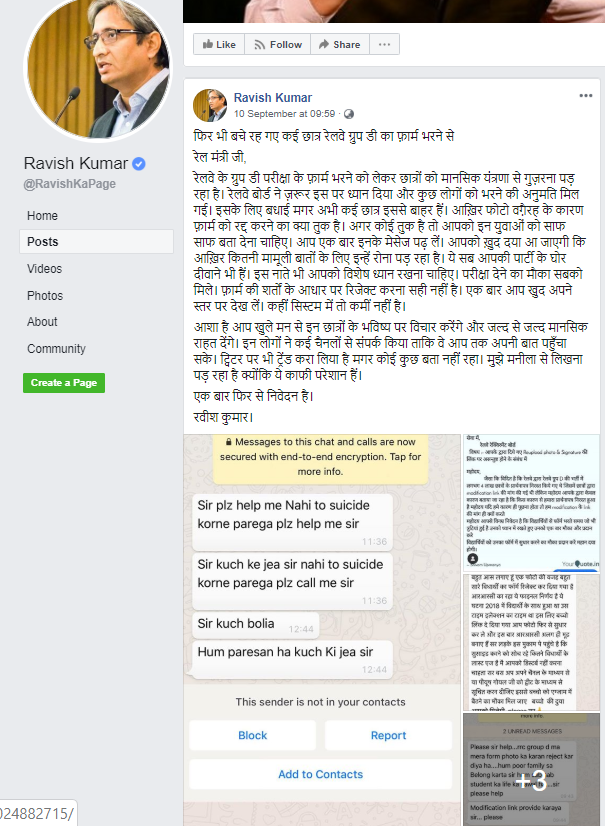 “In total 1.15 crores candidates filled the application from various places all over the country. On scrutiny, total 1.10 crores applications were found to be in order which means an overwhelming majority of candidates i.e. 96% of the candidates filled the applications correctly after reading the instructions carefully,” reliable Railway sources have told TFIPOST, when it asked the railways whether the claims made by the reporter had some substance or not. A very small percentage (4.1 percent) was found invalid due to discrepancies in photograph and signature uploaded by the candidates. Just like any other school or central level examination, some candidates are bound to commit mistakes in the application forms and therefore, it should not come as a surprise if few of them are rejected. It is imperative that Ravish Kumar understands that the photographs and signatures are important tools in checking impersonation at different stages of the recruitment process. These help in smooth conduct of examination and provide fair competition to deserving and genuine candidates. If there is any discrepancy in photograph and signature the same cannot be overlooked. But even so, the railway tried to accommodate the rejected applicants contrary to Ravish Kumar’s claims.

“To ensure that no candidate’s application is rejected on invalid ground, all rejected applications are subjected to scrutiny by a Committee of Officers, before uploading on the net. The candidates whose applications were rejected were advised through e-mail and SMS were given an opportunity to represent against rejection through a link that was uploaded on websites on all participating RRBs,” said the railways official who sought to address Ravish Kumar’s claims. The Railways official further explained that the link was available to the candidates from 17.08.2019 to 23.08.2019, giving them ample time to go through their applications once again.

But Ravish Kumar saw it as an opportunity to politicise the issue without going through the details. The online registration of application was opened on 12.03.2019 and the closing date for the same was 12.04.2019. “Thus complete one month was provided to the candidates to read and understand the instruction and fill the application form carefully.” Total 1,61,435 (which is 1.4% of the total applications) number of representations were received and the same were scrutinized by the three Member Committee and the applications (4482 no.) were found in order and accepted.

It is clear as day that proper processing of applications had been undertaken and as a special case additional opportunity was given to the candidates for raising objections and their grievances were addressed with due diligence.  Needless to state the Railways are committed to holding fair and transparent recruitment. But still, some journalists like Ravish Kumar time and again do not miss out on the slightest of opportunity to belittle the government and ridicule it without doing proper research on their parts and this is a travesty that Indian media and its pseudo-liberal journalists are going through right now.

Because Elections are over: IndiaSpend’s FactChecker takes down its discredited #HateCrimeWatch database