In what can only be described as yet another instance of shoddy reporting and misinterpretation by the mainstream media, several reports have surfaced suggesting that PM Modi called up the US President Donald Trump with regard to the Kashmir issue. This gave the impression that the Modi government which had shown a brave face by abrogating Article 370 of the Constitution, suddenly succumbed to international pressure on this major issue. In fact, AIMIM chief Asaduddin Owaisi, immediately questioned PM Modi’s act of calling up the US President on a bilateral issue between India and Pakistan.

Several media outlets including International Business Times, The Pioneer, Financial Express and Livemint published reports, suggesting mostly directly and some indirectly that it was PM Modi who called up the US President. 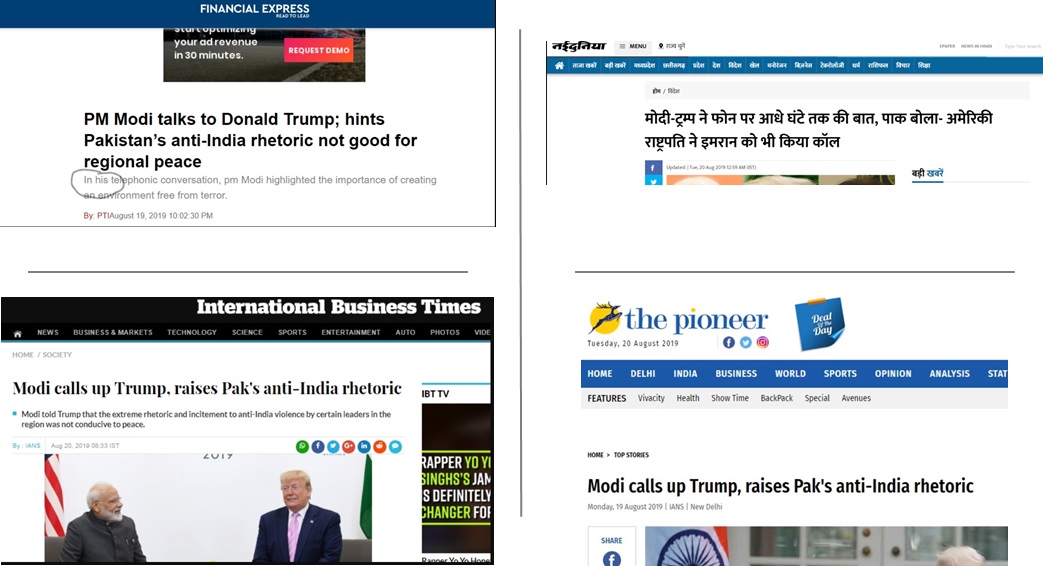 How does that look? A disconcerted Indian PM calls up US for moral support. But the reality was that Trump called both the PMs. Who calls whom makes all the difference. But it seems that the mainstream media outlets did not pay much attention to who called whom. And a slight change of wording gave a completely false impression of the real turn of events. It paints a very weak and uncharacteristic picture of PM Modi whose words and actions have always made it clear that he has absolutely no intention of internationalizing India’s internal matters.

The fact remains that in the current atmosphere, PM Modi enjoys a very comfortable position. India has proven twice that its defense forces are more than competent to respond to any Pakistani misadventure and as such Pakistan is in no position to escalate things from here on. It had to pay exorbitant diplomatic costs along with extensive damage to the terror infrastructure that it openly sponsors. If there is anyone who is likely to call the US President Trump, it has to be the Pakistan PM Imran Khan who is facing domestic pressure and diplomatic isolation.

Secondly, President Trump’s tweet on his conversation with both PM Modi and Imran Khan holds the key to the real turn of events. He tweeted, “Spoke to my two good friends, Prime Minister Modi of India, and Prime Minister Khan of Pakistan, regarding Trade, Strategic Partnerships and, most importantly, for India and Pakistan to work towards reducing tensions in Kashmir. A tough situation, but good conversations!” Moreover, there is nothing in his tweet which would even remotely suggest that PM Modi dialed US President Trump. In fact, his tweet only gives the impression that it was he who called up the Prime Ministers of the neighbouring countries. In his tweet, he makes it clear that he had a telephonic conversation with both PM Modi and the Pakistan PM Imran Khan. Now, it has to be the mother of all coincidences for both India’s PM and Pakistan’s PM to call President Trump and discuss the same issue in quick succession on the same day. Ordinary prudence suggests that it must have been the US President who called up PM Modi and Imran Khan. India Today, which carried a report on Trump’s tweet, has rightly reported, “Tough situation, good talk: Donald Trump tweets after dialing Modi, Imran Khan on Kashmir.”

Spoke to my two good friends, Prime Minister Modi of India, and Prime Minister Khan of Pakistan, regarding Trade, Strategic Partnerships and, most importantly, for India and Pakistan to work towards reducing tensions in Kashmir. A tough situation, but good conversations!

Lastly, it must be understood that anyone who has followed PM Modi’s career, knows, that he is a man who maintains good relations with other countries but never looks up to them for decisions and support. Even amateur, self proclaimed geopolitical analysts see him as a highly inward looking political leader who would never go out of the way and reach out to others in key policymaking issues. The media spin which has now been rectified by most media outlets was a slight change in the wording but had the deep impact of creating a strong impact on the readers’ mind.

[Review] If you like Hindu bashing and mediocre entertainment, Sacred Games is just the right series for you

Planning to buy a Chinese smartphone? Think again. They could be Modi govt’s next target and for good reason

Indian Navy rejects HAL choppers: HAL has failed the Indian Armed Forces and must be shut down

‘Stop the Baloch Army or pay the price,’ China’s message to Pakistan is clear as BLA hurts CPEC