A major tax relief is on the cards for the taxpayers of the country. The government-appointed panel on Direct Tax reforms submitted its report to the finance ministry and has suggested some fundamental changes for simplification of taxation process and broadening of tax net.

The taxpayers in the income bracket of Rs 5 lakh and Rs 10 lakh will benefit from the proposed reforms as they will have to pay lower 10% income tax. “Effectively, people having income up to Rs 5 lakh will have to pay zero tax. Tax will be charged for income between Rs 5 lakh and Rs 10 lakh at 10% and an individual can save up to about Rs 37,500 a year (at the higher end) under the proposed regime,” said a person aware of the developments. Currently people earning up to 10 lakh rupees per annum are taxed at 20 percent. 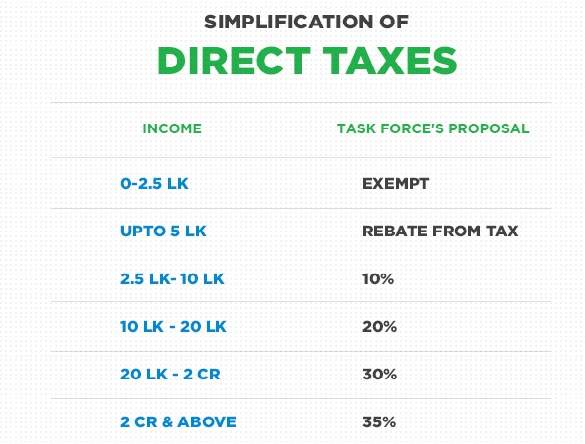 The number of tax brackets will be changed from three (5%, 20%, and 30%) to five (5%, 10%, 20%, 30%, and 35%) if the proposal is implemented. Previously the government has constituted a committee under the leadership of Central Board of Direct Taxation (CBDT) member Akhilesh Ranjan to overhaul the Direct Tax system.

The government of India is also considering the proposal of a flat 25 percent corporate tax on all firms in a bid to revive the animal spirits of economy. Currently, foreign companies operating in India without a subsidiary are taxed at 40 percent while the domestic companies with above 400 crore rupees annual turnover are taxed at 30 percent. India has one of the highest corporate tax rates in the world which ranges between 25 to 40 percent. As a developing country, India needs capital to encourage economic activity among market players but such a high taxation has kept the activity low.

In last few days, finance minister held a series of meetings with all stakeholders of Indian economy. The industrialists, representatives from distressed auto sector, people from capital markets, and the economists from right side of the political spectrum who support Modi government but were visibly upset over some socialist measures met with finance minister and expressed their concerns. They also suggested some corrective measures on which government is brainstorming. Therefore, the Modi government is expected to take more measures for bringing back the animal spirits of Indian economy.

Om Birla to take care of MLAs who scream, fight and create ruckus in state assemblies