In a bid to revive the animal spirits of the Indian economy, the government of India is considering some major changes in direct tax code. The Direct tax code report given to the government by expert committee has proposed a flat 25 percent corporate tax on all firms.

Currently, foreign companies operating in India without a subsidiary are taxed at 40 percent while the domestic companies with above 400 crore rupees annual turnover are taxed at 30 percent. India has one of the highest corporate tax rates in the world which ranges between 25 to 40 percent. As a developing country, India needs capital to encourage economic activity among market players but such a high taxation has kept the activity low.

Even capital rich western countries levy lower taxes on their companies. The corporate tax rate in western world varies between 20 to 30 percent compared to 25 to 40 percent in India. The proposal to levy a uniform tax rate on all companies will make the compliance easy and simplify the taxation process. “Quite a few recommendations in the report are path breaking, in tune with realities of 21st century. Recommending cut in corporation tax rate to 25 per cent is a great move in the right direction, especially when a lot of competitive economies are cutting rates,” said Arun Giri, group editor, Taxsutra.com. 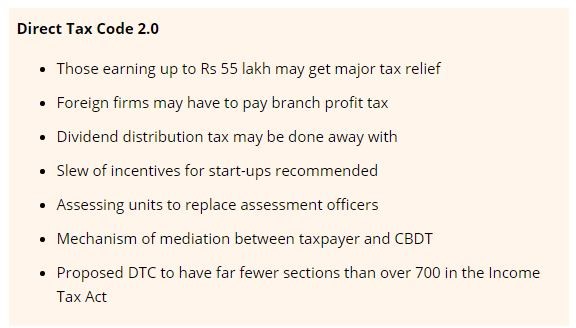 On the individual income tax, the people earning up to 55 lakh rupees per annum may get major tax relief after implementation of new tax code. This would be major relief to the middle class and upper middle class which has slashed the spending in last few months. The decline in consumption which comprise more than two third of Indian economy is due to the declining middle class consumption. The slowdown in automobile and real estate sector is also due to decline in consumption. The tax relief would encourage the consumers to spend more which would be beneficial for the economy.

As per a report by ET Now, the finance ministry is working on a package to capital markets which have performed poorly over last few months. The package may include some tax reforms including the removal of levy on LTCG. The government is also planning to remove income tax surcharge on Foreign Portfolio Investors (FPI) which was introduced in union budget presented on 5 July by finance minister Nirmala Sitharaman.

In last few days, finance ministers held a series of meetings with all stakeholders of Indian economy. The industrialists, representatives from distressed auto sector, people from capital markets, and the economists from right side of the political spectrum who support Modi government but were visibly angry over some socialist measures met with finance ministers and told their concerns. They also suggested the corrective measures on which government is brainstorming. So, the Modi government is expected to take more measures for bringing back the animal spirits of Indian economy.