by Akriti Tyagi
in Analysis
0

While the order essentially states that all provisions of the constitution, as amended from time to time, will apply to the state of Jammu and Kashmir, which altogether negates the need for article 370; the present order also paves way for the complete abrogation of the article.

To ensure the possibility of this otherwise perceived to be implausible occurrence, the President, through the order, has amended Article 367 of the Constitution, which takes care of the technicalities and the “wordings” of article 370 which were preventing its dissolution. Through the Presidential order, “Constituent Assembly of the State” will now be read as “Legislative Assembly of the State” in article 370 of the constitution, paving way for its revocation.

The state of Jammu and Kashmir was acceded to India in the year 1947 when Maharaja Hari Singh signed the instrument of accession. It is pertinent to note that the instrument signed did not specifically give any added privileges to the state and it was the same as all other acceded principalities, relating to matters of defence, foreign affairs and communications. However, even though the other principalities later signed merger agreements, J&K ceased to and hence article 370 was incorporated, enabling the state to have its own constitution.

From the beginning itself, Article 370 was intended to be a temporary provision, for a smooth transition of the Constitutional provisions to the state. The article provided that only those laws made by the parliament will be applicable to the state which relate to matters specified in the instrument of accession. Moreover, any laws enacted by the parliament will only be applicable to the state once the same have been ratified by the president and the state government.

Article 370 in itself may not seem to be quite as aversive to the unity of the country, but, the laws which it gave rise to are the ones which have led to this division. Using article 370, article 35A was incorporated in the constitution in the year 1954, through the Constitution (Application to Jammu and Kashmir) Order, 1954. It specified that any law enacted by the state, which specifies a class of people as the state’s citizens or confers upon those citizens any special privileges as far as employment under the state government, acquisition of immovable property, settlement or aids by the state government go; shall not be invalid.

Thus, while article 370 paved the way for the incorporation and legal admissibility of the Constitution of Jammu and Kashmir; article 35A ensured special privileges to certain citizens specified in the constitution.

To say that the practical applicability of the provisions was fraught with issues would be an understatement. The constitution of J&K defined a permanent resident (PR) in the state and only made provisions with respect to people who were living there till 1954. Thereafter, the state legislature had the power to declare any individual as a citizen of Jammu & Kashmir, which was often exercised arbitrarily. This is resulted in gross violation of fundamental rights and unfair discrimination towards individuals living in the state who weren’t given the status of PR.

This has also rendered the state of J&K to be relatively undeveloped, as the articles are a hindrance to investments through multinational corporations and businesses.

Moreover, the presence of a separate constitution had segregated the state of J&K from the rest of the country, leading to a situation of separatist emotions when the emphasis should have been on integration.

Therefore, Article 370 of the constitution, which had originally been enacted on a temporary basis to ensure a smooth integration of J&K, had in fact become the biggest factor for its segregation.

While it was clear that article 370 had to be removed, alongside 35A, which would have led to the Constitution of Jammu and Kashmir invalid, the right way to go about it could not be determined.

The title of the article read, “Temporary provisions with respect to the State of Jammu and Kashmir”, but yet had been present since the past 70 years. This is because of a niche statement in the provision which states “this article can be declared inoperative only after recommendation of the constituent assembly of J&K”. This constituent assembly came in existence in the year 1951 and was dissolved in the year 1957 when the constitution of J&K came to be adopted. Unfortunately, the assembly dissolved itself without recommending the dissolution of the article and thus the provision became a permanent entity in the constitution, something which was not the original intention of the drafting committee.

This situation seemed fine to the subsequent governments, and in their ignorance they failed to see the atrocities these articles were bestowing on the citizens living there.

Last year, the Supreme Court on a petition by Kumari Vijayalakshmi Jha had held that since the Constituent Assembly of the state ceased to exist, the President would not be able to fulfill the mandatory provision of getting its recommendation for its abrogation. Thus, article 370 had acquired a permanent status in the constitution.

The Constitution (Application to Jammu and Kashmir) order, 2019 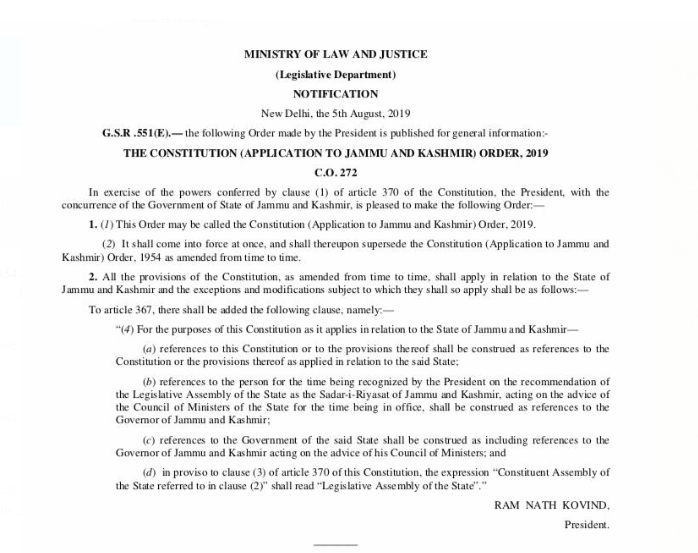 The president, through this order first of all superseded the 1954 order, ensuring that the amendments brought about the order are reversed. This order essentially scraps article 35A of the constitution.

This renders the constitution and J&K and special status bestowed on the citizens invalid, however, the root cause of the problem, article 370 which was the biggest issue has been dealt with, in the most ingenious of ways.

Article 370 was first rendered irrelevant, given the fact that constitutional provisions will now be applicable to the state of Jammu and Kashmir, as and when they come into being, as opposed to following the “special procedure” as laid down in the article. However, to completely rid the constitution of the article, the order amended article 367 of the constitution, to include certain terms with respect to the state of Jammu and Kashmir.

This essentially changes the text of sub clause 3 of Article 370 of the constitution to read as- the article shall cease to be operative if declared by the President and recommended by the “Legislative Assembly of the State”.

Hence, the Presidential order has repealed article 35A and has paved way for abrogating article 370 of the constitution, an occurrence which until now had seem implausible.