In the second term too, the government has kept the officials accountable. The Home Ministry and Finance Ministry granted premature retirement to many officials on the charges of corruption and substandard performance.

The railway ministry is working on the same ethos to hold the officials accountable. On 15th July, Piyush Goyal had stated “With action being taken against some officers who have integrity issues, the right message is going to people. Even in the Railways, we are now studying the profiles of many officers to see if some action can be initiated against them to send the right message.”

With action being taken against some officers who have integrity issues, the right message is going to people.

Even in the Railways, we are now studying the profiles of many officers to see if some action can be initiated against them to send the right message. pic.twitter.com/vsK2sMeytq

The work towards cleaning the Railways of such officials have already started. According to a Dainik Bhaskar report, a station master has been punished with premature retirement as two trains came on the same line due to his carelessness. Muzaffarpur railway station master Sunil Kumar Singh gave the signal to Sampark Kranti to pass through line 1 of Gauraual railway station while there was already a passenger train on the same line. 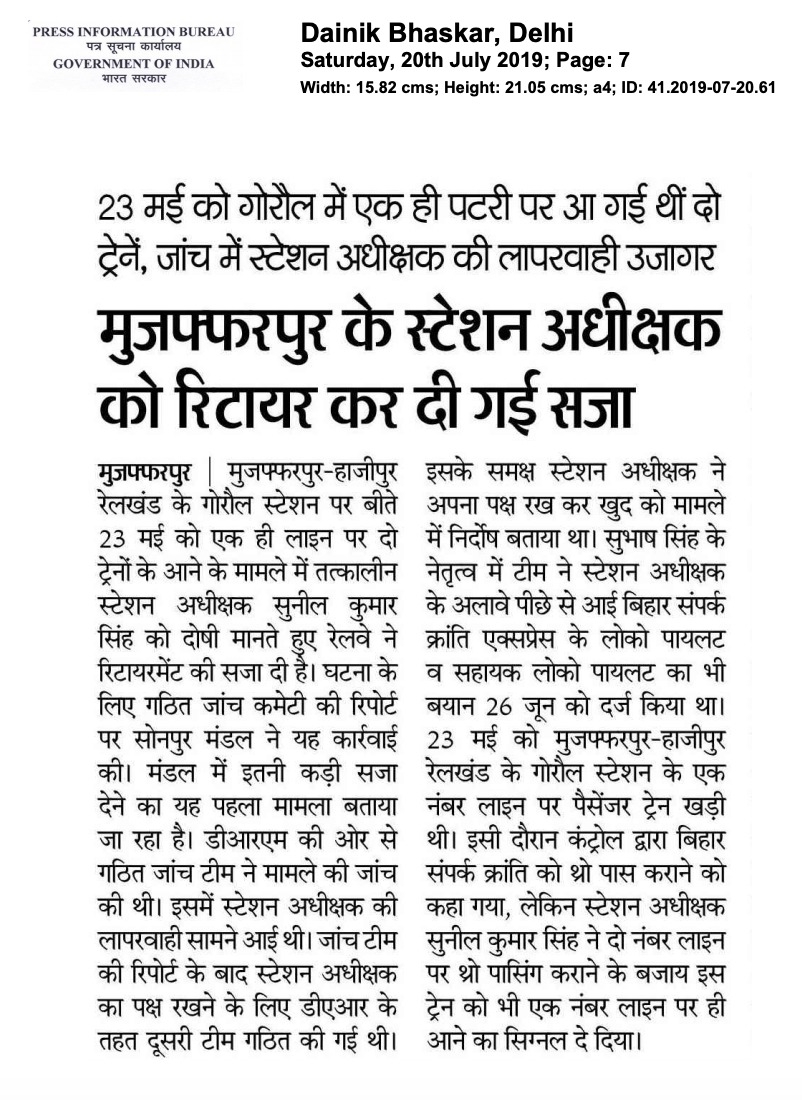 The work culture in the government is infamous for lethargy and inefficiency. Employees got timely appraisals without so much as making an effort for it. Rampant corruption was a contributing factor in the inefficiency as well. Employees were not under any obligation to work because government jobs came with an assurance of employment till working age and pensions after it and to top it all, promotions were a given. You spent a certain number of years in rank and then get promoted to the next automatically. And then came the Modi government in 2014 and things started to change.

Piyush Goyal went on to change the ‘Babu culture’ and tried to bring accountability and transparency in the system. There is a fundamental change in the working model of ministries too. Piyush Goyal has had a long tenure as a corporate executive and so he was opposed to the lackadaisical and infamously known as ‘bureaucratic attitude’ of the railway employees. Therefore the ‘perform or perish’ mantra was adopted for railway employees. The ministry also introduced productivity linked bonus (PLB) for non-gazetted employees to send the clear message that performance and performance alone will decide promotions or bonus.

There are multiple examples when Goyal has strictly ensured transparency in the functioning of the ministry. The deadline-driven policy execution has meant that the usual pace and file pushing would no longer work and that has meant bureaucrats working rather than dodging accountability.

The introduction of ‘corporate work ethics’ has made the railways significantly efficient but those who shy away from work are not happy with it. The introduction of ‘corporate work ethics’ will make the government and public sector companies more efficient. This is the face of new India which is an economy driven by a rule-based meritocracy, and one must thank Piyush Goyal for the change.